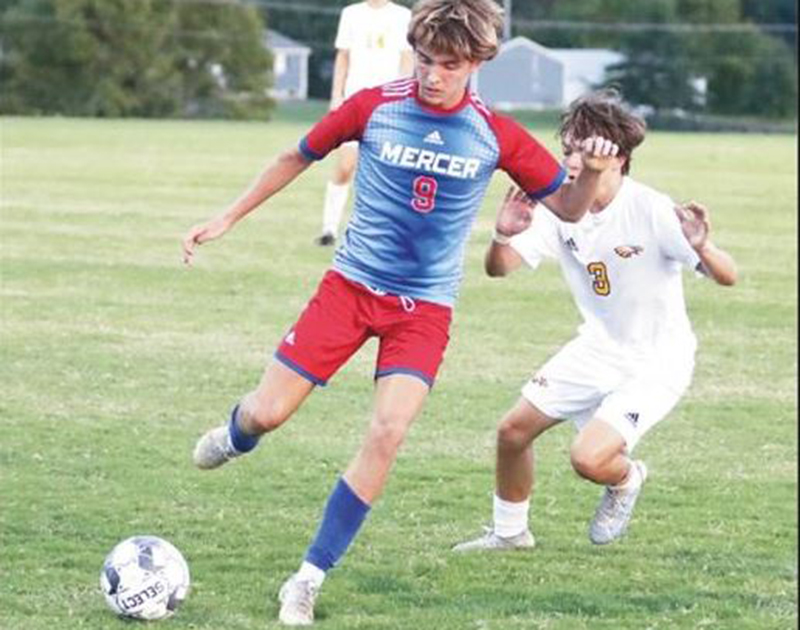 (The Harrodsburg Herald/David Carpenter) Liam Potts gets past a Franklin defender during the Titans’ 4-2 victory over the Flyers on Thursday, Sept. 1.

Mercer started the game with a more defensive lineup than they usually play. Beau Brown was back in his old spot as a defensive mid with Wilson moving to center mid.

The Titans first scoring opportunity came from senior Troy Diaz-Ward getting a corner kick that found Sam Walls in the box for a header, but it was stopped and Wilson’s follow up shot sailed over the goal (6′). The Flyers pressured the Mercer goal with Kamron Maddox altering the shot in the box to keep the game scoreless (11′).

Wilson had a good feed up ahead to freshman Jack Gammon, but the Franklin keeper gathered the ball before Gammon could get a shot off (16′). Franklin’s attack had a few looks at the goal with a free kick that went over the goal and senior keeper Jase Cocanougher making a save (18′, 19′).

Forte Bess made his first impact on the offensive with a shot from the middle that was just right of the goal (23′). Diaz-Ward had a great cross in front of the Flyers goal, but no one was in position to finish (27′).

Mercer’s aggressiveness on offense paid off with Diaz-Ward collecting a missed pass from Wilson and scoring with a bottom right shot past the Franklin keeper (32′), 1-0. The Titans followed up their goal with a great run from Brown down the left sideline and fed the ball up ahead to Diaz-Ward who crossed it to Nolan Johnson in the box for another goal (33′), 2-0.

The first half ended with Ian Devensky taking a shot well over the Franklin goal (38′).