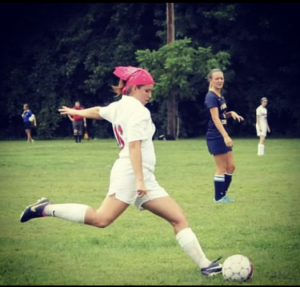 Photo Submitted
Sam Travillian played 81 games for Mercer and had 35 goals, 71 assists and helped the Titans make it to the 12th region championship twice.

A 2015 Mercer County Senior High School graduate, Sam Travillian went from leading the Titans on the soccer field at Mercer to leading the Pioneers off the field as head coach of the Campbellsville University Harrodsburg (CUH) women’s soccer team.

Travillian played for the Mercer County Titans girls soccer team from 2011 to 2014, she scored 35 goals and had 71 assists. She played in all possible 81 games of her career at Mercer with a record of 47-28-6.

Her favorite memory from her time as a Titan was the deep playoff run the team made her freshman year, making it to the region championship and finishing the season with a record of 17-4-1.

She was also selected to the 12th region all tournament team her junior and senior year. Travillian’s time as a Titan had a bitter ending as she tore her ACL and meniscus early into Mercer’s first game of district play in her senior season.

Travillian earned a scholarship to play for the St. Catharine Patriots in 2015 which was a year before the college closed due to “low enrollment and debt obligations.” Travillian was awarded rookie of the year as a freshman, but with her college shutting down, teammates scattered across different colleges and feeling like she would never be the same coming off her injuries, Travillian decided to end her playing career. She transferred to the EKU Danville campus and began helping the Mercer girls soccer team under Josh Culver. Travillian spent three seasons as an assistant coach for the high school team and one season as the head coach for the middle school team. She graduated early from EKU in 2018 with a bachelors in arts majoring in English while also being on the dean’s list every semester.

Knowing she wanted to pursue a career in education and coaching, Travillian enrolled in the University of the Cumberlands for her masters in teaching. She also taught ninth and tenth grade English at Boyle County high school at the same time. In 2020, Travillian was first hired on to the CUH soccer staff to serve as the second assistant coach behind Paul Brooks and the late Garrett Stark. COVID proved to be the biggest opponent for the Pioneers in 2020 with the team playing two games. In 2021, Travillan graduated from the Cumberlands with her masters and became the full time head coach for the CUH Women’s soccer team.

In her first season as head coach the team only had 13 players on the roster, but they were able to play six 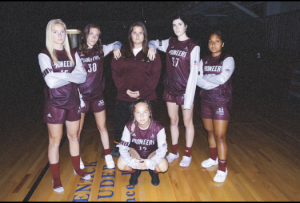 Photo Submitted
Sam Travillian played 81 games for Mercer and had 35 goals, 71 assists and helped the Titans make it to the 12th region championship twice.

games finishing with a 2-3-1 record. One of their wins was against Great Lakes Christian who went on to win the national championship. The Pioneers had to withdraw from the region tournament after losing two players to bad concussions in the same game leaving the team with only 10 available players in an 11 player sport.

to make a competitive push in the region tournament. Her team is still very young with only freshmen and sophomores. Travillian plans to host a Lady Pioneers ID camp on Dec. 11 to help get her recruiting started for the upcoming season.