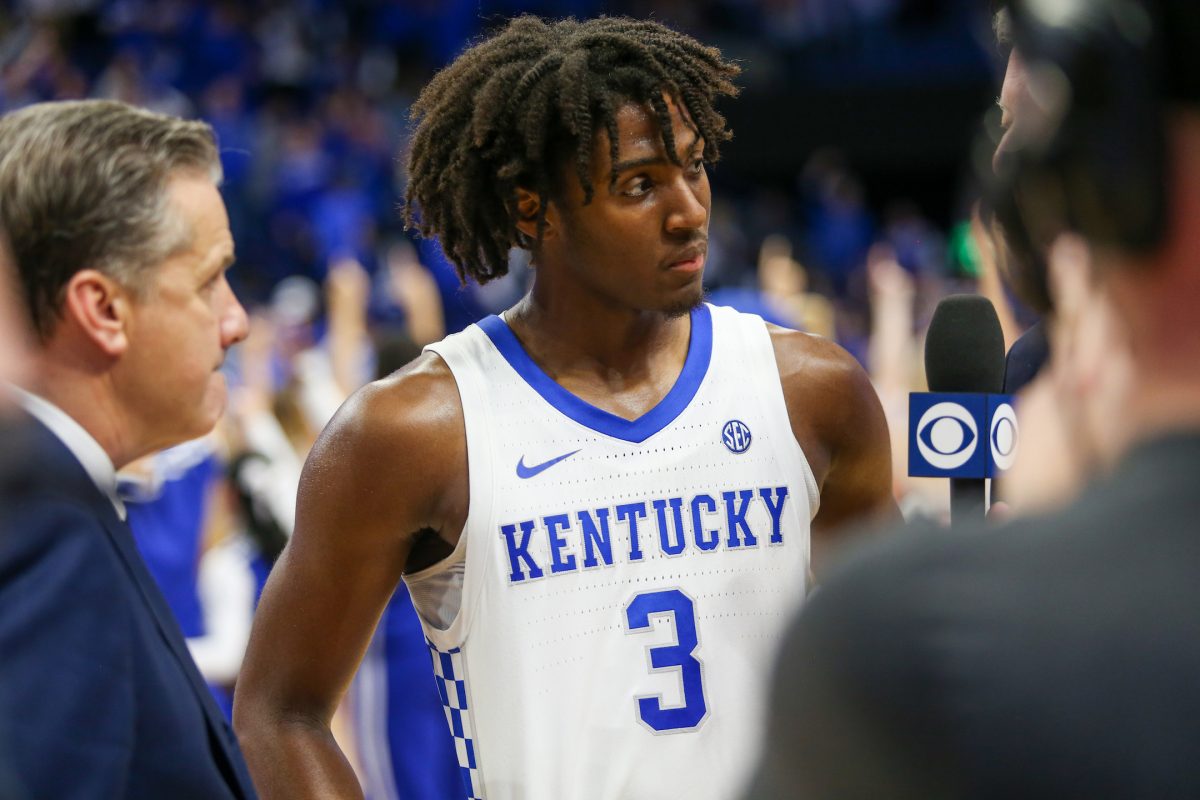 Freshman Tyrese Maxey has had to make adjustments to his game at Kentucky under coach John Calipari but his father says that only makes him a better player. (John Crisologo Photo)

Until this season, whenever Tyrese Maxey played a game, his father was always there. However, Tyrone Maxey didn’t get to see his son play in person at Kentucky this year until the Cats beat Louisville in overtime Dec. 28 in Rupp Arena.

“Not to be there has been really different,” Tyrone Maxey, a former high school and college assistant coach, said. “All he had ever known was me being there. It was tough just watching on TV. I was giving him feedback after every game.”

Denyse Maxey, the UK freshman’s mother, has been at a majority of UK games but some health issues kept Tyrone away until Louisville.

“He (Tyrese) might jokingly say he could hear me scream but I don’t do that,” Tyrone Maxey said. “I will make a majority of the home games from now on. Away games, maybe a couple like Georgia and definitelyTexas Tech.

“I’ve got to be there obviously for the NCAA Tournament, SEC Tournament. I am fully back at it. God is good.”

He thinks his son’s overall play has been “pretty good” but he says he was “accustomed” to games like the 26 points against Michigan State to open the season and 27 against Louisville when he made four 3-pointers thanks in part to a shooting tip from his father that helped snapped a 2-for-20 skid from 3-point range.

“It has been an adjustment playing off the ball. He is used to being on the ball and he has kind of struggled getting used to that,” Tyrone Maxey said. “He can play off the ball or on it but he’s never been off the ball this much. He’s always been a point guard.

“I played him about 70 percent on and 30 percent off with us, but doing this will bode well for him at the next level. It’s part of the positionless basketball with Cal and he’s adjusted. Bottom line, he just wants to win. I think you get the best of him on the ball but it’s working well for Kentucky.”

Some have questioned Tyrese Maxey’s defensive ability. However, he’s always been known as a solid defender and Tyrone Maxey thinks he’s done well this year.

“I think he is a hell of a defender. He pays attention to details. In a full game he may make five mistakes but you can depend on him to try and prevent a guy from catching the ball, keep a guy in front of him. He competes defensively,” the UK freshman’s father said.

“He will really get after you. Some people did not really know how good a defender he is and are now seeing it on the big stage. I always told him if offense dictates what type of player you are, then you are not very good. You have got to defend as well. I am really impressed with his defensive effort.”

Same with rebounding where Maxey is not only willing to battle, but shown he can take a defensive rebound and start a fast break immediately.

“That is a high priority for him to rebound. I have been coaching him since he was in second grade. We lost a state AAU final when we gave up an offensive rebound to lose the game. I have been pounding that in his head over and over ever since then. I have always told him his stock will rise if he rebounds the ball,” Tyrone Maxey said.

One reason Maxey’s parents were happy with his college choice was because they knew he would be pushed by Calipari and his staff — and that’s exactly what has happened.

“I thought he would be okay. He is fine with high stakes and then getting on him a lot. They (UK coaches) really get after him now,” Tyrone Maxey said. “He is doing well with it. I am proud of him. He is a good kid. I appreciate what they are doing for him. It is going to make him better. He knows that.

“He is having a ball at Kentucky. He always wanted to be here and experiencing it has just made it even better. He enjoys the campus. He is living the dream and we couldn’t be happier for him.”

Remember how Mississippi State coach Ben Howland upset UK fans before the 2018-19 season when he said Tennessee, not UK, should be the SEC favorite.

Going into conference play this year, Howland was all blue.

“I think Kentucky — as it was going into the season — is the team to beat,”  Howland said on the SEC coaches teleconference before the Cats beat Georgia 71-59 to start conference play.

However, he followed that by saying the race was “wide open with no bad teams” in the league.

That’s the same feeling Auburn coach Bruce Pearl, who took his team to the Final Four last year, had.

“There is no bottom to the league. I think there are a couple, two or three teams ahead of everyone else from an experience and talent standpoint,” Pearl said.  “But there are not those wins anybody in league can look at and say that’s a win. That makes for a very difficult league to coach in and win in.”

Kentucky coach John Calipari — like he has done in recent years — touted the league’s balance before SEC play started.

“There’s no one that will walk into Rupp Arena and we will say, ‘Alright, we can get this one.’ There’s not one team in this league,” Calipari said. “Again, I’ve been in this league a long time and I’ve said early on when we were getting three teams in (the NCAA Tournament), this is going to be a six-, seven-, eight-bid league.

“I 100 percent anticipate he’ll be ready to go,” Stoops said before UK played in the Belk Bowl last week.”

However, Stoops also said that was his opinion and not based yet on anything medical personnel had told him. Wilson was UK’s starter in 2018 when the Cats went 10-3 and threw for 1,889 yards and ran for 547 yards. He tore a patellar tendon in his left knee in week two this season.

Wilson will miss spring practice but was on the field throwing in Charlotte during pregame workouts at the Belk Bowl with his UK teammates.

“He looks good. He’s got to continue to build that quad. That’s the big thing with that type of injury because you have a tendency to get some atrophy from letting that heal for so long,” Stoops said.  “He’s got to get some weight back on, in general, but we had a talk before we left for the bowl, before we had the little Christmas break, and he knows that.

“He’s able to attack the weight room now. He was getting big, and he needs to be. Not in a bad way, but a good way.” 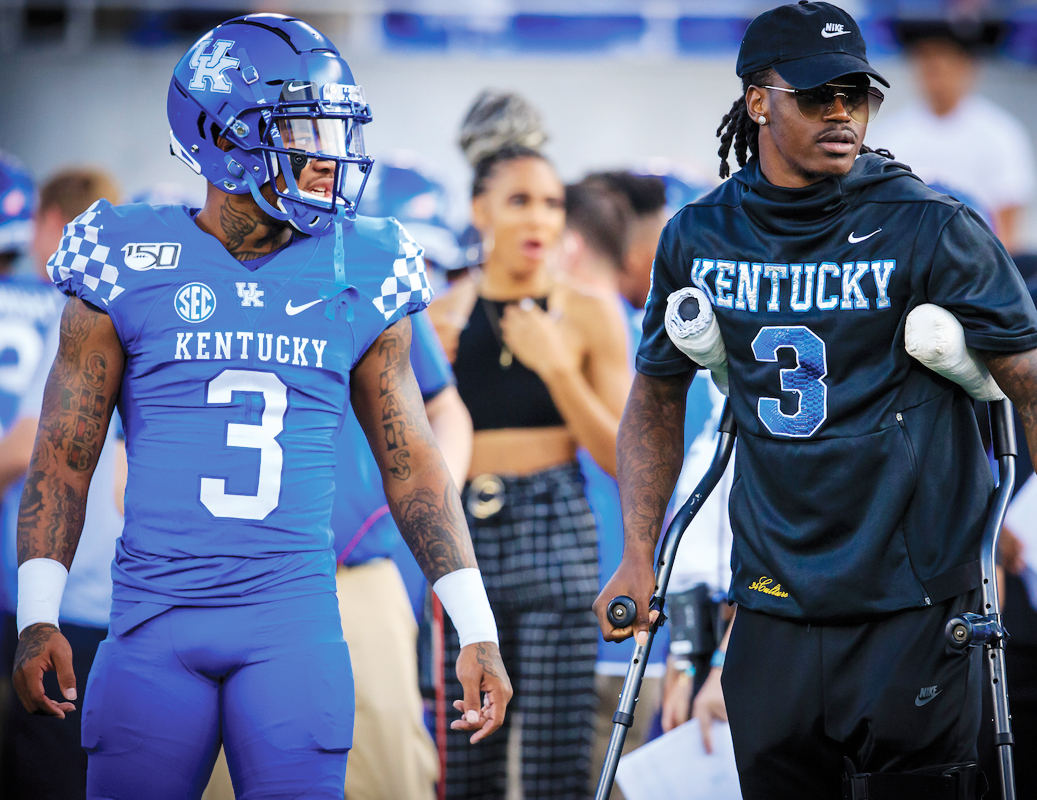 Mark Stoops expects quarterback Terry Wilson, who missed all but two games with a knee injury this season, to be healthy enough to play when UK opens the 2020 season. (Jeff Houchin Photo)

After Nick Richards’ career-best performance against Louisville when he had 13 points and 10 rebounds in the overtime win, fans were full of love for the UK junior center. So were the UK coaches.

“We were high-fiving and hugging him is what we were doing. He’s such a beautiful kid. You want him to babysit your kids. He’s that kind of kid,” Barbee said. “Everybody on campus loves him.

“But in this game you’ve got to have an alter ego. When you step on the court you can be whatever you want out on that floor, but it can’t be a nice guy. He decided not to be so nice (against Louisville).”

“It’s been a confidence deal. It’s why he’s more reserved on the court, doesn’t want to step out, to put himself out there because now you’re accountable to do that every day,” Barbee said. “If we can get that Nick — and it wasn’t us throwing the ball to him every possession.

That is exactly what Kentucky got against Georgia, too, as Richards had 17 points in the first half and finished with 21 points, 12 rebounds and four blocked shots. He’s now had six double-doubles in 13 games this year after having one in his first 74 games.

“He was a physical player and he had a few jump shots he hit early that I think helped his confidence. Got to give him credit,” Missouri center Reed Nikko said. “We respect him as a player. Our game plan was that we just had to keep him out of the paint. Obviously, he was hitting jump shots that we weren’t ready for.” 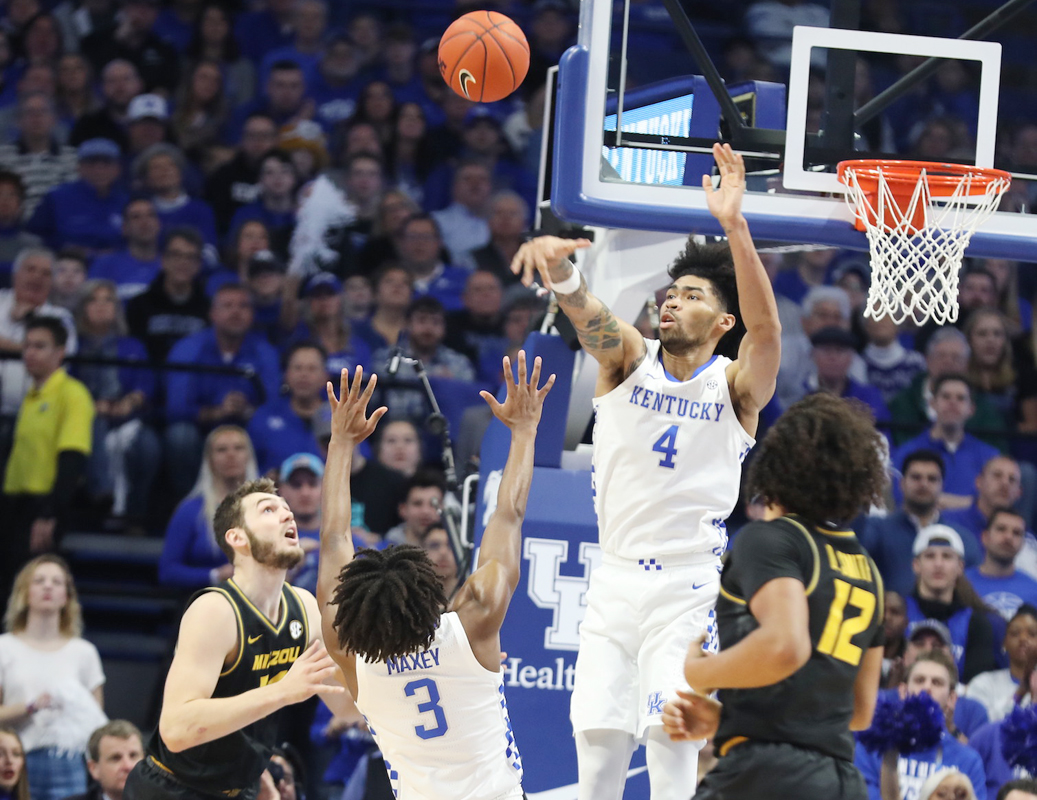 Kentucky coaches want Nick Richards to have an “alter ego” on the court and he did exactly that with his play against Louisville and Missouri. (Vicky Graff Photo)

If you need a few more reasons to appreciate just how memorable Kentucky’s 37-30 comeback victory over Virginia Tech was in last week’s Belk Bowl, here you go thanks to Corey Price of UK Athletics:

— It was only the third time UK scored a touchdown in the final 15 seconds of regulation play to win (Missouri, 2018, and Vanderbilt, 1971, were the other two).

— Kentucky set a school record for most points scored in a bowl game  (previous record was 35 in the 2007 Music City Bowl). The Cats scored 37 or more points in their final four games — the first time UK has done that in four straight games since 2007.

—  Kentucky gave up 329 yards of total offense to Virginia Tech, the eighth straight game an opponent gained less than 330 yards against UK. That’s the best streak since the 1977 team held all 11 opponents under 329 yards.

“For us to lose all the guys to the (NFL) draft that we did and then lose our quarterback and still go 8-5 says a lot about the talent on this team,” recruiting coordinator Vince Marrow. “Our defense was supposed to be down but this whole team just came together.

“We got credit for finding some kids nobody else recruited them and developing them. But you still have to have Jimmys and Joes. We have a lot of four star players and high three star guys and now we are getting some five stars that we did not have before. The more highly rated guys you get, the better you are going to be. So when people say we don’t have talent, they are just wrong.”

Quote of the Week: “When you think of Kentucky, you don’t just think of the basketball team, you think of the fans and Big Blue Nation as a whole. When you face adversity, they feel it, too. They’re not the ones playing or practicing but they live and breathe for this stuff. So, if we’re not playing well, they kind of feel like they’re not playing well, whether they’re playing or not,” Kentucky grad transfer Nate Sestina on UK basketball fans’ passion for the Cats.

Quote of the Week 2: “I never even told him but I always prayed for him every night. When I woke up every morning, I prayed for him. I just really wanted to see him make it through it.  Everybody loves him. That’s my brother and I love him too,” UK defensive tackle Calvin Taylor on teammate Josh Paschal, who was diagnosed with cancer before the 2018 season but came back to play this year.

Quote of the Week 3: “Recruits when they come here now, when they think of Kentucky football, they think of winning, The past four years we’ve gone to a bowl game. They’re rolling out the red carpet for these guys now,” Kentucky linebacker Kash Daniel on how the UK recruiting mentality has changed.