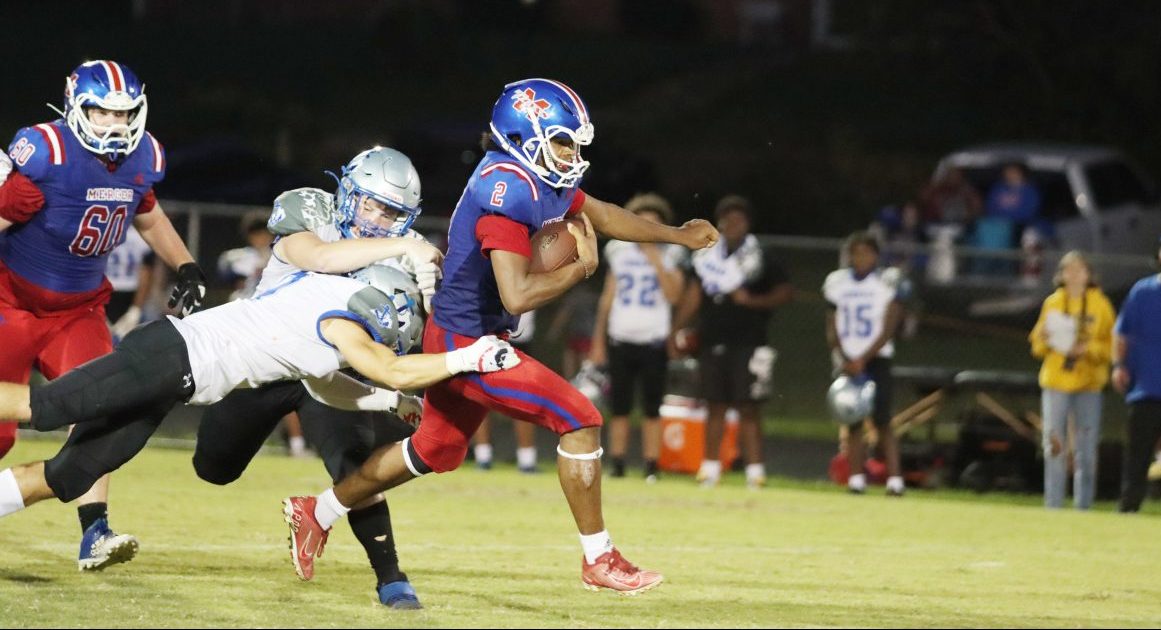 The Harrodsburg Herald/Wesley Bird
Senior running back Morgan Pennington broke loose for a big gain in Mercer’s 17-14 win over the Admirals on Friday, Sept. 9.

The Mercer County Titans football (2-2) ground out an ugly win, 17-14, over the Danville Admirals (2-2) Friday, Sept. 9. The two teams and coaching staffs combined for 19 penalties which would sway the game in Mercer’s favor in the end with senior Gavin Wilson making a 32 yard game winning field goal. Neither team nor the refs had their best outing with questionable calls, bad tackling and dropped passes.

Danville started the game with the ball on their 20 yard line after a Wilson touchback.  They turned the ball over two plays later with Thaddeus Mays undercutting a route and coming away with an interception. The Titans moved the ball well on their first possession with Mays completing passes to Denim Griffieth and Jackson Perry. Mercer was first on the scoreboard when Mays ran in an eight yard touchdown and Jase Cocanougher adding the extra point, 7-0.

Danville’s second drive was better, but had similar results as their first. Sophomore Demauriah Brown had gains of 20 and 9 yards on runs for Danville. The Admirals turned the ball over on Mercer’s 33 yard line with Brown fumbling and senior Tytus Weldon recovering the ball for the Titans.

Mays showed who was the best athlete on the field with a 47 yard scramble to put Mercer in the redzone. The Titans converted a third down and 10 with tightend Landon Yates having a good catch and run. It took four tries, but the Titans found pay dirt with Mays scoring again on a four yard rush, 14-0.

Danville was called for holding and went three and out with a short punt to give Mercer the ball back on the  Admirals 40 yard line.  The Titans had two incompletions and a penalty to force their own punt.

Danville started on Mercer’s 10 yard line after the Cocanougher punt. Danville faced a fourth and inches situation on their own 44 yard line and broke a 56 yard touchdown run to make it a one score game, 7-14. Mays continued his success running the ball with a 20 yard gain even after a Titans penalty. Senior Morgan Pennington found a lane and picked up 16 yards for Mercer. The Titans had two false starts on the next set of downs killing the drive and giving the ball back to the Ads.

The Titans defense held with senior Andrew Sheperson making a big play in the back field and Mays knocking down a pass in coverage. The Titans had good field position with a return for Mays and a Danville penalty. Mercer turned the ball over on the Ads 36 yard line with an interception off a tipped ball.