Titans drop one, win one in district 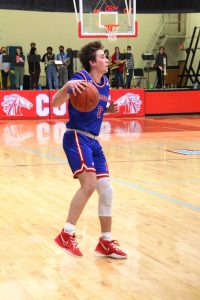 The Titans abandoned their slower paced offense against West and played aggressive at both ends of the court, scoring off forced turnovers. Senior Sam Baughman lead in scoring with 17 points. Evan Hart and Trevor Ellis both had double doubles, with 10 points and 10 rebounds and 13 points and 13 rebounds respectively.

Baughman opened with five quick points with a strong drive and 3-point shot, followed by a drive from junior Seth Caton and the Titans trailed by one, 7-8. Ellis sank two foul shots to end a six point run by West, 9-14. With 8.4 seconds left in the first quarter, Hart hit a hard fought shot at the post and closed out the first with the Titans down 14-11.

Ellis and Hart continued to work the inside. Ellis had a strong put back on an out of bounds play to draw the score to within one, 14-13. Hart kept pushing to add two more, 15-16. Ellis drew the foul and  hit one from the free throw line to take the lead for the Titans, 18-15.  The Colts tied the game back up, but Ellis hit one under the basket to take the lead back. Baughman busted a 3-point shot to extend the lead to 5, 23-18. Mercer slowed down their pace and West took advantage and the game was tied, 24-24, at the half.

West forced the turnover and earned the and one shot and went ahead 27-24.  Mercer’s defense never let up, but Jessamine would find a way to the basket. The game was very physical and Ellis took a hard spill when the West defender took his legs out from under him while blocking out.  Sophomore Donavan Wright hit a big 3-point shot to cut West’s lead. The next play he snagged a big rebound to go the length of the floor to Hart to Ellis to tie the game, 35-35 with under a minute left in the third. West senior Hogan Price sank a three with only a second left in the third to give them the five point lead, 40-35.