The Mercer County Titans girls soccer team’s (4-12-3) season came to an end in the first round of the 46th district tournament with a 2-4 loss to the East Jessamine Jaguars (8-9-1) Tuesday, Oct. 4. 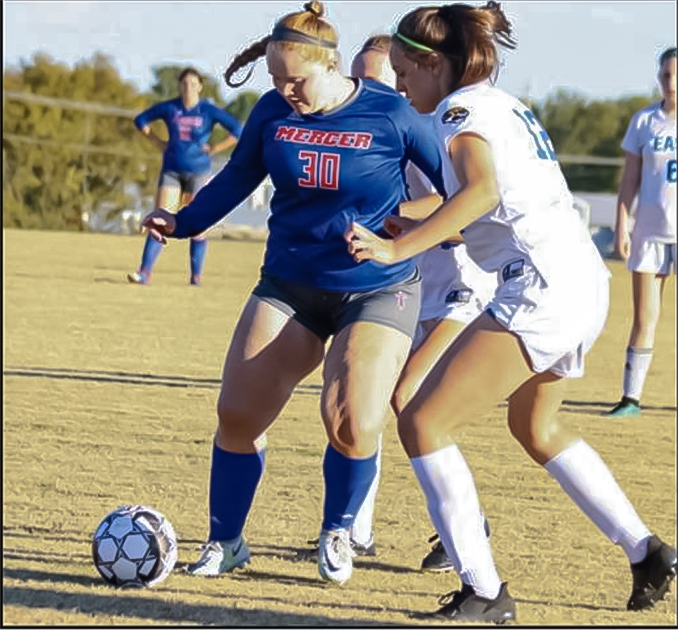 The Harrodsburg Herald/Wesley Bird
Lillie Travillian battles for possession against an East Jessamine defender in Mercer’s loss Tuesday night in the first round of district tournament play.

Mercer showed a lot of fight and led in the first half, but couldn’t close out the Jags down the stretch. Sophomore  Laykin Irvin was the lone scorer for the Titans with a goal in each half.

East Jessamine started aggressive with a opening shot that nailed the cross bar and junior Blaize Sims stopped another run at the goal (1′, 2′) Titans keeper Ryleigh Sipe scooped a loose ball in the box as Jaguars continued to pressure the Titans back line (12′). East Jessamine had several corners into the box, but Mercer stopped them all until Olivia Rogers finally pushed it up field (17′).

Mercer’s first shot of the game came from Irvin who put one over the East Jessamine goal (23′). Sipe made a diving effort to block  shot from the Jaguars, but the ball was still in front of the empty net until an East Jessamine attacker sailed it over the goal (25′). Senior Lillie Travillian served a perfect ball out in front of Irvin who out ran the East Jessamine back line and buried a shot past the keeper to give Mercer the lead (29′), 1-0.

Sims stopped another run from the Jaguars which turned into freshman Baylee Sims getting a shot on goal on the other end (35′). The first period ended with Mercer’s back line keeping the net clear to go into halftime with the lead.