An Owensboro man has been indicted on six counts of wanton endangerment after police say he caused a three-car collision while driving impaired.

On Aug. 6, 2022, Patrolman Zakkary West of the Harrodsburg Police Department observed a possible collision involving three vehicles at South College Street and Elizabeth Court. According to the uniform citation, West found the driver of one of the vehicles—subsequently identified as Nathan Blandford, 33, of 617 Jeff Place, Owensboro—lying prone on his back next to his vehicle, a white 2019 Buick Lacrosse. When West approached him, Blandford placed his hands behind his back unprovoked, according to the citation. 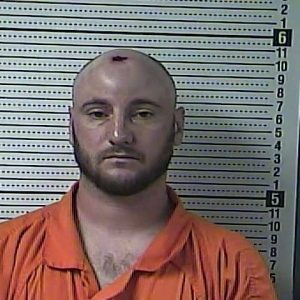 West detected “the odor or alcohol” and noticed Blandford’s speech was slurred and his eyes appeared bloodshot and glassy. While Blandford refused to answer questions, West determined Blandford had collided with another vehicle carrying five occupants. One occupant complained of back and neck pains and was transported to Ephraim McDowell James B. Haggin Hospital, according to the citation. A resulting secondary collision occurred involving a third vehicle with one occupant.

Witnesses described Blandford’s driving as “reckless” and said he attempted pass other vehicles at a high rate of speed and attempted to use the median lane as a passing lane, which resulted in the accident, according to the citation.

Last week, the Mercer County Grand Jury found there was enough evidence to prosecute Blandford on six class D felony counts of 1st degree wanton endangerment, one for each person involved in the accident, including three minor children.

Blandford is also charged with driving under the influence, a class A misdemeanor, and driving without insurance, a class B misdemeanor. Bail was set at $15,000 with the condition that Blandford is not to operate a motor vehicle. Patrolman West testified at last Thursday’s meeting of the Mercer Grand Jury, who handed up indictments on charges including burglary, DUI and drugs.