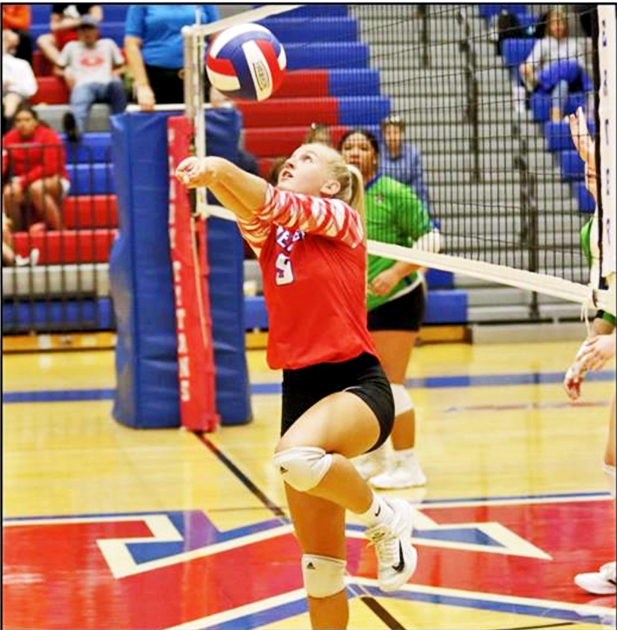 The Harrodsburg Herald/Wesley Bird
Senior setter Taylor Murphy set up the Titans for the spike in Mercer’s comeback win over East Jessamine on Thursday, Sept. 22.

The Titans volleyball team won on the road against East Jessamine earlier this season, something the Jaguars were not expecting. East traveled to Mercer’s gym Thursday, Sept. 22, with a chip on their shoulder, but the Titans had no intention of losing on their home floor. With two starters out due to injury, the Titans went a full five sets, but pulled off the victory, 21-25, 13-25, 25-21, 25-20 and 15-13.

Jamesyn White and Ralasia Piazza were both out of rotation due to injury for Mercer and the team struggled the first two matches to compensate for their absence.

The first match started with a kill by senior Jai Piazza and freshman Teigh Yeast strong at the service line. East was playing sloppy and Mercer jumped out 6-3. After a time out, East cleaned up their play and started to make their way back in the game. Mercer would push their lead by three points and then East would answer back.

Junior Jorga Sanford was on the net more in White’s absence and did a good job hitting and blocking. Setter Taylor Murphy helped J. Piazza block as well to keep the Titans lead, 16-13. They continued back and forth until East Jessamine’s Audrey Fraddosio crushed the ball.

It was the rally that East needed and after Mercer miscommunicated a few times, the Jaguars went on to take the set, 25-21.