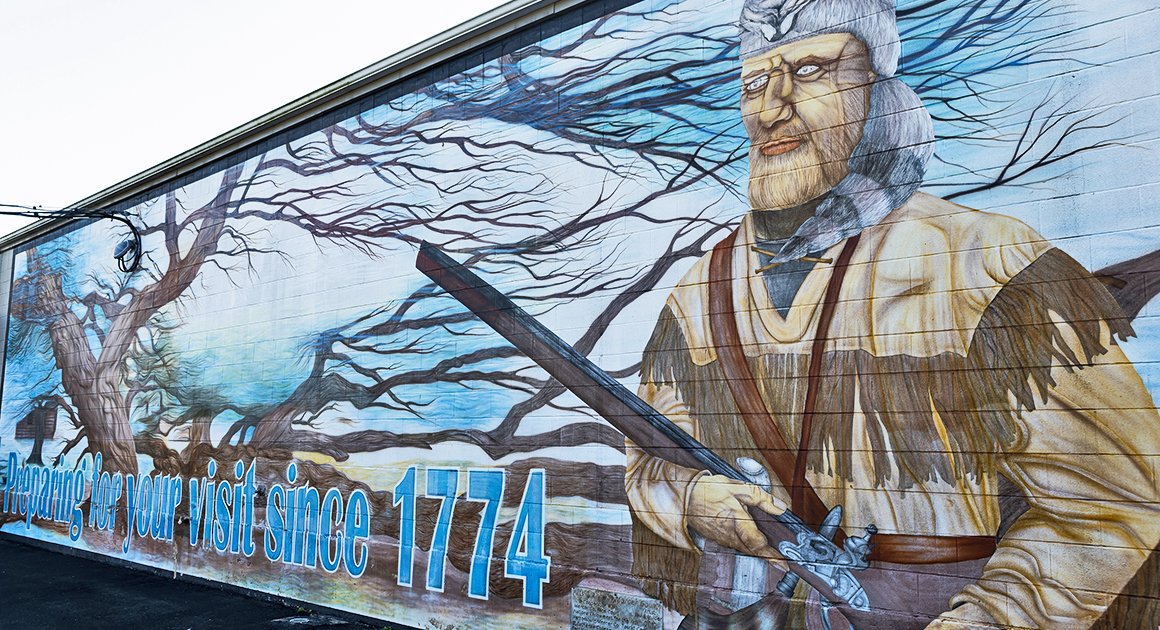 The Harrodsburg Herald/Robert Moore
The Harrodsburg-Mercer County Tourist Commission voted last week to pay up to $20,000 over the next two years to replace the mural at the Mercer County Fiscal Court that faces College Street. While the color is fading, the mural has been a lightning rod for criticism since it was first painted.

One of Harrodsburg’s most eye-catching–and controversial-–landmarks may be getting a face lift just in time for Harrodsburg’s 250th anniversary in 2024.

Last week, the Harrodsburg-Mercer County Tourist Commission approved paying up to $20,000 over two years to paint a new mural on the back of the Mercer County Fiscal Court, which faces College Street.

Toni Preston of the 250th Anniversary Committee said the current mural, which depicts Harrodsburg’s founder, James Harrod and the Osage orange tree, is fading and chipped.

David Coleman, the manager at Old Fort Harrod State Park–which sits across the intersection from the mural–and a board member for the tourist commission, agreed.

“It needs to be replaced,”  Coleman said.

Ever since the mural was painted in 2012 by Harrodsburg graphic designer Paul Mulder, it has been a lightning rod for criticism across the community, with several local organizations discussing- replacing it. While some of the complaints stem from the mural not being shielded, many have objected to the portrait of James Harrod as being “scary.”

Harrod’s appearance, along with his disappearance in 1792, is a source of mystery. The two-sided metal sign depicting James Harrod that replaced Pioneer Man at the entrance to Old Fort Harrod several years ago is based on one description among several. The version of James Harrod in the mural is based on a commemorative coin, which Mulder showed the Harrodsburg Herald back in 2012. It should be noted  that Mulder faithfully executed a design which was approved by the tourist commission, the fiscal court and the National Endowment for the Arts, among others.

Last Wednesday, Preston presented board member with an initial design by artist Damon Farmer, which Preston said showed off Harrodsburg’s pioneer and Victorian history. The \design also includes room on the side for signage. Preston said the sketch a “cartoon.” She said a realistic sketch of the mural would cost $200.

Once finished, the mural could last up to 25 years or even longer, with  regular applications of sealer.

“I’m frankly not in love with what’s there now,” said Chairman Tim Kazimer. “I kind of like the idea and the direction.”

He said splitting the money into two budget cycles made it a little more palatable.

The mural will be separate from what the tourist have already earmarked for the 250th anniversary, which happens in 2024.

“We need to be a little cognizant of the bigger picture,” Kazimer said. “It’s going to be an expensive undertaking.”

He said they would probably be coming to the tourist commission for future projects and asked Preston if they had looked for private sponsorships.

“We don’t want their name on it,” Preston said. “We just want it to be a pretty painting, not an advertisement.”

This isn’t the only project the mural committee is involved in. They are currently working on painting mini murals on the picnic tables at Young’s Park. The committee would like to have two murals up within 18 months.

Board member Tiffany Yeast asked about Farmer’s contract, including reproduction rights for print.

Preston said the mural committee are checking to see if there are any legal issues, including if there is a contractual minimum amount of time the current mural needs to stay up.

Yeast also asked if there was any flexibility on the design. Preston said the tourist commission, the fiscal court and the mural committee will have final approval.

“If we want him to do this next summer, we need to get on it,” said Coleman, moved to have the money taken from two budget cycles.

Preston said they have to go before the fiscal court to get the magistrates’ permission.

In other news, Coleman told the board the state is finally moving forward with replacing logs at fort. Old Fort Harrod will be closed Nov. 1 and remain shut down most of the winter.

“I’m happy to hear that,” Kazimer said. “That’s been on our books for a long time.”