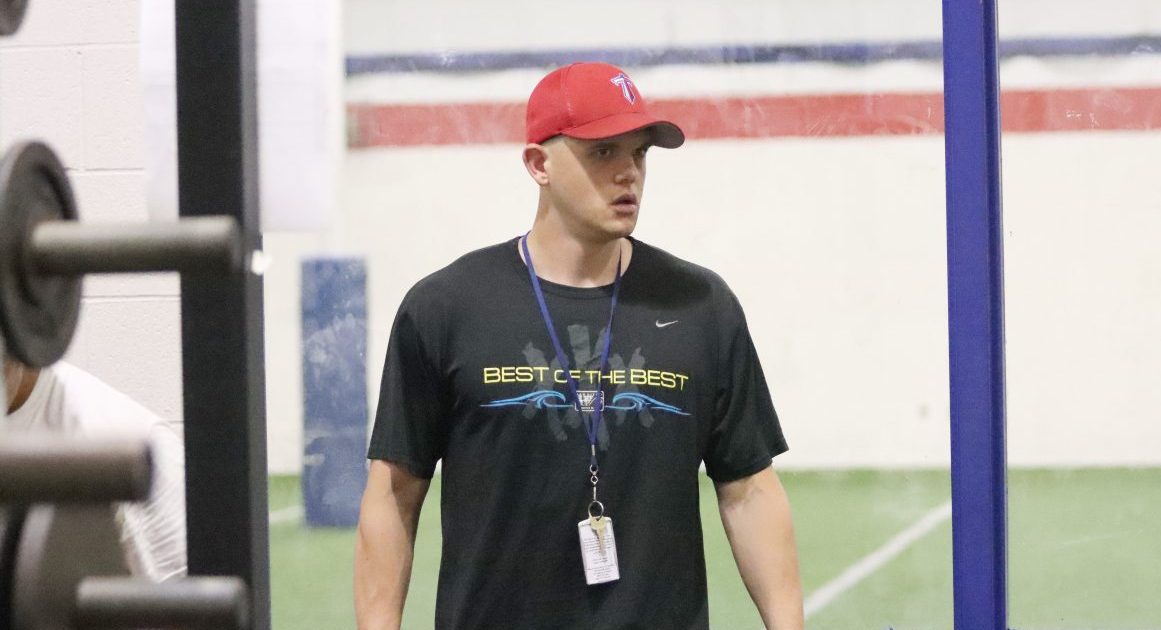 The Harrodsburg Herald/Wesley Bird
Strength and conditioning coach Jeremy Carlson hopes to build a new culture in the weight room for Titan athletes from all sports. The weight lifting program has increased from 60 to 160 kids in one semester, but Carlson’s only getting started.

Mercer’s athletic program  has had one of the best training facilities in the state since the 2006 merger of Harrodsburg and Mercer. The Mercer County Sports Complex looks a little different these days with new weight benches, new dumbbells and a much needed new coat of paint. The biggest difference is the man in charge and his impact across the school.

Jeremy Carlson has been with the Titans for one year as both the strength and conditioning coach for the vast majority of all the Mercer athletic teams and the head coach of the boys soccer team. He’s brought stability and new life to the Titans program.

Originally from Seattle, Washington, Carlson moved to Kentucky to play soccer for the Centre College Colonels. He chose Centre because he wanted to be a college soccer coach and he knew he wanted to move to a small town. After four seasons with the Colonels, including an Academic All-American nod his senior year, Carlson graduated with a degree in history and a minor in sociology.

His love for strength and conditioning came from a lack of it during his time at Centre. With no weight-lifting program offered for their athletes at the time, Carlson took it on himself to train and hold his teammates accountable in the offseason.

After college he joined the Centre men’s soccer team as a volunteer assistant coach with hopes of being a head coach one day. During this time he became a Certified Strength Conditioning Specialist (CSCS) with the National Strength and Conditioning Association (NSCA).

In 2017, Carlson became the strength and conditioning coach for Centre College. “One of my big missions is to help those who are less fortunate than me and not so much from an economic standpoint, but more from I didn’t have a strength and condition coach, in high school or college,” said Carlson.

He spent four years training 24 different college teams  and was the director of the Buck Fitness Center. He also completed his masters in exercise science. Carlson found himself at an NSCA conference for high school strength and conditioning coaches and fell in love with it. After spending a year as the Boyle boys soccer head coach it only reinforced his desire to work with high school age kids.

“I loved it, I didn’t know how much I would enjoy working with that age group because the kids at the high school level are still impressionable enough to make a lasting impact,” said Carlson.

He joined the Mercer staff in 2021 and he’s already made his mark on the program updating and adding some equipment at the complex. He’s also made an effort to fix and upkeep the current equipment from his experience of running the Centre gym.