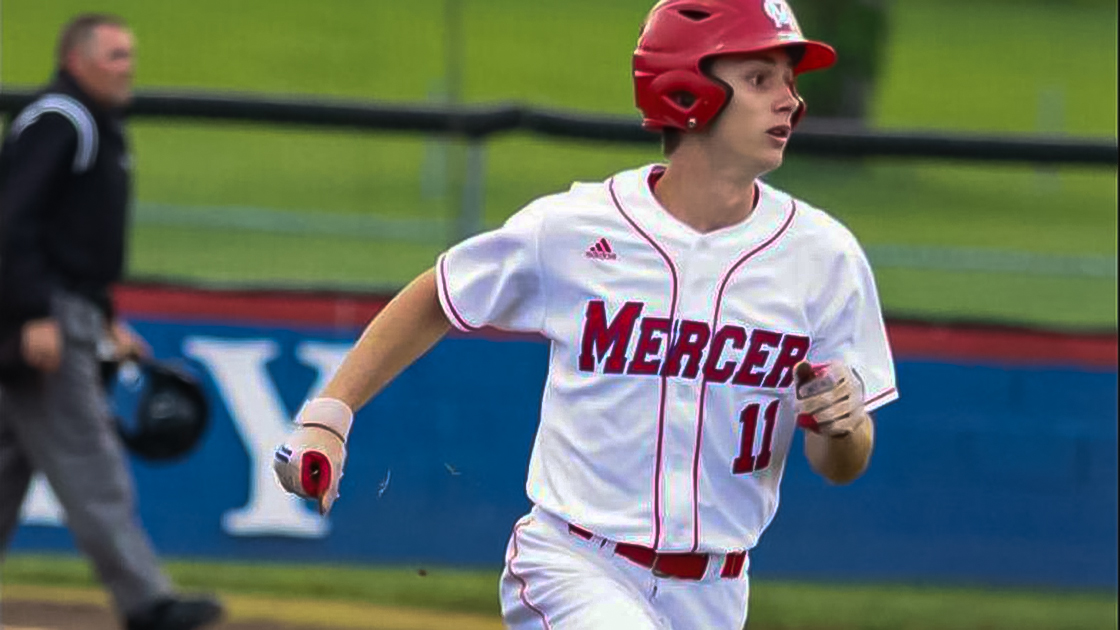 The Harrodsburg Herald/Wesley Bird
Senior Cayden Devine sprints to first during the Titans’ first round loss to Danville in the 12th Region championship. Devine scored Mercer’s only run and pitched four innings, striking out six.

The Mercer County Titans Baseball team’s great season (26-10-1) came to a close in the first round of 12th region play with a 1-6 loss to the Danville Admirals (28-8) Monday, May 23. Mercer’s hitters couldn’t find their swing with 13 strikeouts, on the evening. Cayden Devine and Evan Hart split time on the mound giving up nine hits, six runs and striking out 11 batters together.

Devine started on the mound in the top of the first inning and the Titans picked up two outs with a strikeout and Isaac Beasley catching a foul ball. Danville had one on first base when Brady Baxter hit a two run homerun to give the Ads the lead, 0-2. Devine and Caleb Purdom each had hits to center field for Mercer. Hart with a line drive scored home Devine for the Titans only run, 1-2.

Danville added in another run with a ground ball and a sacrifice fly before Devine got the final strikeout, 1-3.  Mercer went three up and three down with Aaron Caton, Heath Shewmaker and Jonathon Logdon all getting out.

In the top of the third inning, Shewmaker caught a pop fly, Sam Baughman fielded a ground out and Devine registered a strikeout. The Titans batters all struck out in the bottom of the third.

Devine had all three outs in the top of the fourth inning with a strikeout, he fielded a ground out and gathered a bunt to beat the runner to first base. Mercer again had three strikeouts from their batters in the bottom of the fourth.

Danville scored their final three runs in the top of the fifth inning starting with a homerun before Hart took the mound for Mercer, 1-4. Hits to left and center field scored home two more runs for the Ads to end the scoring for the evening, 1-6. The Titans couldn’t respond with Caton grounding out, Riley Peavler and Logdon both striking out in the bottom of the fifth inning.

Only Baughman touched first base off a hit by pitch in the sixth inning with Hart striking out three Admirals and three Titan batters facing the same fate. In the seventh inning, Hart struck two out and caught another stealing base. Mercer ended the game with Hart popping out, Beasley flying out and Matthew Brodeur striking out.

The Admirals move on to play Wayne County and West Jessamine pulled off the upset to beat Boyle County, 3-2, and face Somerset in round two.