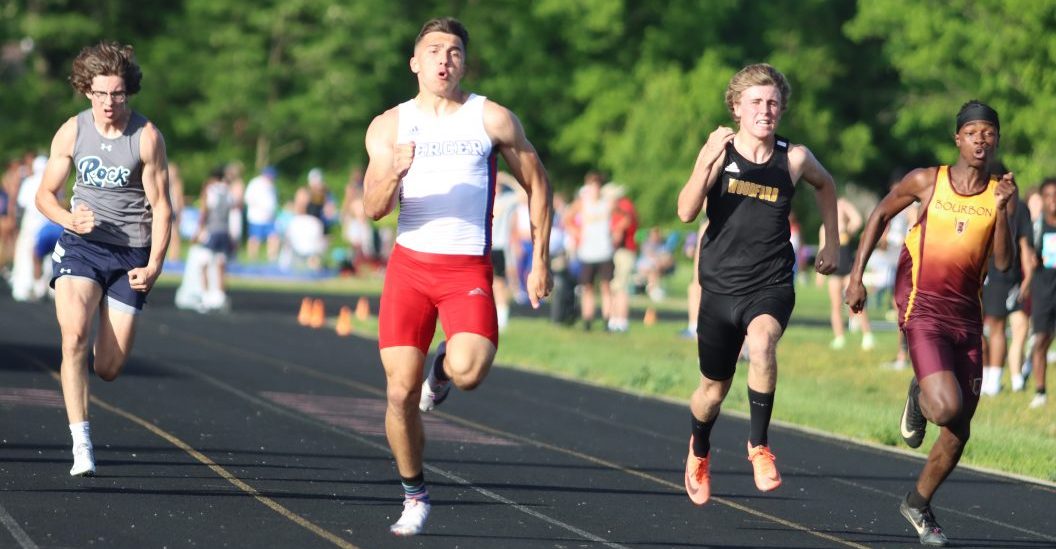 The Harrodsburg Herald/Wesley Bird
Junior Beau Brown broke a school record for the 100 meter dash with a time of 10:92, earning first place at the CKC Championship track meet on Friday, May 13.

The CKC Championship track meet returned to Alvis Johnson Field Friday, May 13. Sixteen teams were present for the meet with the Mercer Titans boys track team taking gold with 124 points. The West Jessamine Colts placed first on the girls side with Mercer coming in fourth and Burgin placing thirteenth.

The boys team win came from big performances across the board. Beau Brown broke the 11 second mark in the 100 meter dash. Lleyton Penn continued his reign over the shot put event with a throw of  52-05. Thaddeus Mays and Tytus Weldon took to the skies in pole vault with heights of 12 and nine feet.

The Titan girls team were without one of their stars with Jai Marie Piazza out with an injury. They still had a strong day with 76 points from six athletes. Junior Timberlynn Yeast swept the 100, 200, and 400 meter dash events for 30 points. Teigh Yeast finished on the podium in all three of her events with only her older sister beating her in the track events. Eighth grader Ralasia Piazza collected 10 points from high jump and triple jump.

The Burgin Bulldog track team only had two high school athletes at the meet with class night taking out the majority of the team. Eighth graders Raegan Taylor and Kate Hatfield scored all eight points for the Bulldogs. Taylor placed seventh in the 300 meter hurdles and the 100 meter hurdles for four points. Kate Hatfield had the top finish on the evening with fifth place in the long jump for four points.