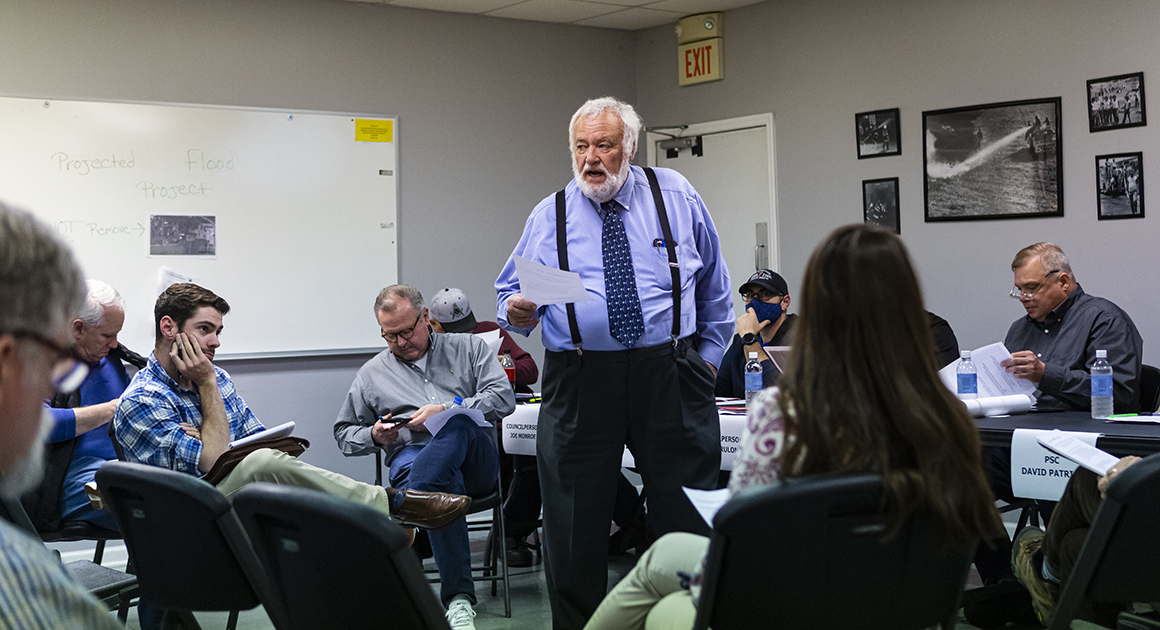 Even as Burgin moves forward with a possible solution to the city’s flooding problems, there is still uncertainty due to questions over funding and the landscape of Mercer County.

Roger Recktenwald, the grants administrator with the Kentucky Infrastructure Authority, led a meeting to discuss what Recktenwald called “a very complicated” and “a very needed project.”

Recktenwald said they were still in the process of collecting information. He said they had found studies—including multiple dye tests—dating back to 1972.

The Burgin Flood Mitigation Study, produced by the U.S. Army Corps of Engineers in 2020, came up with four different alternatives. Due to the expense involved, officials are proceeding with the second alternative, which involves boring two horizontal tunnels and pumps to control the water. Due to several factors, the Corps of Engineers could not determine that the project will totally handle the problem. Even if it works, flooding is still anticipated on the west side of the railroad tracks.

If the project gains funding, two 30 inch pipes will pass under at least three houses, which will require getting easements from the homeowners. Recktenwald said Burgin will be responsible for the maintenance of the facility once it’s finished.

Complicating everything is the karst topography on which Burgin sits. Almost everything in Mercer County is sitting on a foundation of limestone, which is water soluble and riddled with sinkholes and underground passages.

The Corps of Engineers didn’t do any geotechnical exploration of the area, and it is unknown what the proposed project could do to the existing network of underground streams, which are subject to change “without touching a drill,” Recktenwald said.

“It could be happening while we’re talking about it and not know it,” he told the audience. “Anything could happen. You could create an issue that could be costly or contrary to what the desired outcome is.”

Ora Main, the project manager with Nesbitt Engineering, discussed setting up a drill rig to drill down to at least 150 feet deep to get geotechnical information, including the rock composition and density. Main said there would be up to eight vertical drills every 100 feet or so, along the entire length of the project.

Even though the project is the least expensive alternative, it will not be cheap. It will cost more than a million dollars.

Kylie Foushee, a field representative for U.S. Congressman Brett Guthrie, has been working on finding a solution since 2018.

“Every time it rains hard, I always think about Burgin,” Foushee said. She said Guthrie’s office has applied for funding through what used to be called earmarks, which are now called community projects. While the earmark would pay for everything, Foushee called it a very uncertain source of income.

This year, Mercer County was taken from Guthrie and assigned to Congressman Andy Barr of Lexington. Foushee assured the crowd that the redistricting will not impact the application process. Foushee said Guthrie’s staff had submitted the funding request

“It’s got a pretty good likelihood of at least being considered,” Foushee said.

There are other options, including through the Federal Emergency Management Agency (FEMA) and the state.

Several residents, some of who recalled attending meetings as far back as 2015, spoke of their frustration.

“People are losing their homes,” one woman said. “We are not getting to our worship service. This project is long overdue.”

One person who lives on the western side of the railroad tracks said her family has to kayak to their home during floods.

“What if one of my kids got hurt? What if there was some emergency?” the resident said.

Caldwell said the city government is trying to fix as much of the problem as they can with the money they can get.

He said Burgin could not ask for money until March of last year. The initial proposal was for a pumping station which would have cost $2.8 million. Caldwell said they could not justify the expense for the number of houses served.

James Dunn, chairman of the board of directors for the Mercer County Sanitation District, asked about dredging the stream towards the river.

Recktenwald said they had spoken with the Kentucky Division of Water about dredging the stream, which Recktenwald called another project in and of itself.

“It’s a full blown project,” he said. “It’s bigger than this project.”

Phillip Yates, the pastor of Little Zion Baptist Church, said they have had to cancel services because of flooding. Yates asked about the timeframe for for the earmark, if it’s approved.

Melinda Wofford was concerned about the drilling. Many local residents blame the construction of Burgin’s sewer for the current flooding issues.

“There is no guarantee?” Wofford asked.

“There is no guarantee on anything,” Main said.

From the sinkhole by the old church it’s straight shot to the creek, Caldwell said.

“You don’t know what’s under the ground,” Caldwell said. “I don’t see any way we could hit that stream going the angle we’re going.”

If the earmark falls through, officials can use the information they’ve gathered to apply for funding from additional sources.

“We’re putting our eggs in every basket,” Caldwell said.

“It is Easter,” Yates joked.

“We’re moving forward,” Caldwell said. “It doesn’t look like it, but we’re getting a lot done.”