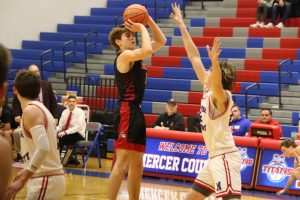 Burgin’s record isn’t indicative of their talent. The Bulldogs had to forfeit five of their games due to COVID  protocols also forcing them to miss nearly three weeks of practice during their season.

Mercer opened with two quick baskets from junior Evan Hart and Perry. Perry drained a 3-point shot and Burgin senior John Boursaw answered back with a 3-point shot of his own, 7-3 with 4:28 left to play in the first quarter.

Mercer senior Aaron Caton snagged a hard fought rebound against Burgin’s Grayson Mitchell and caught Perry coming across the lane with a bounce pass for another Titan bucket, 9-3. Senior Seth Caton followed with a shot behind the arc to extend the Titans lead, 12-3.

Qualls was fouled under his basket and hit both shots from the charity stripe.

Burgin increased their defensive pressure and slowed Mercer’s offense.  With only 1:14 left in the first quarter both teams were able to put up a couple of baskets. Mercer’s junior AJ Wearren  scored his first basket for the night and S. Caton contributed another basket. Burgin’s Qualls put up two more points followed  by a 3-point shot. The Titans led at the end of the first quarter 16-10.

Mitchell made a basket and brought the game within four points.

At the 4:58 mark senior Sam Baughman scored off a steal and scored a second time off a steal by A. Caton, forcing Burgin to call a time out, 21-12.

Mercer’s press continued to cause problems for Burgin. S. Caton scored in transition from a ball knocked loose from sophomore Donavan Wright. A. Caton added another bucket and Baughman stepped back for a long 3-point shot.

Burgin’s Mitchell continued to battle in the paint and had a strong shot block, but fouled Mercer’s Trevor Ellis, who hit both free throws, 32-12. 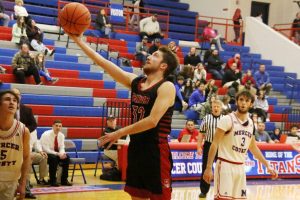 The Harrodsburg Herald/Wesley Bird
Senior John Boursaw went in for the layup in the Bulldogs loss to Mercer County Friday, Jan. 14. Boursaw was held at eight points for the game.

Qualls had a big steal and  put two on the board for Burgin.

In the opening seconds of the second half, A. Caton scored a quick bucket.

Qualls answered back by going coast to coast with a layup. Burgin’s adjustments during halftime helped them manage Mercer’s press better and Seth Hatfield was able to hit a 3-point shot, followed by a layup by Boursaw, 45-21.

Mercer played unselfish with baskets from S. Caton and Ellis with assists from A. Caton and Wright, respectively, 51-21.

Boursaw earned an assist with a bounce pass to Mitchell to end the third quarter, 51-23.

Burgin put four points on the board at the beginning of the fourth quarter with a shot from Mitchell and a put back from Jacobe Taylor.

Mercer’s Wade Lane, a junior, added a two point basket and stepped back for a long 3-point shot, 58-27.

Hatfield was able to score on a turnover. Boursaw was one for two after a hard foul. Hatfield also went one for two from the foul line and then the game went a little wild resembling a street ball game with multiple turnovers. Qualls hit a 3-point shot and it seemed refocus both teams. Hatfield and Qualls both hit layups and Boursaw was two for two from the foul line, but it wasn’t enough to narrow the gap Mercer had built. The Titans’ came out the victors, 62-40.

Mercer will be at home tonight, Thursday, Jan. 20 facing Somerset Christian with varsity tip-off at 7:30 p.m.