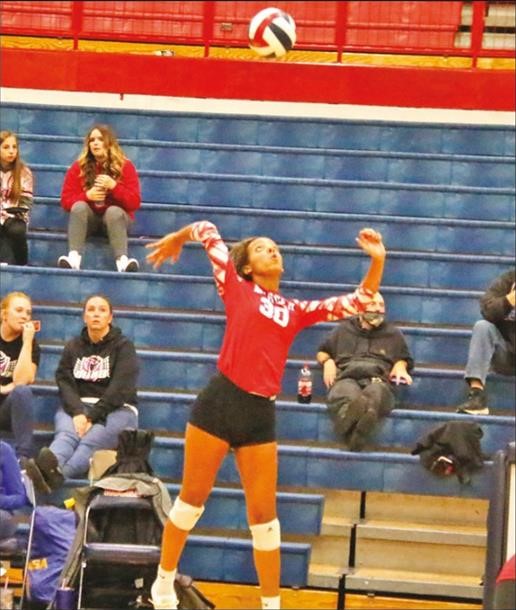 The Harrodsburg Herald/Wesley Bird
Junior Jamesyn White went for the spike in the Titans’ 12th region match against the Southwestern Warriors Monday night.

Senior Haven Six got Mercer on the board first with a nice set, 1-0, but Southwestern answered back with two straight points of their own until a service fault evened it up, 2-2. The two teams seemed evenly matched as the Warriors would earn a point on a spike and then the Titans would respond with a set by Six to Jai Piazza for a hard spike, 4-4.

Southwestern went on a three point run with hard serves to the back line of Mercer until Piazza was able to get a spike past the Southwestern front line, 8-8. Southwestern went on a five point run with the Warriors finding holes just behind Mercer’s front line, 9-13. A Warrior’s service error stopped the scoring run, 10-13, but they picked right back up with another four points as momentum started to shift their way, 10-17. Mercer fought back with a much needed point from senior Elle Prewitt and a good serve by Six, 12-17.

Southwestern continued to find holes in Mercer’s defense as they extended their lead, 12-21. Prewitt got Mercer headed in the right direction with two straight points, one at the net and the other on a serve, 14-21. Southwestern would go on to close out the first set as the Titans just seemed off their game, 16-25.

Southwestern kept the same momentum from the opening set and came out with six straight points, 0-6. After Mercer’s head coach Lynn Flach called a timeout, her team fought back with a run of their own with Southwestern making some errors at the net, 4-7. The Warriors put two quick points past Mercer’s frontline, 4-9, until a service error gave the ball to the Titans, 5-9. Mercer struggled to set the ball as Southwestern continued to pepper the back line and extended their lead, 5-13.  Some miscommunication by the Warriors and a hard fought rally ended in a three point run by Mercer, 8-14.

Taylor Murphy made a great dig to get the ball to Piazza for a point as the Warriors were prematurely celebrating, 10-15. A double hit and a bad serve from the Titans gave the Warriors two easy points,1 1-17. Junior Jamesyn White had a pretty spike to stop the Warriors scoring streak, 12-17. Mercer started to gain some ground with good play from Prewitt and Teigh Yeast, 15-17.

For the rest of the story, including the result of the district championship