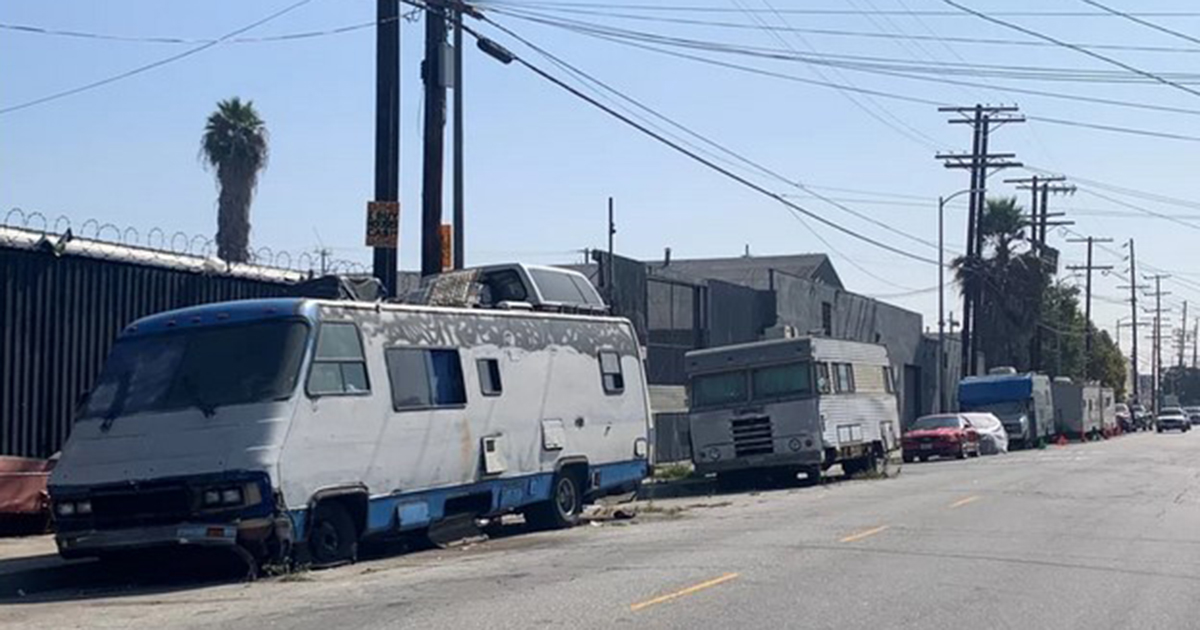 Image: Anna Scott/KCRW
While the so-called “van life” has been glamorized online and in Hollywood movies such as the Oscar-winning “Nomadland,” spiraling housing prices and rents are putting an increasing number of people on the streets, both here in Mercer County and across the world. In addition to converting storage sheds, many are resorting to illegally living in RVs, such as this scene in Los Angeles from 2019.

The Harrodsburg-Mercer County Planning and Zoning Commission is discussing possibly taking steps to curtail the use of structures which are not designed to be permanently inhabited as residential units. That includes “granny flats,”storage sheds which have been converted into dwelling spaces and illegal RV parks.

“We’ve got people living in RVs all over the county,” Shawn Moore, the executive director of planning and zoning, told the commissioners last week. Moore said there are tiny clusters of multiple RVs being used as dwellings in a couple of places in the county.

The only place an RV can be utilized in this manner is an approved RV park. Moore said he is turning over a complaint to the county attorney for prosecution.

“It’s getting out of hand,” said Moore, who said he has received anonymous letters and complaints. “They’re not going away, they’re just popping up in other places.”

“They’re really classified as additional dwelling units,” Moore said. “We need some kind of policy or procedure because I don’t know what to do.”

The issue is not contained to Mercer County. Soaring property prices and rents have led to a worldwide housing crisis. In the U.S., the typical home price is up 13.2 percent compared to last year, according to Zillow, while the national median rent has increased by 11.4 percent so far in 2021, according to Apartment List. Meanwhile, the nation’s homeless population has grown every year over the last four years, according to the Department of Housing and Urban Development, which recorded a two-percent increase in homelessness in 2020.

The lack of affordable housing options is leading many people to consider alternatives, such as permanently living in their vehicles or converting storage sheds into permanent housing, which in Kentucky have come to be known as granny flats.

In September, the Lexington-Fayette Urban County Council moved closer to approving an ordinance that would allow granny flats. According to Kentucky.com the council has been debating the issue for three years.

“But it needs to be done the right way,” Moore said.

Within Harrodsburg city limits, there are already certain restrictions in place, said Moore, who said it is a bigger issue in the county.

After researching how other localities are handling the issue, Moore is proposing a text amendment that would properly define additional dwelling units and require them to be permanently attached to the ground. The proposed text amendment would also prevent additional dwelling units from being sold independently of the property to which they are attached or to be used as a rental property or Air BNB. The units would be limited to one per residence.

The commission took no action. Bobby Upchurch, the chair of the planning and zoning commission, said he wanted to finish the comprehensive plan before proceeding with the mandatory public hearings for the proposed text amendment as well as a proposed solar farm ordinance.