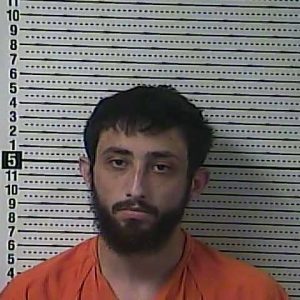 A local man has been arrested on charges including strangulation and domestic violence.

Jeffrey Cole Carmickle, 23, of Harrodsburg, is being charged after an incident that is alleged to have happened on Tuesday, Aug. 31.

According to the complaint, officers from the Harrodsburg Police Department received a call about a possible crime that occurred on North Main Street. Officers met the victim on the front porch, and noted she was bleeding from the nose and neck.

Transported to Ephraim McDowell James B. Haggin Memorial Hospital for treatment, the victim told police she and Carmickle had gotten into an argument over “talking to other people,” according to the complaint.

When the victim tried to push past Carmickle to leave, he “grabbed her by the neck and attempted to strangle her,” according to the complaint.

The victim said Carmickle hit her in the nose with a closed fist, causing her to lose consciousness at least twice, both during and after the assault.

At the end of the interview, the victim said again that she didn’t want to press charges because she was afraid Carmickle would kill her. She left the hospital “before she was fully evaluated by hospital staff,” according to the complaint.

Given the serious nature of the injuries, police believed there was probable cause to charge Carmickle with 1st degree strangulation and 2nd degree domestic violence. He was taken into custody was on Wednesday, Sept. 1.