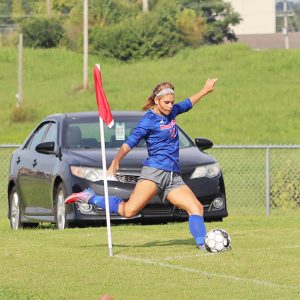 Photo: Veronica Shroeder
Freshman Laykin Irvin took a corner kick during the Lady Titans’ win over East Jessamine Saturday. Ivring went on to score a goal off a pass from senior Marlie Charles.

The Mercer County Lady Titans were home Saturday, Sept. 4, for a morning game against the East Jessamine Lady Jaguars. They’re both young teams who have struggled to get the “W’s” this season, but Mercer earned the win, 4-1.

Early morning games sometimes mean sluggish starts, and that was how the Lady Titans began the game. Players were unable to find their feet early in the game and connect with one another.

Head Coach Josh Culver made some changes in the formations, starting freshman Sarah Porter on the back line and moving senior Marlie Charles to mid field. Senior Emma Kiernan was back and able to play most of the game. She and Charles made several good connections up front passing the ball, but were unable to put one away early in the game.

Kiernan took a couple shots at the goal before freshman Laykin Irvin managed to break away 10 minutes into the game. Irvin’s shot was a little too strong and flew right of the goal.