Honoring The People Who Make The Horse Show Happen 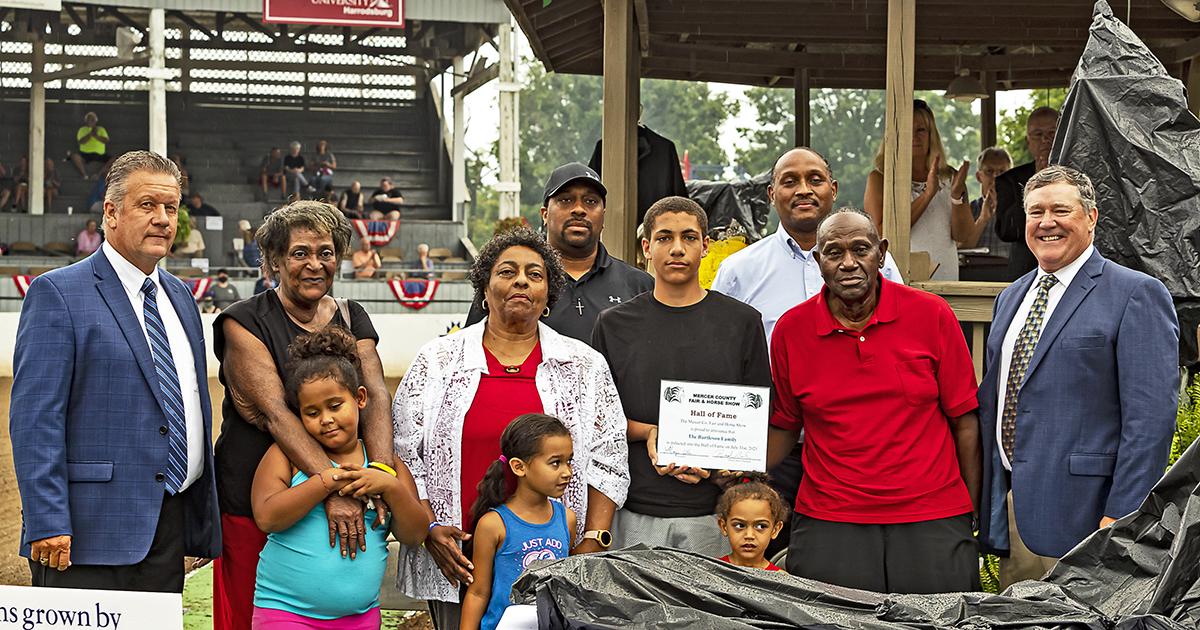 The Harrodsburg Herald/Robert Moore
On Saturday night, the Bartleson family, who have been participating at the Mercer County Fair and Horse Show for over 80 years, were inducted into the hall of fame. Back row, from left: DeShon Bartleson and Randall Bartleson. Second row from left: Horse Show Chairman Brad Noel, Rena Bartleson, Doris Bartleson, Adian Bartleson, Truman Bartleson Jr. and President LeMayne Ellis. Third row: Jacqueline, Shawnna and Jonah Gunkel.

On Saturday, July 31, the Whitaker Bank Mercer County Fair and Horse Show took a moment to honor the people who help the nation’s oldest continuous running horse show happen every year. The Bartleson family and farrier Eddie Williams were both inducted into the hall of fame.

For 80 years, there has been a member of the Bartleson family helping with the Mercer County Fair and Horse Show.

The fair was always something special for the family. At a young age, they knew the last week of July was fair week. It meant showing up early and staking out a spot to see some of the country’s best Saddlebreds. It meant getting to know the trainers and exhibitors and looking forward to seeing them show each year. It has become a family event, like a birthday or an anniversary.

The tradition started in the 1940’s with John Smith making certain the spectator seats were dry and free of dust on the old two level grandstands in the center of the track.

In 1964, the late Truman Bartleson Sr. took up the mantle from his father-in-law, working at the fair for 36 years. First he maintained the box seats and then directed traffic in and out of center ring at the gate, making sure those entering to present ribbons were safe and the aisles were kept clear. In 2001, after his passing, he was honored during the roadster grand champion class.

Now the fourth generation of the family, Paul Bartleson and DeShon Bartleson, step in to help when needed and the fifth generation, Adian, tries to man the gate at least one night during the fair learning about the love and excitement for the Mercer County Fair that has been a part of the family for eight decades. 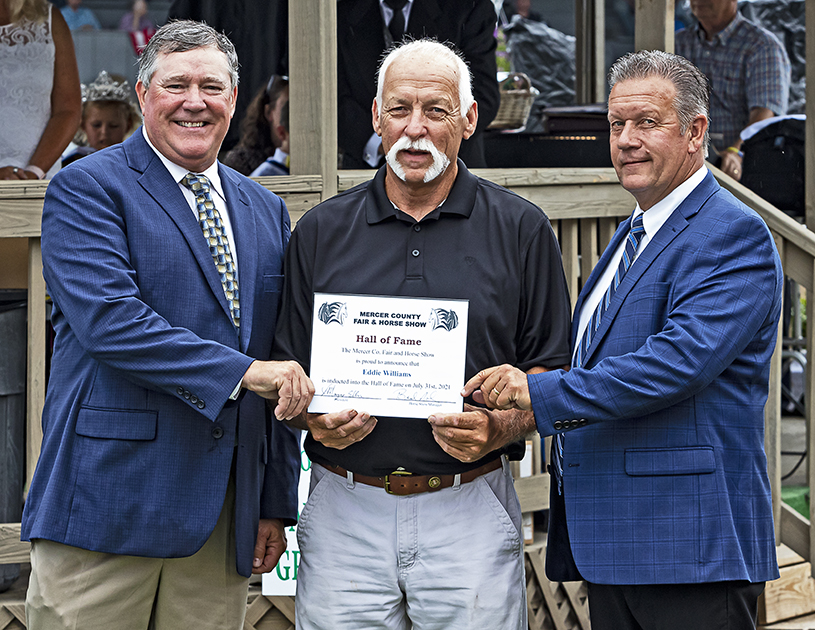 The Harrodsburg Herald/Robert Moore
Farrier Eddie Williams, who has been shoeing horses at the Mercer County Fair and Horse Show fsince 1987, was inducted into the hall of fame. From left, Horse Show Chairman Brad Noel, Eddie Williams and President LeMayne Ellis.

Eddie Williams has been shoeing horses since 1977, and first discovered the Mercer County Fair and Horse Show in 1981, six years later becoming the fair’s permanent farrier. He has dedicated his life of work to caring for horses, working for many farms and shows throughout Tennessee, Kentucky, Georgia, Alabama and other states.

Originally from Alabama, Williams was determined to work with saddlebreds and knew Kentucky was the place to be. He got his start by making horse shoes at shows before striking a relationship with Dick Gray and traveling to central Kentucky to work on his horses.

“The camaraderie and opportunity to meet amazing people across the country has driven Williams to build many relationships, and simply by doing his job with integrity and kindness, he has impacted the lives of many, many people while in Harrodsburg each year.

Over his long career he has seen many things and experienced so much across the Saddlebred business and right here in Harrodsburg. Williams is an honest man, who has always done what he could to put the Mercer County Fair and Horse Show in the best light possible, and has certainly made an impact on our entries and their owners throughout three and a half decades of service to the longest running horse show in America.

“Williams’ hard work and dedication to his craft is only outdone by his ability to lighten the mood and make people feel welcome. He has certainly had a profound impact on the Mercer County Fair and Horse Show and all of the contestants, representing the event in an upstanding manner,” said Brad Noel.

For more great stories, check out this week’s issue of the Harrodsburg Herald online or on the newsstand.