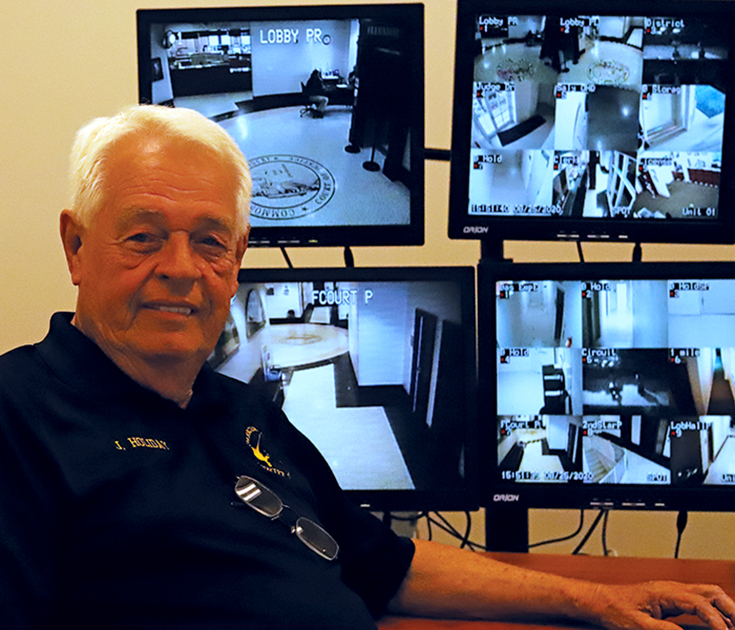 The Mercer County Fiscal Court were warned about a possible shortage in bailiffs at the judicial complex unless action is taken.

Garland Christopher asked for a $30,000 increase in the county budget for bailiff salaries.

Christopher said bailiffs last about 3 years, which he attributed to the low pay. The Kentucky Administrative Office of the Courts pays the first $9 an hour. He said Boyle County pays $10 while Anderson County pays $11. Only Mercer County just pays the $9 an hour.

“It’s just becoming increasingly, increasingly difficult,” Christopher said. He said it was hard for people of his age group. Most of the bailiffs, who are retirees, work part-time—99 hours a month.

“It just creates a real hardship,” he said.

He said he was willing to take a pay cut to $12 an hour to work 40 hours a week. He currently works two and a half days a week.

“Somebody needs to be there every day,” he said.

Recruiting new bailiffs—also known as court security officers—has been made difficult by the COVID-19 pandemic. Christopher said the Department of Criminal Justice Training  is just reopening and it’s an 8-12 week process.

County Attorney Ted Dean said the only reason the situation hasn’t boiled over yet is because courts are still doing teleconferencing.

If there are not enough bailiffs, Dean said the judge will order deputies  from the Mercer County Sheriff’s Office to serve as bailiffs.

“The sheriff is obligated to provide security up there,” Dean said.

He said without Christopher and his he would have to split his office’s resources.

“I don’t have to worry about the courthouse because Garland’s got it,” Kelty said. “What these guys do is very important.”

Judge-Executive Milward Dedman said the magistrates would discuss the proposal and get back to them.

After a discussion, the magistrates agreed to allow the animal control officer to issue tickets.

Dean said the officer, Kurt Baker, is being called out to same place two or three times. Dean said people were not cooperating.

“Clearly we have to rachet it up,” he said.

Dean said county ordinance allows Baker to issue citations. He said he prefers that Baker issue e-citations, which would be filled out by Dean’s staff and could be served by deputies from the sheriff’s office or other law enforcement officers.

• Approved renumbering two ordinances with the same number. The ordinance relating to the annual budget for fiscal year 2020-2021 will be renumbered 2020-4 A while the budget amendment for unbudgeted receipts from the COVID-19 relief fund C075 will be renumbered to 2020-4 B.

• Approved using Tri-K Landfill for dead animal removal. Dedman said they are not advertising the service’s return they’ve worked out the kinks

“I’d like to take a couple of weeks or so to see how it works,” he said.

• Approved jail expenses. The magistrates voted to pay Boyle County Fiscal Court $39,272.54, $3,000 for jail administrative fees for joint jail operating expenses and $11,425.42 for revenue payments. The latter are pass-through funds for the jail Mercer County has received from the state.

The next meeting of the Mercer County Fiscal Court will be held on Tuesday, Sept. 8, at 10 a.m.