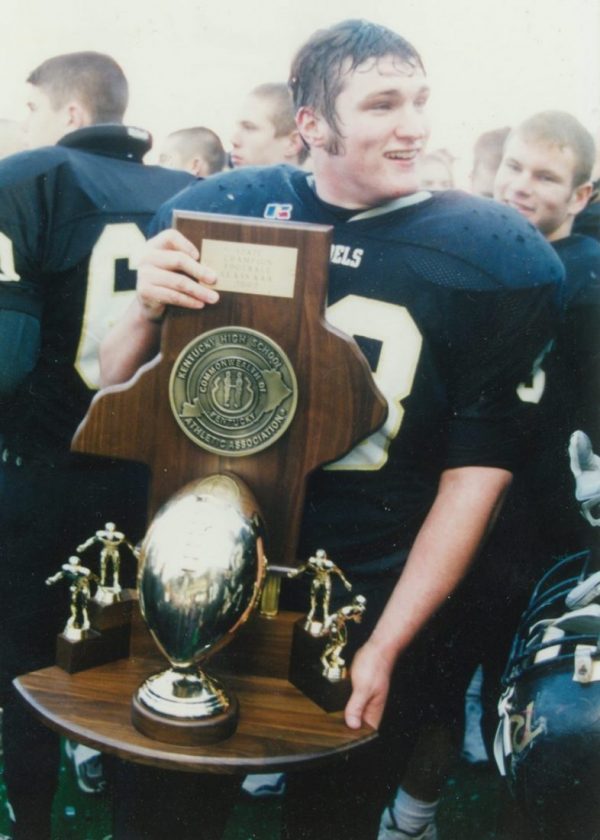 Photo Submitted
Senior Brad Scholtz celebrates with the team after a win in the 2002 Class AAA State Championship.

Winning a high school football state championship is something most athletes and coaches dream of. It’s a remarkable feat that only one team within every class in the Kentucky High School Athletic Association (KHSAA) can take home each year. Even more remarkable is winning five state championships all in a row.

The 1999-2003 Boyle County Rebels football program led by Head Football Coach Chuck Smith accomplished something that no other Kentucky high school football team up to that point had accomplished by winning five straight KHSAA football championships. Out of the five seasons, four of them had undefeated records and ended a five year run with a record of 73-2. Forty-seven games were won consecutively throughout the 75, bringing them just three games short of the KHSAA record for most consecutive wins, but they did manage to tie the record for most consecutive seasons without a loss, not counting tied final scores at three games.

“I would describe the team as disciplined both on and off the field,” said Brad Scholtz a Boyle County football player during their five championship seasons. “It is a term and a mentality that was beat into our heads on a daily basis and became a way of life for us. It was always our number one goal to never get out worked or out disciplined.”

The star-studded rosters included many athletes who would continue to play at the collegiate level, and two of who played in the NFL. Travis Leffew, a 2000 graduate, and Jacob Tamme, a 2002 graduate, both had NFL careers.

Leffew would make the practice squad for several teams over his two-year career within the NFL. Meanwhile, Tamme made a name for himself in the NFL. After graduating as a Rebel, he went on to play as a Kentucky Wildcat, where he would set school records and become one of the best SEC tight ends of all time. Tamme finished his career as Kentucky’s all-time top pass-catching tight end and second in the history of all SEC tightends with 133 catches for 1,417 yards. He was then drafted in the fourth round of the 2008 NFL Draft to the Indianapolis Colts, a perfect pairing for him to catch passes from NFL Hall of Famer Peyton Manning. Tamme would shine in just his second season, becoming one of Manning’s most targeted receivers, getting 67 receptions for 631 yards and four touchdowns.

Having played on the big stage with the Rebels, Tamme eventually found himself on the biggest stage football has to offer. He signed with the Denver Broncos to once again pair up with Manning, where he would play in the 2013 Super Bowl as a part of a record-setting offense.

Tamme retired from professional football in 2017.

Even outside of their two eventual NFL players, the roster was filled with stars. Many of the players from this five year stretch still hold school and state records.

No matter how talented these teams were, the coaching staff throughout this time were a huge factor in their success.

Head Coach Chuck Smith has brought the best out of his Rebel in each season he’s been with the program. He took over as head coach for them in 1992 and had great success before taking a job as a linebacker coach at the University of Kentucky.

He would eventually find his way back to the Rebels in 2014 and would add one more championship to his list in 2017. He retired in 2019 with a coaching record of  234-69. Leading the program to those five straight titles, Smith surrounded himself with a solid supporting casts of assistant coaches including Sean Baker, Frank Crossman, Brian Deem, Jeff Hester, John Hodge, Chris Pardue, Chris Mason, Chuck Miller, Tim Rogers and Greg Warren.

It took the entire staff and team to achieve what the 1999-2003 Rebels did. This strand of dominance alongside rival Danville Admirals helped the community gain the nickname “Title Town.” Combined, both Boyle County and Danville have won 19 state titles. Many Kentucky high school teams have yet to win five titles over the course of KHSAA history. For the Rebels to take home five titles in five years cements their legacy as one of the greatest football programs in the state of Kentucky.

It’s now been over 20 years since the start of this signature run. What were once a bunch of high school kids living a football dream are now grown adults.

After graduation, life seems to take friends and teammates in different directions, but as far as being a Boyle County football player, the message was clear, each of these men are still Rebels at heart.

Charlie Cox spoke on what being a Rebel meant to him, and the impact  it has made on his life.

“Without a doubt, growing up in the Boyle County football system shaped the person I am today,” he said. “The coaches I was blessed to have as a young man had the largest influence on my life outside of my parents. Being a part of the first four state championships at Boyle County was obviously an amazing experience. It’s quite fun to think back and talk about that run. But truly, the four state rings are a distant second to the life lessons taught and character instilled by my coaches.”

Cox said his life would not be the same without their impact.

“That’s something I’m sure hundreds of other former Rebels would also argue,” he said. “In addition to being an educator, I also strive to be the best father and husband I can be thanks to the examples they set forth for us as young men. I would personally like to thank every single coach I’ve had in my life. Coach Chuck Smith was an unbelievable influence on my life as a young man and continues to help shape and support the educator and leader I strive to be today. The same could be said for Coach Chris Pardue, Coach Jeff Hester, Coach Chris Mason and Coach Tim Rogers. Unbelievable men and unparalleled motivators. I can’t thank them enough for the impact they left on me.”

Scholtz also had more to add on the shared bond with his Rebel teammates and how thankful he was to be apart of the program.

“We were a family then and our bonds were tight enough that we could still call on one another today if we needed anything,” he said. “I’m thankful for the coaching staff, for being all of our second dads. Coach Smith is the greatest high school football coach this state has ever or will ever see. He saw potential in players that didn’t even see it in themselves and always found a way to bring that potential out of you one way or another.”

It is a new era in Rebel football, but the tradition and success still remain. As time goes on, the legacy and impact of the five straight titles grows.

Below is a list of other KHSAA records the Rebels accomplished during their run:

Eighth All Time Passing Touchdowns In a Career – Brandon Smith – 116