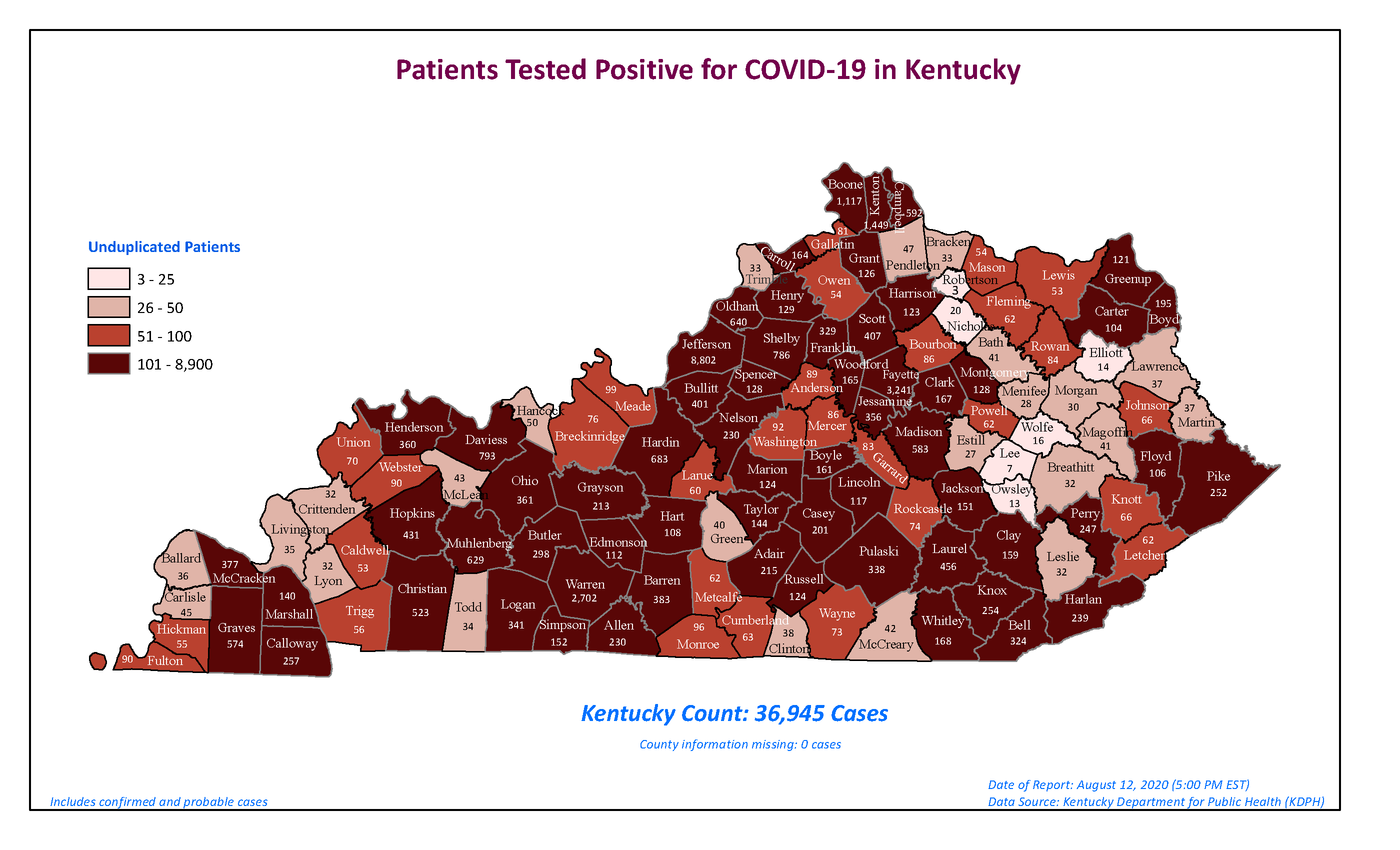 Gov. Andy Beshear announced the single highest number of positive cases since the beginning of the pandemic. Beshear said there are 1,163 new cases, which include cases from the last several days.

On Monday, the governor said the number of confirmed cases was low due to a technical issue with the state’s data collection system. He blamed the issue on a computer glitch caused because the contractor, Deloitte, changed the way the computer system operated. He said it may have impacted Sunday’s number, when 425 new cases were reported, creating duplicate cases. He said there have previously been issues with lab reporting, but this is the first technical glitch the state has experienced.

The number of new cases on Wednesday raises Kentucky’s total to 36,945. To put that number in perspective, it is over three times more than the total number of cases reported on June 1–10,046. Even though Kentucky has a population similar in size to that of Louisiana, the latter state has had 134,304 confirmed cases so far, with 1,179 reported by press time Wednesday, according to Worldometers.info.

“Today we set a record we didn’t want to set,” Beshear said at Wednesday’s briefing.

The coronavirus has spawned a legion of arm chair epidemiologists who criticize the statistics. Some have said that hospitals are inflating the numbers in order to receive more federal money, although an April post by factcheck.org found no evidence of hospitals deliberately miscoding patients in order to receive more money. The American Hospital Association estimated that the nation’s hospitals lost $202.6 billion from March 1 to June 30 due to cancelled services and the purchase of extra personal protective equipment, among other factors.

Gov. Beshear, who in his daily briefings has shared stories of Kentuckians who have been impacted by COVID-19, stressed that there are real people behind the numbers.

“We get caught up in the numbers,” he said. “These are people that we know and we care about.”

The governor said Kentucky’s positivity rate, which is based on a seven-day rolling average, is 5.26. It’s a decrease from yesterday.

“It is much higher than we would like,” Beshear said.

Included among the day’s new cases are 39 kids under five, the youngest only three months old. The governor also announced seven new deaths, raising the commonwealth’s toll to 790. At least 8,893 Kentuckians have recovered.

Even though today marks the highest new case count since the pandemic started, the governor said he believes the mask mandate is working. “We simply need more time to make sure we ‘ve got this virus under control before we can welcome kids back in the classroom,” Beshear said. He said he hopes COVID-19 is at its peak.

On Monday, the governor asked Kentucky’s school systems to delay returning to in-person instruction until Sept. 28. He said it was not an easy decision. Beshear said he desperately wanted his kids to get back to class.

“Distance learning is not the same,” he said.

Beshear said he hopes to avoid massive quarantines other states like Georgia have seen. At one school district in Georgia, over 900 people are in quarantine, including over 800 students.

He said schools that reopen too early will not be able to learn from the mistakes made by others. The governor said he does not believe in gambling and experimenting with young lives.

“We don’t want to be the canary in the coal mine with our kids,” Beshear said.

He was asked about the Catholic schools in Lexington, which have announced they will reopen on Aug. 17, despite the governor’s recommendations.

“I disagree with their decision, I don’t believe it’s safe,” Beshear said.

He was asked twice if he would force schools to postpone reopening via executive order.

“That’s not how we do things,” he said. However he said he would act if there was a proven threat to people in the schools and no action had been taken to prevent it.

Citing the high numbers, the governor said he hopes the school districts will make different plans. “I hope they will reconsider,” he said. “The numbers would suggest it’s not the right decision.”

The governor was also asked why schools had to hold off reopening while the Kentucky Derby, which has been moved to Saturday, Sept. 5, can still happen.

He called that a false equivalency. He noted that school involves students and staff being inside together for more than six hours a day, five days a week, while the derby is a one time event where most of the participants will be outdoors. The governor said it looks like Churchill Downs will be at 15 percent occupancy. He said spectators are being moved outside and spread out. He said he believes capacity at the derby will fall even further. There was no one in the audience at the Belmont Stakes in June.

Around the world, there are now over 20.7 confirmed cases, with 751.214 deaths. So far, over 13.6 million people are listed as having recovered on Worldometers.info.

Locally, there has been no new cases since yesterday. There are still 14 active cases, with four people hospitalized, according to the Mercer County Health Department’s Facebook page. There have been no known deaths related to COVID-19 in Mercer County and 77 people have been listed as recovered.