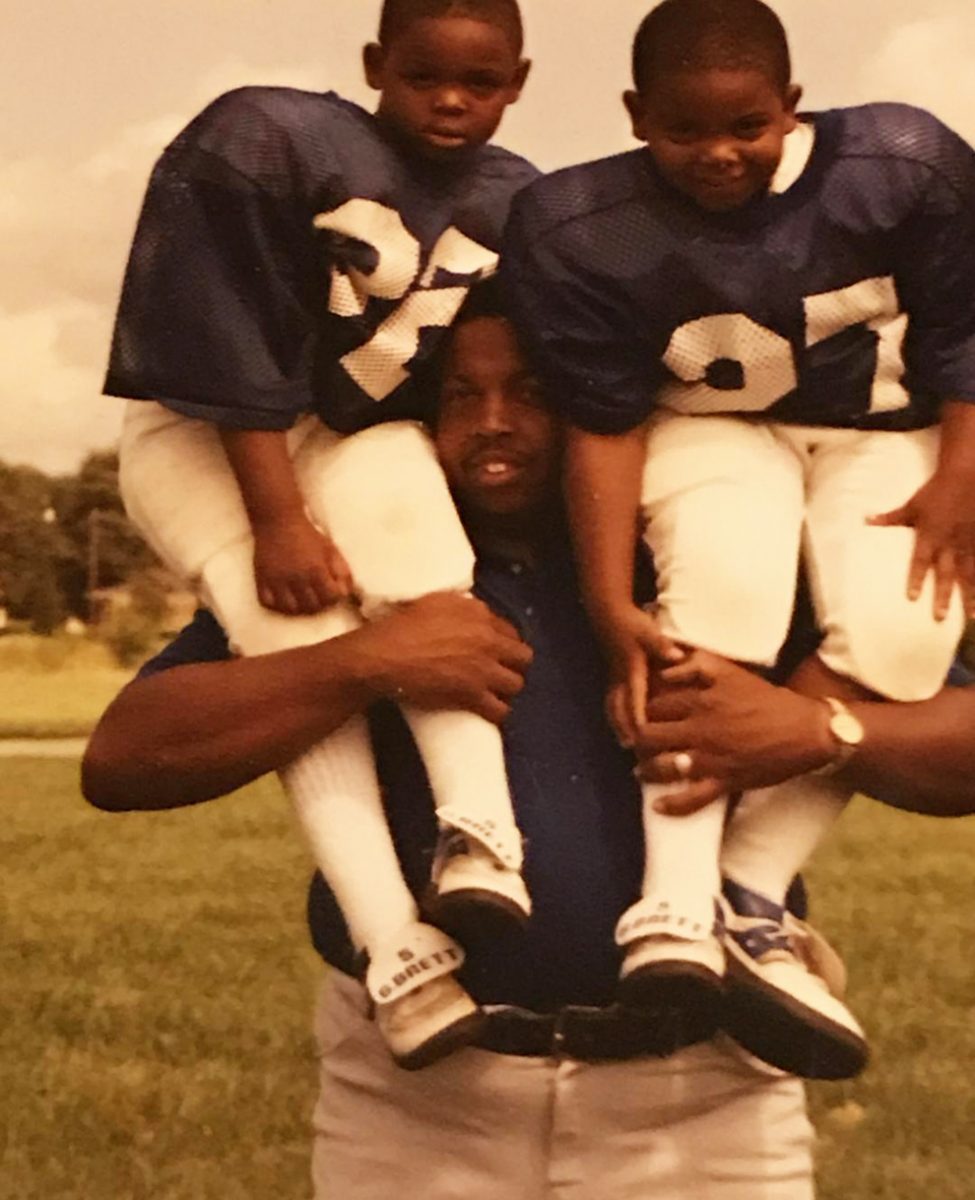 Johnson was reluctant to leave his job at Christian County in 1974, and it took quite a lot of convincing from then Harrodsburg Superintendent Forrest Williamson to get Johnson to his now hometown. Johnson says Williamson called him several times, each time asking Johnson to come interview for the head coaching position vacated by Bill Baldridge, who left to become an assistant for the Morehead State Eagles. Johnson was hard to persuade, but Williamson offered to meet him halfway, in Beaver Dam, and buy Johnson dinner.

“He offered me, he said ‘I need a good football coach, a good teacher, and I need somebody that the African American kids can relate to.’ I said, well sir I appreciate the offer but I’m not interested because I’m pretty happy where I am at Christian County. So he said, ‘let me just give you a figure.’ So he gave me a figure, and I said I’m still not interested,” said Johnson.

Johnson went home and a few days later received another call from Williamson,  Johnson was not interested. Williamson waited a few more days before he called again, this time offering another “figure.” Johnson was chuckling as he told the story. He had to tell Williamson “I don’t mean to turn you down, I’m just not interested.”

“So Williamson calls back finally, a few days later, and says ‘here’s a figure, not only do I want you to be football coach, I want you to be athletic director. Just come up and look at the campus.’ So I said, okay,” said Johnson.

The idea of beginning a career in administration was enticing to Johnson, the city was to his liking, and thus began an eventful and remarkable career for Johnson as a Pioneer.

Johnson is 73 now and has spent his life in devotion to education, leadership and coaching. His demanding and gritty coaching style was notorious in Harrodsburg and was responsible for the development of many great athletes and teams. During his time as the Hog’s athletic director, Harrodsburg football became a Class A powerhouse and appeared in three state championship games, the track and field team won over 50 individual state championships and six team championships, and an astonishing amount of athletic talent poured out of a small town with just around 7,000 inhabitants at that time.

Johnson was the athletic director, football and track and field coach and the “chief ball washer,  janitor, and everything else, you know,” said Johnson.

He led Harrodsburg High School in every form and fashion, and Johnson earned respect for himself as a coach and a teacher, not only in Mercer County, but across the state and the nation. The culture established across the entire Harrodsburg school system during Johnson’s 25 years as athletic director was one that came with high expectations and had a focus on tradition.

The Harrodsburg tradition was built by rough, demanding, but fair coaching. The way Johnson coached football could not have been more honest. The other team may have known where they were running the ball, but he still expected his team to make it work and outwork their opponent on every snap. The high expectations he set for his players on an individual level, led to success for the whole team.

A lack of effort was damning in Johnson’s eyes, “hard nose, no excuses, no lateness, no tolerating loafing and if you loafed there was a price to pay. We called it PTA’s- pain, torture and agony. You didn’t want to get on one of those,” said Johnson. PTA’s were Johnson’s form of accountability, his accountability to the players so that they know he wants the best for them, and their accountability to their teammates, ensuring their best effort. 200 yards of bear crawls, 200 yards of backflips and Johnson says, “by the time you got through, you decided ‘I don’t want to be late again, I don’t want to loaf again’,” said Johnson.

Johnson says the talent was in Harrodsburg, and his job was to get the best out of his players.

“Ain’t no question about it. The talent was here. They just chose to come out and exhibit that talent. So that was a wonderful thing. We were a power football team. We would run the four hole. You could run wherever you want to but cover that four hole, and I expect you guys to root that four hole out for me,” said Johnson.

Discipline, high standards, and a tradition of excellence, may be the best definers of Johnson as a coach. Off the field, Johnson excelled at getting the best out of his students.

He was the runner up for the Walt Disney Company Outstanding Teacher of the Year Award in 1996 and is now serving a term on the Kentucky Board of Education.

Johnson was a great teacher, not only because of the knowledge he imparted, or the motivation he gave, but the care he provided. The care Johnson had for each person he came in contact with was not bound by his own surroundings, but rather by the needs of others. Alvis Johnson’s sons Derrick and Dennis Johnson experienced this guidance first hand, and often speak about how grateful they are for his care driven style of coaching and teaching.

“He always pushed people to their limits, no matter who you were, he had an expectation for you, and he wanted all the kids to reach them,” said Dennis Johnson. The former Harrodsburg Pioneer and Kentucky Wildcat is heading into his sixth year as head coach of the Woodford County Yellow Jackets, and he tries to instill many aspects from his dad’s coaching style into his own coaching.

“He was able to bond with the kids, and the families, the moms and dads, he was honest and they could trust him,” said Dennis Johnson.

Derrick Johnson is one year older than his brother Dennis and experienced many of the same scenarios throughout his football career and  childhood, being coached by his father.

“My father was a very strict, in your face, matter of fact person, but what made him different than a lot of coaches, was that every player that played for my father knew that he loved them and that he would lay down his life for each and every one of them, and it wasn’t something he said, it was something he showed on a daily basis. That’s what gives him the leeway to be that tough and stern and strict on them,” said Derrick Johnson.

Alvis Johnson is a role model to his son Derrick, and as part of the Woodford County coaching staff alongside his brother Dennis, he tries to utilize some of his father’s style when coaching the Yellow Jackets.

Dennis and Derrick Johnson are a substantial part of Alvis’ legend. The two began practicing with the Harrodsburg varsity football team when they were only in the third grade, and they both played in at least one state championship game. Alvis Johnson told the story of how in the 1996 state championship game against Beechwood, the Harrodsburg defensive line was elite, made up of three players that would end up in the NFL. Dennis Johnson played defensive end, Julius Yeast played opposite of Dennis on the other end, and Derrick was in between them. Yeast picked up an injury early in the game and so Beechwood would only run the ball in the opposite direction of Dennis, the future Sports Illustrated National Player of the Year. So Alvis moved Dennis to middle linebacker, where he claims Dennis made somewhere between 30 and 40 tackles. “Buddy Ryan was there, he said, ‘well hell I thought it was a young Lawrence Taylor.’ he said, ‘he covered sideline to sideline,’” said Alvis Johnson.

Alvis’ sons played a big part in the longevity of the Johnson family in Harrodsburg. Johnson received interest from other high schools and even colleges, offering him more money to come and coach their team.

“Well it honestly boiled down to- We looked at it, it was a small town, it was a great place to raise a family. And my boys fell in love with the town. Cause I had the opportunity to move on on several occasions, and they would say, ‘Dad Harrodsburg is our home,’” said Johnson.

Dennis and Derrick love their hometown and say it made them the men they are today.

“There’s nothing like your hometown. I’m always going to be Harrodsburg first, it made me the man I am today. He (Alvis) had a ton of opportunities to go to college and other high schools, but we fell in love with Harrodsburg, and we liked it so we decided to stay and it was great for everybody,” said Dennis Johnson.

After Dennis graduated in 1998 Alvis left his position at Harrodsburg to become an assistant athletic director at the University of Kentucky, where both of his sons then played football.

He was inducted into the Kentucky Track and Cross Country Coaches Association Hall of Fame in 1992 and into the Kentucky High School Athletic Association’s Dawahares/KHSAA Hall of Fame in 2004. During his time in Harrodsburg Johnson was voted Kentucky’s track coach of the year eight times. In 1977 he was voted the Kellogg Corporation National Track Coach of the year, and also received nominations in 1987 and 1992. He was voted Kentucky football coach of the year twice, in 1991 and 1996, and 1996 is the only time a coach and two of his sons have been selected first team by the Associated Press.

Johnson is responsible for the tremendous growth shown by a countless number of student-athletes during his time at Harrodsburg High School. He has sent more than 40 athletes on to play at Division I schools, totaling over $1.7 million in scholarships.

When Johnson was asked to summarize his time at Harrodsburg into one word, humility prevailed, and he responded, “blessed.” As grateful as the city of Harrodsburg and graduates of Harrodsburg High School are to him, he is just as grateful to have become a Pioneer, and to have made it his home, now for 46 years.