Even As Jail Population Goes Down, Mercer County’s Share Of Expenses May Go Up 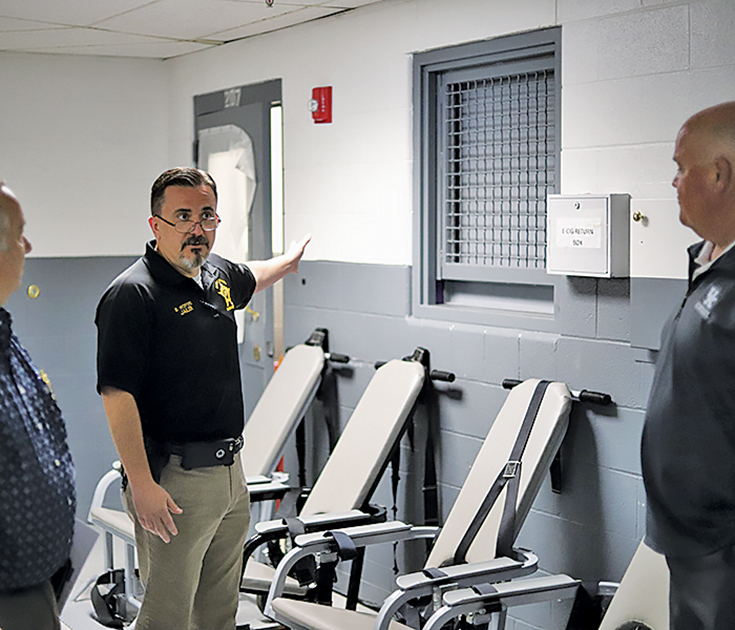 The Harrodsburg Herald/Robert Moore.
Boyle County Jailer Brian Wofford took officials on a tour of Boyle County Detention Center a few years back when the regional jail, which is designed to hold a maximum of 220 people, was overcrowded. Due to lack of space, inmates at that time who presented a danger to themselves or others were often strapped into isolation chairs and placed near the supervisor’s desk.

Editor’s Note: The cutline on this picture has been edited for clarity and context.

An agreement made to save Mercer County money on jail expenses could end up costing the county more if recent trends caused by COVID-19 continue.

Back in 2018, Mercer and Boyle Counties agreed to amend the interlocal agreement, which allows Mercer to pay a smaller share of operating costs at the Boyle County Detention Center.

Mercer officials had complained that they were paying too much toward the jail because the interlocal agreement established a floor of 35 percent for Mercer based on its percentage of the jail population. In 2018, both counties agreed to set the floor at 27 percent. Earlier this month, both counties agreed to a 29 percent ratio, based on the jail population from the year before.

On Tuesday, Mercer County Attorney Ted Dean told the fiscal court that they may see a big increase in jail expenses next year.

Law enforcement, officers of the local courts and other officials have been working to keep the population at the detention center low because of fears of a COVID-19 outbreak. They have been trying to avoid a situation like what’s happened at the Kentucky Correctional Institution for Women in Peewee Valley, where 159 inmates and 15 employees had tested positive for the novel coronavirus in July, according to the Louisville Courier-Journal.

Seven inmates sued the prison in federal court, blaming prison officials for a “complete failure to respond to the exceptionally severe risks posed by the outbreak.”

Because the population at Boyle County Detention Center has been so low—on Tuesday, the population was 161, according to the jail website—the ratio may be different next year.

Dean told the magistrates that because Mercer   is “real close” to having a 50-50 split of the inmate population with Boyle County.

Because the inmate ratio  this year will be used to determine the split of jail expenses next year, Dean warned the fiscal court that it could have a big impact on their budget next year.

“You can expect to see those costs go up,” he said Tuesday during the fiscal court meeting.

Over the past several years, the detention center, which was designed to hold a maximum of 220 inmates, has been almost perpetually overcrowded, with jail staff forced to isolate prisoners by strapping them in chairs and leaving them in the hallway. Several times in 2017 the population swelled to over 400 inmates, forcing jail officials to send inmates to other counties.

Monica Sumner of Brandstetter Carroll Inc. of Lexington, a consulting firm hired to deal with jail overcrowding, used a nautical metaphor to describe the situation being faced by Mercer and Boyle.

“These two counties are like a canoe in the ocean,” Sumner said, “They are lost at sea.”

Now, because of the interlocal agreement, Mercer’s share of expenses in running the jail may go up even as the population goes down.

On Tuesday, magistrates  also approved a $40 per diem for inmates at the detention center.

The next meeting of the Mercer-Boyle County Joint Jail Committee will be at 1:30 p.m. on Friday, Aug. 7.