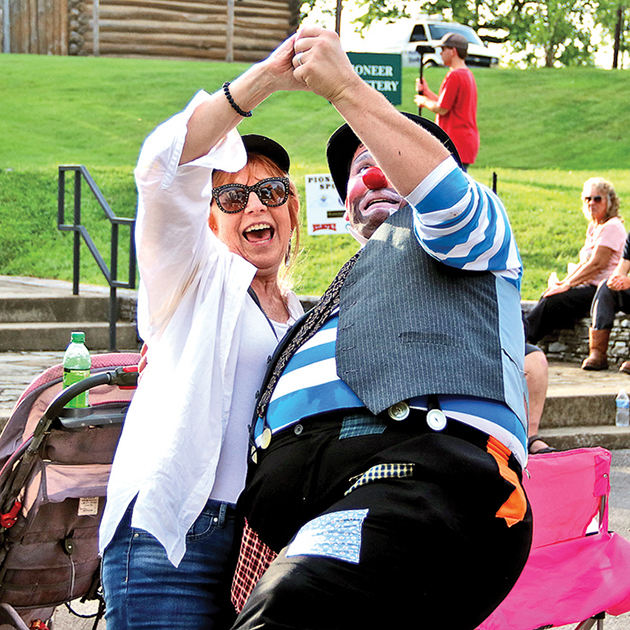 The Harrodsburg Herald/Robert Moore
Goldie Goldsmith-Vigneri and Clem the Clown kick up some fun at last year’s Pioneer Days. This year’s festival is canceled, but organizers hope to return next year.

Another event has been canceled because of the COVID-19 pandemic. Pioneer Days, the festival scheduled for Aug. 14–16 at Old Fort Harrod State Park, will not be held this year.

According to a press release, the Big Jack Pearson Memorial Car Show will go on as planned on Saturday, Aug. 15, from 10 a.m. to 2 p.m.

Organizers for Pioneer Days say they will contact all sponsors and vendors in the next weeks offering a refund or a “hold” of funds for 2021.

Normally, with Independence Day around the corner, Mercer County’s festival season would be in full swing. But even with economy reopening—restaurants were able to reopen at 50-percent capacity starting on Monday—the COVID-19 has resulted in a large number of cancellations or events being rescheduled.

Events canceled this year include the Settlement and Raid at Old Fort Harrod State Park, all the Downtown Market Nights scheduled for May, June and July and the production of “the Wizard of Oz” at Ragged Edge Community Theatre.

While there will be a fireworks show at Anderson-Dean Community Park on July 3, the Lights Over Herrington Independence Day fireworks show—the biggest event of the year on the lake—has been canceled.

Also canceled is the outdoor production of “James Harrod: The Battle For Kentucky.”

Organizers say they hope to resume the production at Old Fort Harrod State Park next year.

The 2020 Grand Ole Mercer County Fair and Horse Show will happen, but it won’t be the same as in previous years. The horse show and livestock events will happen, but no spectators will be allowed. Some beauty pageants are canceled while others are being rescheduled. There will be no carnival and the motorsports will be moved to the fall.

The fair board announced the horse show will take place July 22-25 without spectators.

The Ms. Mercer, Miss Mercer, Miss Teen, and Miss Pre-teen pageants will be held at another time but within the time line for state pageant participation.

The Big Jack Pearson Car Show is presented by the Central Kentucky Hotrodders.

The car show is free to the public. There is a $15 registration fee for vehicles.