Yeast Appointed To Tourist Commission Board 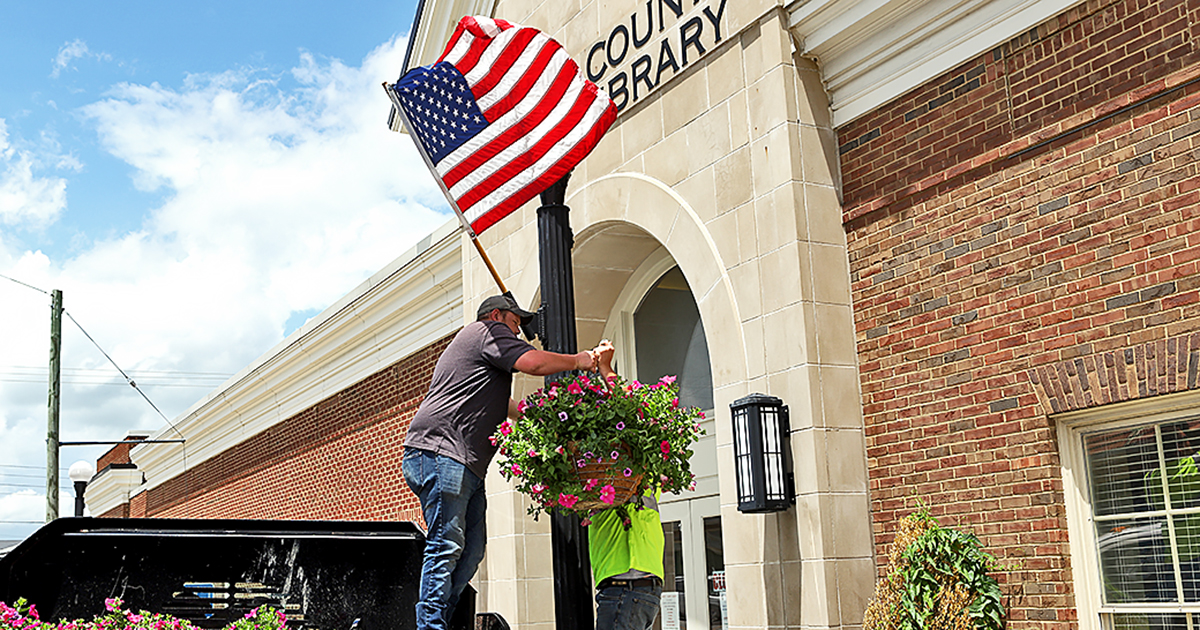 City workers began hanging flower baskets downtown last week. The flowers were paid for through donations as well as a contribution from the city government. (The Harrodsburg Herald/Robert Moore).

Previously, the city and the Tourist Commission split the revenue equally. In March, the commission voted to allow local restaurants—which were forced to shut down their public dining areas because of the COVID-19 pandemic—to not pay their restaurant taxes for March and April. Earlier this month, the commission extended the tax freeze.

When the tax resumes, the rate will remain unchanged. The ordinance will exempt nursing homes and assisted living facilities. Mayor Art Freeman said the number of people who dine at those facilities is small.

Commissioner Scott Moseley asked about exempting the hospital as well. Freeman said he hadn’t heard any complaints from the hospital, only from the nursing homes. He said the hospital serves a lot of outside meals.

The mayor also suggested the city change how it distributes the tourist development funds. Formerly, the city used its half of the restaurant tax revenue to fund events that would draw tourists to the area. Freeman said the city needed to move to a matching fund model, in which the applicant must raise funds to match the city’s contribution. Freeman said if the jazz festival asked for $20,000, they needed to be able to raise that amount.

“Let ’em raise $5,000 or $10,000 if they can do it,” the mayor said. He said the Tourist Commission was going to operate on less money than previously. Because of the decline in total restaurant receipts, Freeman said the city has cut tourism development grant fund recipients anywhere from 10-percent to 40 percent in the new budget.

The city commissioners will give the ordinance a second reading at their June 8 meeting. The subject came up again later, when the commission voted to help pay for the downtown flowerpots.

Last week, city workers installed 75 baskets, including new baskets and flowers that cost over $5,330. The cost is usually paid out of the restaurant tax. Freeman said he had met with the Harrodsburg First Main Street Program design committee and asked them to raise money. He told the commission they had raised over $2,600 via Gofundme and another $1,000 in donations. He said 36 people have donated so far and asked commissioners to donate as well.

The mayor also asked the commission to pay the rest, which he said would cost about $1,700.

Commissioner Charlie Mattingly said in the future, orders should not be made by people outside the city government. Mattingly said the decision to buy new flowers was made without his knowledge or approval.

In related business, the commission appointed Tiffany Yeast to serve as the city’s representative on the Harrodsburg-Mercer County Tourist Commission. Yeast will serve the unexpired term of JoEtta Wickliffe, who was removed from the board in April.

Yeast has served as executive director of the Kentucky Office Of Budget Administration since 2018. She will join Joan Huffman, who was appointed last week by the fiscal court to serve as the county’s representative on the board.

“I think they’re going to be a big asset to the board,” Mattingly said.

In other business the Harrodsburg City Commission:

The commissioners also voted to hire Mason Moss as assistant director of the water treatment plant, however, they tabled a vote on giving Moss a four dollar an hour raise.

“If we had to pay every city employee what they were worth, we’d really be broke,” Freeman quipped.

The commissioners voted to promote Patrolman Aaron Steele to corporal. Steele will receive $1.50 raise it will be broke up as $.75 now and another $.75 after his six month probation is complete.

The commissioners also voted to award the bid for paving Beaumont Avenue to Mego. Mattingly said $248,000 project includes paving and milling out Beaumont from Main Street to US 127. The city will be reimbursed by the Kentucky Transportation Cabinet.

In somewhat related business, the commission agreed to pay $211.54 to Sarah Campbell to repair a tire damaged by hitting a pothole on Bohon Road.

Mayor Freeman said city workers are doing a great job mowing. He said some people are dumping garbage at the park. They need someone to pick up garbage. He said cans are filled with manure and hypodermic needles, among other items. Mike Steele, a member of the park board, had volunteered to pick up garbage but said it was too dangerous. Freeman asked the Harrodsburg Police Department to step up patrols at the park. He said neighbors complained they hadn’t seen any police patrolling the park.

Commissioner Isham asked about borrowing money to get Anderson-Dean Community Park running. Freeman said the restaurant tax could not be used to pay a debt.

When sports resume at the park, the concession stands will not be opened up, but the park will rent spots to food trucks to offer concessions, Freeman said.

In addition, the city is in the process of applying for a federal CARES Act grant. Mayor Freeman said he hopes it will help city to recoup some of the lost income. Huffman said the grant will allow the city to be reimbursed based on the city’s population. That includes lost income such as water bill penalties and park rentals as well as expenses such as disinfectants. She said they were looking to see if it would help to recoup lost wages, restaurant taxes and payroll and net profit taxes. Harrodsburg is eligible for as much as $610,000, she said.

The next meeting of the Harrodsburg City Commission will be Monday, June 8, at 6 p.m