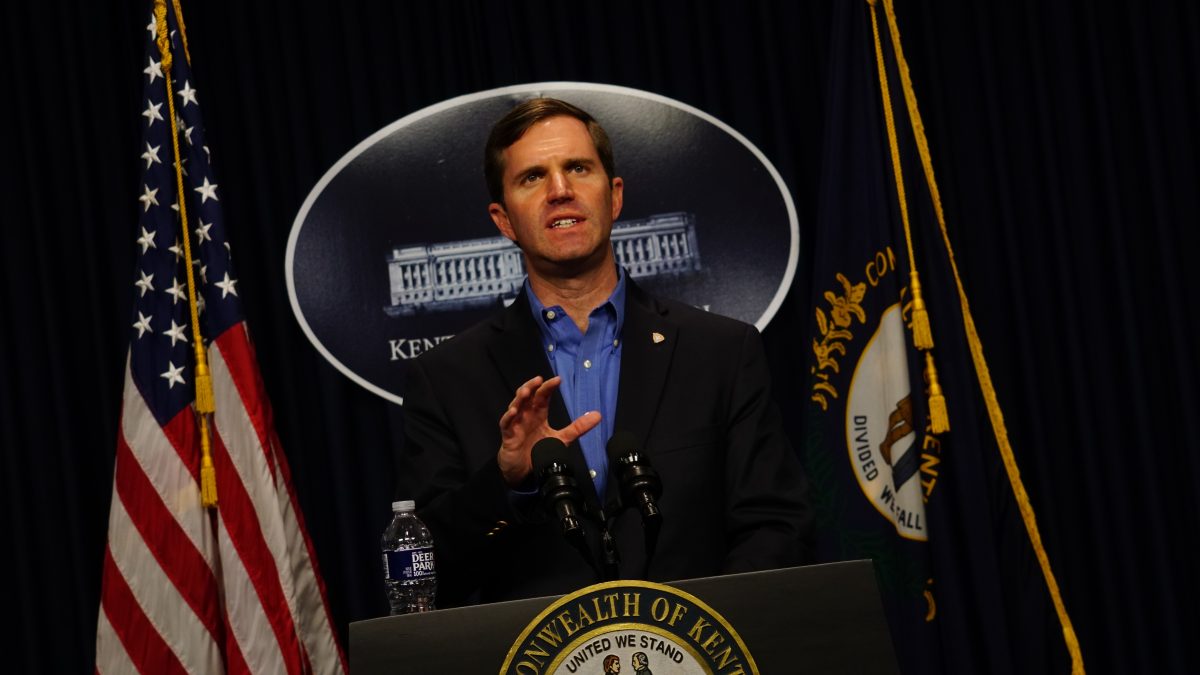 Gov. Beshear has announced that Kentucky’s public schools will continue to be closed until May 1 because of concerns about the coronavirus. Image: Kentucky Governor’s Office.

Gov. Andy Beshear has asked Kentucky’s public schools to stay closed until at least May 1.

At Thursday’s briefing, the governor said he plans to talk with district leaders during the middle of April about potentially extending the closure for the rest of the school year in order to protect the state from the coronavirus.

“There is a very real chance that we don’t go back to in-person instruction this year,” Beshear said.

He first asked schools to close for at least two weeks back in March, then extended that closure until April 20.

Students are expected to continue learning at home through their district’s distance learning plans. State education officials had already told districts to prepare enough lessons to last until early May, according to the Courier-Journal.

Kentucky has already canceled standardized testing scheduled for May.

The governor also announced he had expanded travel restrictions. Starting immediately, out-of-state travelers entering Kentucky must self-quarantine for 14 days. The governor also said overnight stays at inns at Kentucky state parks will no longer be allowed. On Monday, March 30, Beshear issued an order to limit Kentuckians’ out-of-state travel. Exceptions to the order include travel to other states for work and groceries, to care for loved ones, to obtain healthcare and when required by a court order. Kentuckians arriving back in the commonwealth from out of state are required to self-quarantine for 14 days.

Beshear announced there were 100 new confirmed cases in Kentucky, bringing the state’s total to 770. In addition, there were 11 new deaths. So far, 31 Kentuckians have died. All but one individual had another health issue, the governor said.

Across the world, over a million people—1,002,159—have been diagnosed with coronavirus with nearly a quarter of those—236,339—in the US, which has become the epicenter of the pandemic. The US has over twice the confirmed cases as both the next two nations with the highest totals—Italy and Spain—combined. According to Johns Hopkins University, 51,485 have died, with nearly half of that amount in Italy—which has lost 13,915 people—and Spain—which has lost 10,348 people.

There were no new confirmed cases announced in Mercer County, but three new cases were reported in Boyle County, according to a press release from Ephraim McDowell Health. The patients are quarantining at home. This brings the current total for Boyle to seven cases. A Washington County resident who tested positive for coronavirus is quarantining at home, according to McDowell Health.

On Thursday, Cabinet Secretary Michael Brown announced the state will release nearly 900 inmates to protect both inmates and prison staff. Starting next week, 186 low-level felons who are within six months of completing their sentences will be released early. Brown said the inmates have not committed violent or sexual offenses and also suffer from respiratory or heart ailments. They must complete a health screening before release, they must have a residence where they will be quarantined for 14 days and they must not break the law once released or they will be returned to prison to serve out the rest of their terms. Brown said they are looking to release another 743 inmates after that.

Brown said they are stepping up efforts to clean the state prisons. He said inmates are working to create personnel protection equipment, which is in short supply in both Kentucky and across the nation.