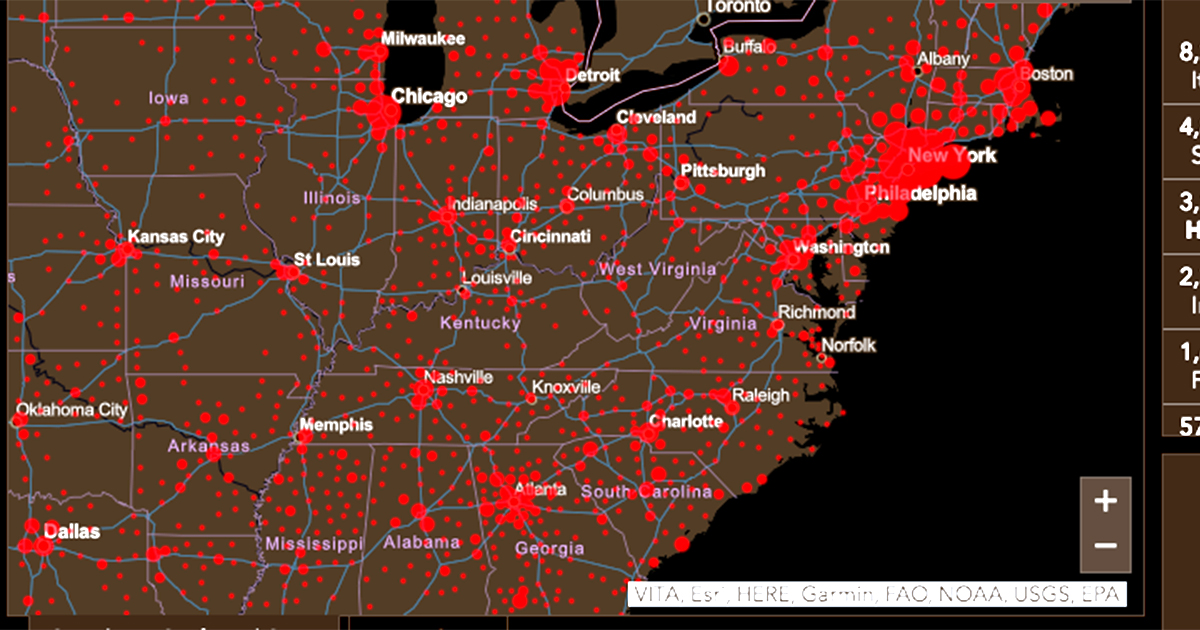 Mercer County has its first confirmed case of the coronavirus.

A 52-year-old female has been diagnosed with the disease, according to Kathy Crown-Weber, director of the Mercer County Health Department. Crown-Weber could not disclose any other details about the patient.

Before now, there had only been one close call. The health department has been following someone who shook hands with a man in Anderson County who was diagnosed. The person who shook hands with the man—allegedly over the sale of a boat—has nearly completed home isolation, Crown-Weber told the Harrodsburg Herald earlier this week.

Worldwide, the number of confirmed coronavirus cases has surged to over half a million, with the epicenter shifting from the People’s Republic of China to the United States of America, which now has more confirmed cases—86,012 in America to 81,892 in China. According to the Johns Hopkins University Coronavirus Map, the areas that are seeing the greatest increase in cases are the nation’s population centers along the coasts.

Some healthcare professionals have said they believe the number of people who have contacted coronavirus is far higher than what testing has so far revealed. But efforts to find out the real impact coronavirus has had on Mercer County and the rest of the state has been hampered by a lack of testing equipment. “We’re not limited by how many tests are done, we’re limited by how many tests we have,” Gov. Andy Beshear said during his press conference on Thursday, March 26.

Healthcare providers also need personal protection equipment (PPE) to perform the tests safely. But PPE has—like toilet paper and bread—become hard to acquire. Governors from several states have complained that they find themselves bidding against the federal government, which has far more resources than any state government.

The State Operated Area Technology Centers and the Kentucky School for the Blind delivered more than 10,000 Personal Protection Equipment (PPE) items to the Kentucky Department of Health and local health agencies. According to a state press release, this includes more than 9,000 of the critically needed N95 respirator masks, plus hundreds of gowns, gloves, wipes and more. Gov. Beshear said it had been a good week for Kentucky in acquiring PPE, but he still pushed back an announcement on the opening of the state’s first drive-thru testing facility until next week.

Asked by a reporter how much PPE the state had on hand, Beshear said, “not enough.”

Including the Mercer County case, the governor announced there had been 50 new confirmed cases of coronavirus on Thursday, the single largest increase in a day so far. That raises Kentucky’s count to 248 cases, which the governor said was still smaller than other states.

So far the state has spent more than $8 million and shut down many businesses and ordered all of Kentucky’s restaurants to close their dining areas. The governor is also asking county judge-executives and mayors to closely monitor parks and other public congregation areas for people not following the social distancing guidelines. Beshear asked local officials to shut down places where people are congregating. He gave the same authority to state parks, which are still open for hiking.

He also warned people traveling out of state—such as the college students and other young people who have been flocking to the beaches in Florida and elsewhere in the nation—to follow social distancing guidelines established by the Centers for Disease Control and Prevention. Yesterday, the governor announced that a returning spring-breaker had tested positive and he stressed the importance of following the CDC guidelines.

“It is your duty as a Kentuckian. It is your patriotic duty as an American,” Beshear said.
Gov. Beshear, along with the Kentucky Public Protection Cabinet have established the Team Kentucky Fund, a GoFundMe-style online platform to provide financial help to Kentuckians whose employment is affected by the coronavirus. The governor challenged those who are able to help to make a tax-deductible donation to the fund. A new website portal has been created to streamline the process for businesses looking to donate supplies and services for Kentuckians in need.
The state has also created the COVID-19 Reporting Hotline (833-597-2337) that will investigate complaints about non-compliance with coronavirus mandates. Labor Cabinet personnel will monitor the hotline from 7:30 a.m. to 9 p.m. ET. A new website where Kentuckians can visit to make online complaints is kysafer.ky.gov.

Each day at 5 p.m. ET, Gov. Beshear is holding briefings broadcast on KET station WKLE 46 and online at his Facebook and YouTube pages.

Gov. Beshear continues to urge Kentuckians to be cautious of rumors and depend on proven and good sources of news, including governor.ky.gov, kycovid19.ky.gov and the Governor’s official social media accounts Facebook, Twitter and YouTube.

The Mercer County Health Department’s clinic remains open, although staff are trying to handle more cases over the phone. Officials say they want to make sure vaccination schedules are still being followed, because the last thing anyone needs is an outbreak of a preventable disease like pertussis—also known as whooping cough—on top of the coronavirus outbreak.

Even though it’s relatively late in the flu season, Crown-Weber said she would still recommend for people to get the influenza vaccination.

“We would gladly get rid of more flu shots,” Crown-Weber said. For more information, visit online at health-mercercounty.ky.gov.