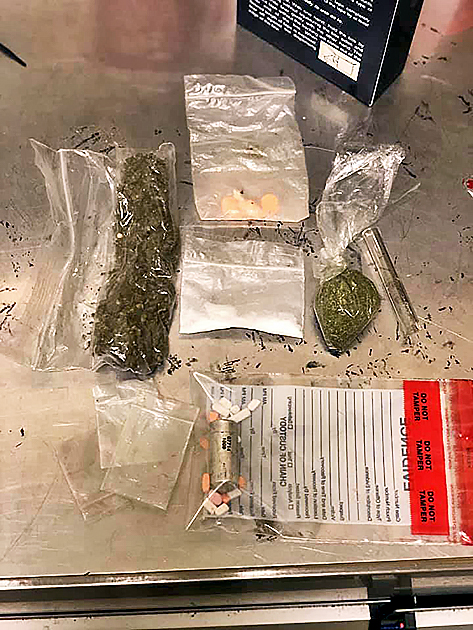 Two people were arrested after a traffic stop turned into a drug bust last week.

On Friday, Feb. 21, police stopped a vehicle for expired plates. According to a Facebook post by the Harrodsburg Police Department, a positive response from a drug-sniffing dog led police to search the vehicle as well as the driver and a passenger.

Officers found four grams of methamphetamine, 25 grams of marijuana, pills and drug paraphernalia. Police also found an assortment of pills, including Xanax, on the passenger, who was identified as Carl Brent Helton, 39, of Harrodsburg.

According to the Boyle County Detention Center website, Helton was arrested and charged with 1st-degree trafficking in methamphetamine, trafficking in marijuana, possession of drug paraphernalia and 3rd-degree possession of an unspecified controlled substance. He is being held on a $12,000 bond at BCDC.

The driver, Sarah D. Jones, 37, of Harrodsburg, was arrested and charged with no registration plates, failure of non-owner-operator to maintain insurance, failure to produce an insurance card, 1st-degree possession of heroin, possession of drug paraphernalia and possession of marijuana. She posted a $12,000 bond and was released.

Patrolman Blake Darland of the Harrodsburg Police Department made the arrest, with assistance from Cpl. Derek Patterson and Patrolman Chase Hale.