Two women, including one from Mercer County, face multiple counts of animal cruelty.

Last week, Melanie Logue, 47, of 178 Talmage-Mayo Road, was charged with 18 counts of second-degree animal cruelty and two counts of failure to dispose of carcasses within 48 hours.

According to the complaint warrant, officers from the Boyle County Animal Control Office and the Kentucky Department of Agriculture discovered 16 horses in poor health on property Logue was leasing. One of the horses was in “such poor condition that the animal had to be euthanized,” according to the complaint. Investigators also found two additional horse carcasses which “appeared to have been present for greater than 48 hours.”

The situation in Boyle County has triggered a case of deja vu for officials here in Mercer County. In June 2016, officials discovered 43 severely neglected horses belonging to Charles and Maria Borell on a farm they leased here.

Charles Borell entered an Alford plea of guilty to nine counts of 2nd-degree animal cruelty in September of that year. Borell’s daughter Maria fled Kentucky rather than face the charges against her. In 2017, Kentucky enacted the Borell law, allowing courts to order people convicted of animal cruelty to pay restitution for the upkeep of neglected horses and terminate their ownership of the animals. However, not all defendants have the means to pay.

At Tuesday’s meeting of the Mercer County Fiscal Court, County Attorney Ted Dean said cases like the Borells had forced Sheriff Ernie Kelty and his deputies to go “above and beyond” the call of duty.

Not only has the sheriff’s office had to investigate animal cruelty cases, they very often have to find ways to provide care to animals as well.

“The role of a sheriff’s office is not to take on that kind of time-consuming duty,” Dean said. “It’s above and beyond dogs running around without a leash and kitty cats stuck up trees.”

“We can add job duties, but we’ve got to have the mechanism and the resources,” Dean said.

“That is becoming a problem,” the sheriff said. “We have no way to move horses or anywhere to put them. It puts our office and the animal shelter in a huge bind. We just don’t have the capability.”

County officials have still not reached a final solution on disposing of dead livestock. Mercer County, along with 17 other counties were left scrambling for a solution when a Winchester-based recycling facility went out of business earlier this year.

Most counties have provided the service as a benefit to farmers and to public health. Boyle Fiscal Court voted to suspend the service until they could find another company, according to the Danville Advocate-Messenger.

Mercer County Judge-Executive Milward Dedman said the county is still looking for a way to resume the service. 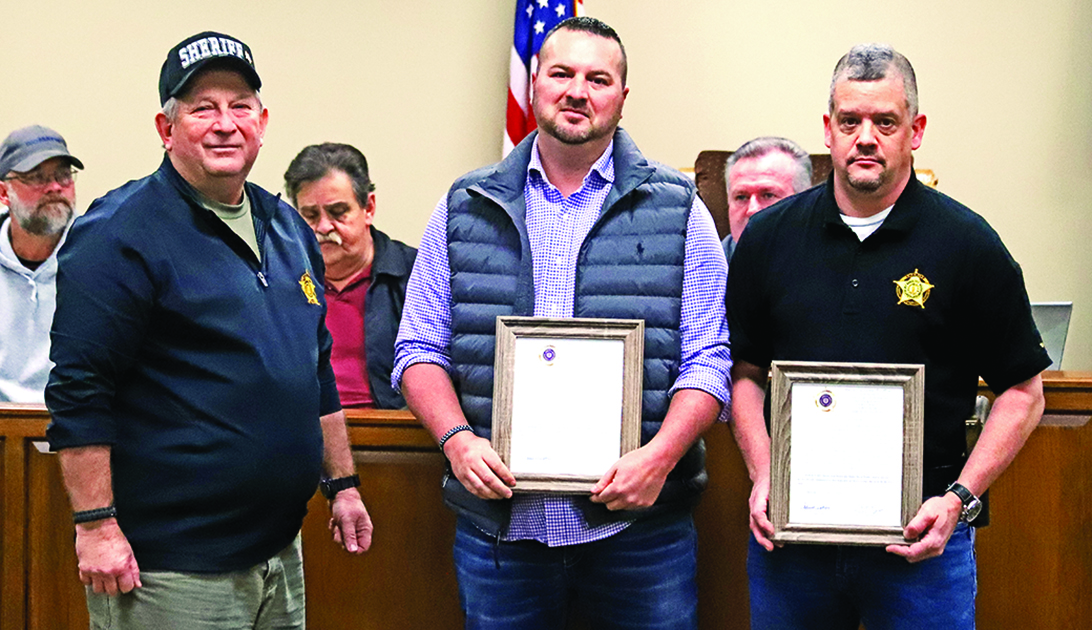 Sheriff Ernie Kelty presents commendations to Deputies Sean Brown and David Prather for the courage they displayed during the Jan. 19 accident that killed the parents of a seven month old child.

In other business, the Mercer County Fiscal Court Recognized Deputies Sean Brown and David Prather for the courage they showed during a Jan. 19 accident.

Judge Dedman announced all budget requests are due by Friday, March 13, at 4 p.m. The next meeting of the Mercer County Fiscal Court will be on Tuesday, March 11, at 10 a.m.