Begley: “I feel the time is right to hand this off to someone else” 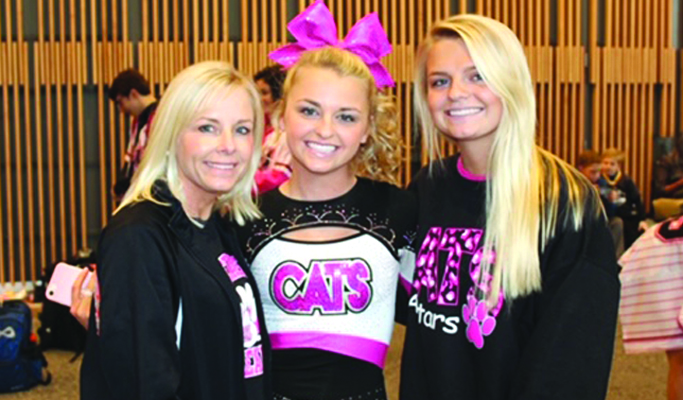 Allison Begley (left), and her daughters, Molly and Elle, have cheered all their lives under the direction of their mother. (photo submitted by Allison Begley)

After over 25 years of helping young aspiring cheerleaders and gymnasts in Harrodsburg, Allison’s CheerNastics will be closing its doors.

Starting on Wednesday, April 1, CheerNastics will make the transition to Cheerville, which is originally based out of Bowling Green.

Allison Begley, founder of CheerNastics, talked about the transition and the sale of her company.

“This will be Cheerville’s fifth competitive cheer gym with two additional gyms coming soon,” Begley said in a press release. “I will still be involved weekly at the facility, but selling the business at this time will provide me more time with my family.”

According to Begley, Cheerville has big plans that include a 6,000 square foot facility. Cheerville will have five to seven competitive cheer teams for all ages.

With her eldest daughter, Elle, in college, and youngest  daughter, Molly, set to graduate this May, Begley sighted that as one of the main reasons for the sale.

“I have enjoyed this immensely as my own two daughters started at 18 months old and cheered competitively until they turned 18,” said Begley. “I felt like this was the right time to hand this off to someone else.”

Begley reflected on the CheerNastics era.

“The fact I was able to take skills that I learned at an early age and turn that into a successful business for over 25 years is what I am most proud of,” she said.

Back in 1994, Begley started her business on Main Street and grew it to what it is today.

“I enjoyed every minute of it along the way and that makes all of this bittersweet,” said Begley. “I love that both of my daughters grew up in this gym. We had kids from all the surrounding counties come here to be on these all-star teams. Due to our success, we had instant name recognition in any competition we competed in around the state.”

Along with the additional 3,000 square feet, the facility will have an additional 40×40 spring floor, tumble track and various other equipment.

“I think this is something great for the community as more and more people will be bringing their children here for cheerleading instruction,” said Begley.

A former UK cheerleader, Madeleine Alviar, has worked with Begley for four years and will be the new gym manager.

“She has a great relationship with all the kids and this is just a really exciting time for our community,” said Begley.

Cheerleading has been in the family business way before the founding of CheerNastics. Begley cheered for the University of Kentucky men’s basketball and football teams in 1994. Shortly after graduating was when CheerNastics came into fruition, and has seen thousands of boys and girls some through their doors.

“I want to thank Mercer County and the surrounding counties for supporting my business,” she said. “I have been blessed to have great kids, parental support and great assistant coaches.”