Jaden Hardy is the No. 1 combo guard in the 2021 recruiting rankings and perhaps the best shooter in that recruiting group. However, there’s another given about Hardy — he never quits playing hard no matter the score.

“That’s the thing about him. He never gets upset with his teammates. He is a good leader. That’s what he does. He just plays,” said Coronado High School (Nev.) coach Jeff Kaufman. “He always looks to make the pass even though we sometimes don’t catch a bunch of them but he never lets that take away from the effort he plays with.”

The 6-5, 190-pound Hardy is a consensus top 10 players in the 2021 recruiting class and coaches, including Kentucky’s John Calipari, love his shooting and motor.

It’s the same approach to he takes if he has a rare off game shooting.

“I keep shooting. I have big faith in my shots. If you don’t, you will never make shots,”  Hardy said.

The 2021 recruiting class is not overloaded with combo guards, one reason Calipari offered Hardy a scholarship in September to make sure he knew he was a recruiting priority for the Cats. When UK played two games in Las Vegas before Christmas, Kentucky practiced at Hardy’s high school. He also came to watch UK play when it lost to Utah in Las Vegas.

“It was nice to see them and how they run their practices when they came to our school. It was a good experience for me,” Hardy said.

He’s watched UK play often on TV but took a break from the Tarkanian Classic to see the Cats in person.

“I just wanted to see a game in person,” he said. “They played really hard but just didn’t win. It was a nice atmosphere to see how many fans there were out here to watch them play, too.”

Kaufman said all his players enjoyed getting to watch UK practice and it was also good for him to see how the UK coaches ran practice.

“It was good for our kids to see them warm up, go hard, talk and do all the things they do and watch coach Cal coach and getting to talk to him and say hi to him was great for our kids,” Kaufman said. “Jaden enjoyed it, too. He knows some of those guys so it was great for him to talk to them and be part of that community.

“There were a bunch of Kentucky fans that showed up at high school to watch practice. That was cool. Some Kentucky fans did come to watch us (in the Tarkanian Classic), too.”

Hardy might guard any position for Coronado because Kaufman says he “wants to stop people” and help his team.

“He is a great rebounder. He has a great body and is in the weight room a lot,” the coach said. “We use him at lot at the 1 (point guard) because he can really make some great passes and he also has the ability to get by people. If you don’t back off him, he will go by you. If you back off, he can shoot over you. He’s really good in transition, too. If you run, and the Wildcats like to run, he will get you the ball or he will score.”

Hardy has about 25 scholarship offers and interest from a lot of other schools indicating more offers will be coming, especially if he continues to play at the level he has recently.

Hardy says he’s looking for a “winning program and coach that will push him” so he can reach the next level.

Kaufman says there’s no recruiting pressure on Hardy midway of his junior season.

“He’s not taken any official visits,” Kaufman said. “He likes the attention but handles it very humbly and very respectfully. He is nice to everybody.

“He’s considering all his options. He has not said I would never go there or this is the greatest thing I have seen. He is respectful to everybody and listens and learns the history. That’s the kind of kid he is.”

Hardy admits he likes Kentucky, something national recruiting analysts are in agreement about.

“I like them a lot. I just like the way they play. He (Calipari) lets guys go out there and play. That’s something I definitely like,” Hardy said. 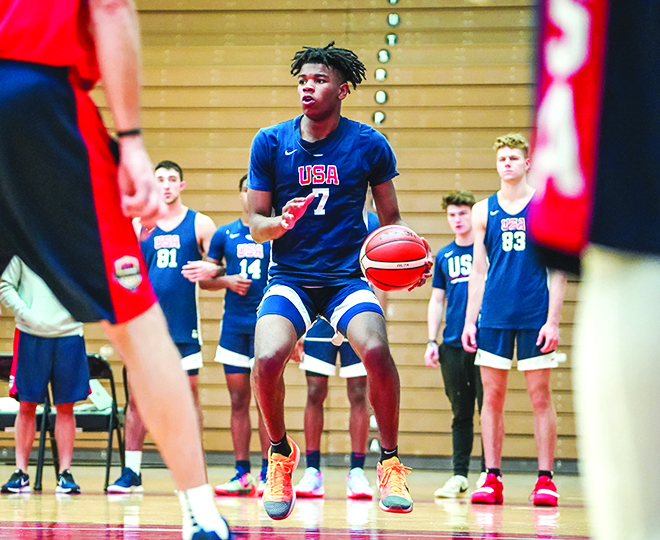 Jaden Hardy is the top combo guard in the 2021 recruiting class and admits he likes Kentucky — and UK coach John Calipari likes him a lot, too. (USA Basketball Photo)

If you are looking for another reason to be excited about Lexington Catholic quarterback Beau Allen being part of UK’s 2020 signing class, let recruiting director Vince Marrow give you one.

Allen, a top 500 player in the 247Sports rankings and the No 19 pro-style quarterback, gave his blessing for UK coaches to purse Auburn transfer Joey Gatewood — the No. 3 dual-threat quarterback in the 2018 class and 26th player overall.

Allen was an early commitment to UK and Marrow said the coaches felt they needed to talk to him before pursuing Gatewood after his decision to leave Auburn.

“That is respect we have for Beau but I have even more respect now for Beau because of the way he responded and kept responding,” Marrow said. “If he had not given his blessing I am not saying we would not go against it but having his blessing played a big part.

“We really wanted Beau’s input. Like any competitor, he said, ‘Bring him in. I want to compete.’ I knew he was a leader. He’s a smart and tough kid, the kind of kid you want at quarterback.”

Gatewood redshirted at Auburn in 2018 and played in eight games in 2019 passing for 54 yards and two touchdowns and running for 176 yards and three scores. He will have two years of eligibility remaining in 2021 and 2022 after sitting out the 2020 season.

“Joey is a big kid. He is one of those guys you just can’t pass on but it made it a lot easier when Beau said go ahead and get him if you can,” Marrow said. 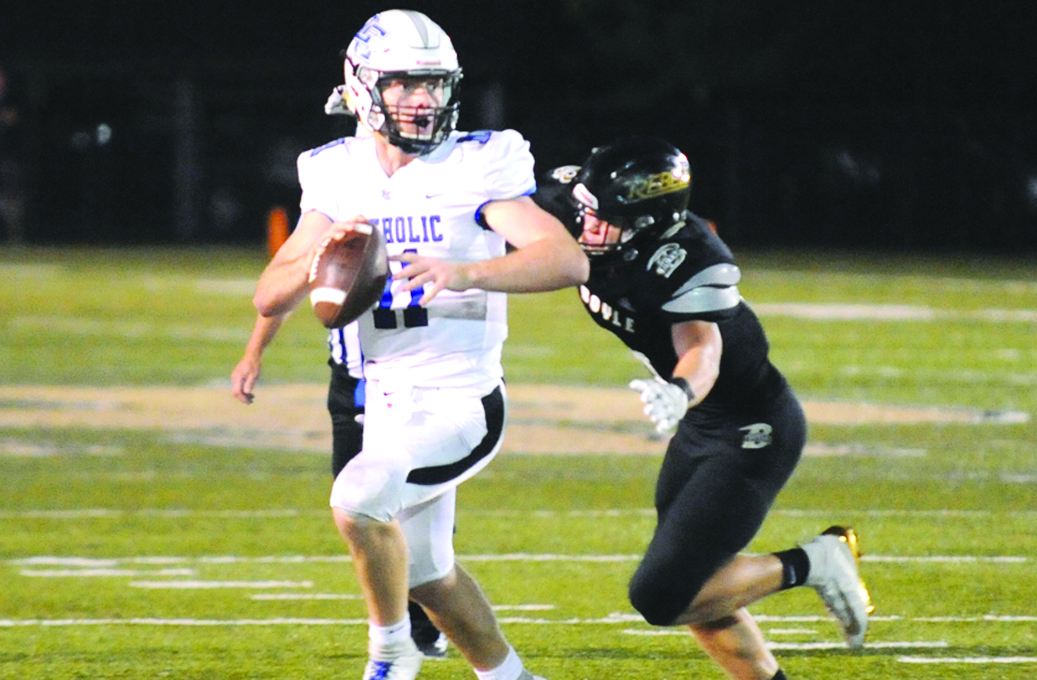 Dream City Christian (Ariz.) guard MarJon Beauchamp has already declared that in June he will start training for the 2021 NBA Draft in San Francisco with trainer Frank Matrisciano and also get training from former NBA coaches.

He had plenty of college scholarship offers, but the 6-6 guard just decided this was the best path for him to make the NBA.

“I have talked to a couple of top players about it and they are thinking about it (this year). I think I am starting a trend and more people will be coming into it,” Beauchamp said.

He did not have a Kentucky offer but he knows plenty about the UK basketball program.

That includes 6-11 Alex Tchikou, a top 25 player in the 2021 class who plays for Dream City also. He’s from France and didn’t start playing basketball until age 14 because he had always played soccer.

“I have heard of Kentucky basketball and I am interested in them but they have never really reached out to me,” Tchikou, who played at the McCracken County Mustang Madness and Marshall County Hoopfest both this season, said. “I definitely follow them and like coach (John) Calipari’s mentality. I am just waiting for them to reach out to me.”

Kentucky coaches may have reached out to his coach and Tchikou says he would “definitely” like to hear from UK himself.

“When I came to the U.S. for the first time I had a list of schools that I wanted them to offer (me a scholarship). I pretty much have everybody I wanted. I am just missing Kentucky,” he said. “I have another year in high school but I am still open for recruiting. I definitely have some schools that have set the tone and really interested in me but Kentucky is a school I want to hear from.” 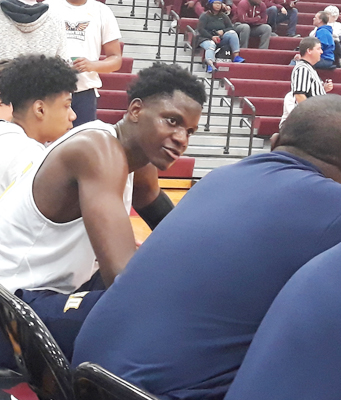 Alex Tchikou, a 6-11 junior, grew up in France and only started playing basketball at age 14 but he knows enough about college basketball to hope he can get a Kentucky scholarship offer. (Larry Vaught Photo)

Auburn had won all 15 games this season going into Tuesday’s game at Alabama and coach Bruce Pearl said the feeling from reaching the 2019 Final Four would “never” wear off at Auburn.

“At places like Kentucky it will wear off. At  Auburn it will last a long time. I was going to say Final Fours are few and far between but there has never been one (at Auburn),” Pearl said. “We will always appreciate it but we have moved on from the Final Four as far as our team and what we are trying to get done this year.”

He does admit the culture and work ethic from the Final Four team carried over and added some confidence to this year’s team which had some close early games it could have lost.

“We are not as good as we were a year ago but we have a chance to be a pretty good team still,” Pearl said. “We are different this year but I like my group a lot.

“I look forward to practice daily and every day I leave thinking we got a lot done but we still have a long way to go. Of course, we did at this time last year, too.”

With the way she’s playing, it’s impossible for sophomore Rhyne Howard not to be the headline-maker and center of attention for the Kentucky women’s basketball team.

She tied a school record with 43 points at Alabama last week one game after putting in 37 against Tennessee. She’s had five straight games with 25 or more points, something no UK player had ever done, before getting 22 at Florida Sunday after having only four at halftime because the Gators wisely focused their defense on her. She had made at least one 3-pointer in 17 straight games before failing to hit one against the Gators.

However, UK coach Matthew Mitchell said there is “no jealousy whatsoever” by teammates toward Howard, who has 906 points in 48 games.

“We understand who we are this year and what we have to be this year. The thing we all have to realize – coaches, players, Rhyne Howard and her teammates – is that she is going to get a lot of attention in the press and she deserves it,” Mitchell said.

“She is a phenomenal player. But we cannot let that divert our focus from the overall objective, and that’s winning games for Kentucky. I think they’re doing a great job of that right now. It’s sincere, it’s genuine, and as long as we stay that way, we will continue to progress as a team.”

That happened Sunday at Florida when UK had to show it could win without Howard dominating – even though for most players 22 points would be a dominant outing. She also had six rebounds, one block and one assist in the Florida win to justify Mitchell’s belief in her team first attitude.

Quote of the Week 3: “This team is nowhere like the team they had in 2015. But in a season where there are no powerful juggernauts, this team has a chance (to be in the national title chase),” ESPN analyst Jay Bilas on John Calipari’s team.