Park Closed Until Wall Is Repaired 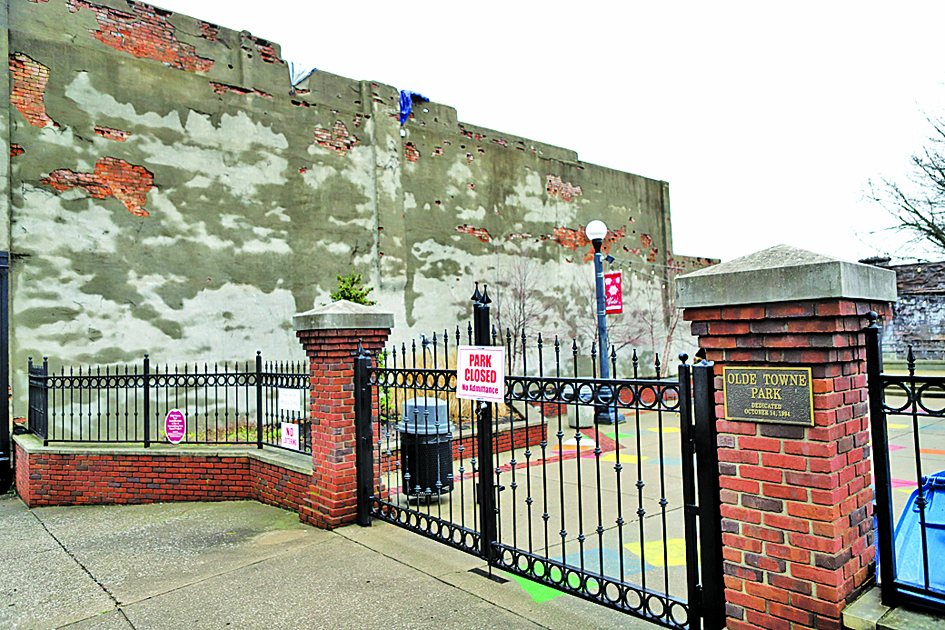 Olde Towne Park on Main Street is closed until the wall at La Fonda Mexican Restaurant is repaired.

According to Mayor Art Freeman, the park was closed after the wall at La Fonda Mexican Restaurant was condemned. The 24-inch thick wall was damaged when city workers removed creeping ivy planted when Olde Towne Park was built in 1994. In 2015, Rafael Ayala, the owner of La Fonda, told the Harrodsburg Herald that the vines tore away the building’s facade and damaged his roof.

However, it wasn’t just the vines that damaged the building. The wall overlooking the park was not built to be an exterior wall. When the building was torn down to make way for the park, the wall was stuccoed instead of being reinforced.

“We’re not going to open that park back up until they get that roof fixed,” Freeman said Monday night at the Harrodsburg City Commission meeting. Freeman also asked the commissioners to agree to paying half the costs of repairing the wall. He said if someone were injured at the park from falling masonry from the wall, the city would be held responsible along with Ayala.

“We’re going to be as liable as anybody,” Freeman said.

The commission voted to pay half the costs to repair the wall. Freeman said there were differing estimates of how much it would cost, anywhere from $15,000 to $25,000.

The park was opened in 1994. In recent years, it has become an outside venue for the city, where concerts are held. During Oktoberfest, the park holds the fest haus and games. It was decorated by members of the Harrodsburg First Main Street Program’s design committee and by Mercer Central High School students to look like Candyland for the most recent Christmas parade. Until the decorations were removed, Freeman said he never passed the park over the holidays that people weren’t playing there.

“We don’t need people in that park until we get it fixed,” Freeman said.

Ayala could not be reached for comment before press time. It is not clear when the wall will be repaired.

• Voted to adopt a nonbinding resolution to support the second amendment of the U.S. Constitution.

Courtney Griffieth of Mercer United, who asked for the resolution, called it a “reaffirmation” of the community’s commitment to the right of people to keep and bear arms.

• Gave first reading to a zoning amendment ordinance changing property owned by Priorities LLC and Tim and Crystal Darland located at  Pine Hurst Way from B-3 (business) to R-2 (residential).

The commissioners also gave first reading to a proposed text amendment to the city’s planning and zoning ordinances which Sean Moore, executive director of Harrodsburg-Mercer County Planning and Zoning Commission, said corrected the city’s sign ordinance, which had been invalidated by a Supreme Court ruling.

Once approved, planning and zoning will issue a new book. The commissioners will look over the revisions before giving the amendment a second reading at the next meeting.

• Heard from Vance Smith, president of Mercer Area Family Education and Wellness (MAFEW, which was formerly the YMCA).

Smith said MAFEW would like to add a playground on an empty spot next to the building. Smith and MAFEW CEO Debbie Pierce said they were hoping to use grant money to build the playground. Until it’s finished, Pierce said they will hold “walking field trips” to Old Fort Harrod State Park.

Smith and Pierce also told the commission that MAFEW was in the middle of a membership drive. The organization is also offering partnerships that cost $75 per household, $50 per adult (26-64), and $30 for seniors (age 65 and over) and young adults (19-25). In addition to supporting MAFEW programs—which include biddy sports, youth basketball, women’s volleyball, karate classes, summer camp and preschool programming—partners also receive a 10-percent discount for membership at McDowell Wellness Center, waiver of basketball fees when the gym is not in use, discount on facility rentals and fees.

“If we had a thousand people we could do so much for the kids in this community,” Pierce said.

Smith also told the commission that pancake day will be held Friday, Feb. 7,  from 6 a.m to 8 p.m. at Lions Park Community Center.

• Hired Jonathan Hale for the Harrodsburg Police Department at $13.50 per hour effective Jan. 14.

• Approved adjusting a water bill for a customer who had a leak.

In addition, Commissioner Jack Coleman asked the mayor to assemble a group to create an application to put Harrodsburg  on the HGTV series, “Home Town Takeover,” which will air in 2021.

The series will center on the efforts of Ben and Erin Napier, who host the series “Hometown,” to renovate  a community. The deadline for applications is Feb. 4, Coleman said.

“It’s worth a shot,” he said, especially with the city’s 250th birthday coming up in 2024.  Members of Harrodsburg First, the Harrodsburg-Mercer County Tourist Commission and the James Harrod Trust will work with Freeman to draft the application.