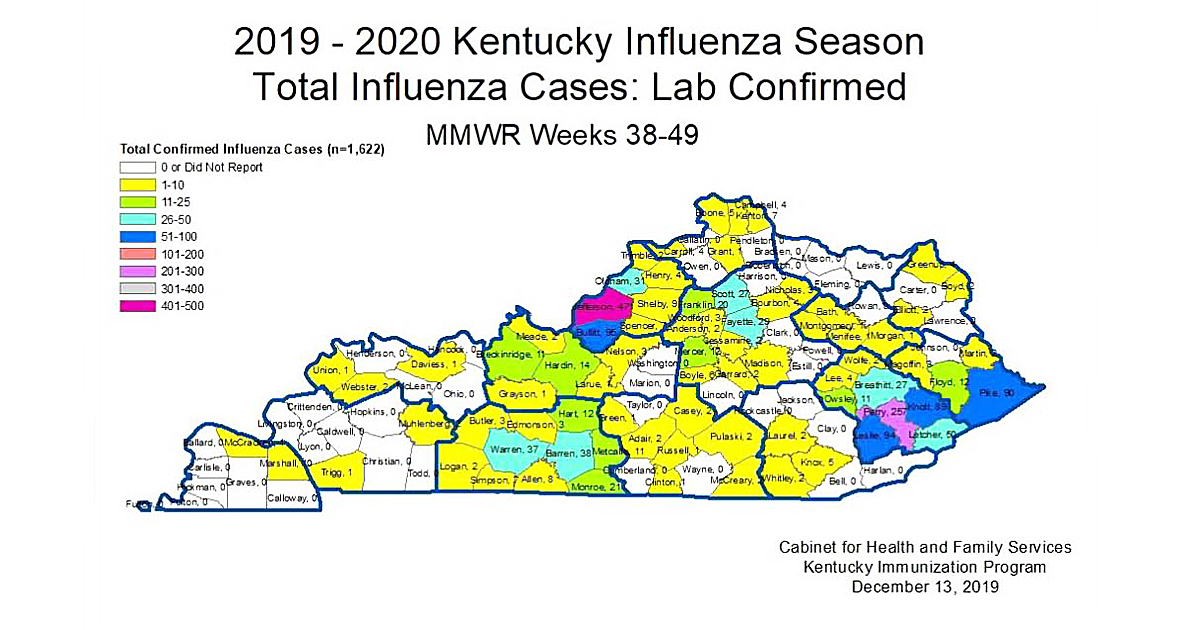 Since August, there have been 12 confirmed cases of influenza here in Mercer County, with seven of them reported between Dec. 1–7.

The holidays are here, and an unusual visitor is able to enter our homes at will and leave many of us with a gift whether we’re naughty or nice. We’re not talking about Santa Claus. We’re talking about the flu.

Since Aug. 4, there have  been 1,622 laboratory-confirmed cases of influenza across Kentucky, including 12 here in Mercer County. According to the Department for Public Health, there have been four flu-related deaths so far this season.

Kathy Crown-Weber, director of the Mercer County Health Department, said the number of people currently suffering from the flu is probably higher than the official statistics, which rely on voluntary reports from healthcare providers. Many people suffering from the flu never have their diagnosis confirmed by testing at the state lab.

She encourages the public to get vaccinated against the disease, especially children and adults at high risk for complications related to the flu. The health department offers flu shots for $25.

In recent years, some have questioned the efficacy of getting the flu shot.

“The Centers for Disease Control and Prevention  take what was going around last year and they base the new flu shot on what went around. If there is a switch, on occasion they will miss it,” Crown-Weber explained.

She said it’s pretty simple. If you don’t want to get the flu, get the shot.

“I’ve had my flu shot because I don’t want to get the flu,” Crown-Weber said.

Getting the shot is vital if this year’s flu season proves to be as long-lasting as last year’s. According to the CDC, more than 647,000 flu-related hospitalizations occurred and more than 61,000 people died. In Kentucky, there were 196 flu-related deaths, including two of children.

What else can we do to prevent the spread of the flu?

But the people who can do the most to prevent the spread of the flu are the people who have already gotten sick. For people suffering from the flu, Crown-Weber has this advice: stay home.

While wearing masks and gloves and coughing into your elbow—something older people, who were raised to cough into their hands, struggle with—the best way to stop spreading the disease is to avoid contact with others.

Infection with the flu virus can cause fever, headache, cough, sore throat, runny nose, sneezing and body aches. Flu can be very contagious. It takes about two weeks for the vaccine to become fully effective, so it is very important to get the flu shot as soon as possible.

Who Needs A Flu Shot?

The CDC Advisory Committee on Immunization Practices recommends flu shots for all individuals six months of age and older. People strongly encouraged to receive the flu vaccine because they may be at higher risk for complications include:

• Women who are or will be pregnant during the influenza season.

• Persons with extreme obesity (Body Mass Index of 40 or greater).

• Residents of nursing homes and other long-term care facilities.

• Household contacts (including children) and caregivers or people who live with a person at high-risk for complications from the flu.

• Health care workers, including physicians, nurses, and other workers in inpatient and outpatient-care settings, medical emergency-response workers (paramedics and emergency medical technicians), employees of nursing home and long-term care   facilities who have contact with patients or residents and students in these professions   who will have contact with patients.

It is especially important for pregnant women to be vaccinated before or during pregnancy. Antibodies cross the placenta and provide immunity to infants up to 6 months of age, when the infant is eligible to receive their first annual dose of flu vaccine. Last season in Kentucky, there were infants less than one month old that had the flu.

The state’s weekly flu report is posted online at https://healthalerts.ky.gov/Pages/FluActivity.aspx and https://chfs.ky.gov/agencies/dph/dehp/idb/Pages/influenza.aspx. The report will be updated each Friday.

To get a flu shot from the Mercer County Health Department, call 734-4522.