Lewis signs with University of the Cumberlands 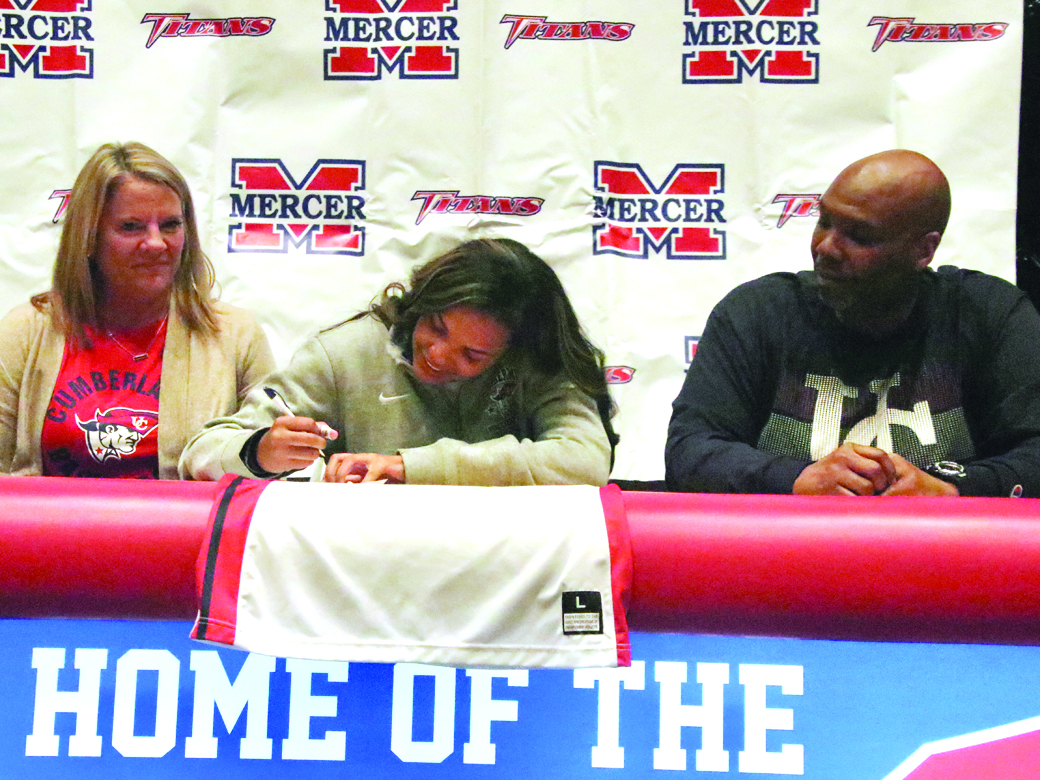 Mercer County senior Channing Lewis (middle) signs her letter of intent to play for the University of the Cumberlands women’s basketball team on Friday, Nov. 8, in the Mercer County Senior High School auditorium. She is accompanied by her parents, Amanda and Keith Lewis. (photo by Arpan Dixit)

The Mercer County Lady Titans basketball program has had a remarkable five-year stretch.

In those five years, two state championships were won, along with four 12th Region titles and many playing scholarships earned. Add another one to the list.

Senior Channing Lewis, who was a key member of the 2017 and 2018 state title teams off the bench, signed a letter of intent to further her academic and athletic career at the University of the Cumberlands in Williamsburg.

Lewis is expected to not only be one of the top scorers and facilitators on her team, but the entire region as well.

Mercer County Lady Titans Head Coach Hayley Spivey enters her second season at the helm, but has coached Lewis since she was in middle school.

“She has had many accomplishments since she has been here. We’re very thankful for the time and effort Channing has put in to this program over the past several years and will continue to put in as her senior year progresses,” said Spivey. “She’s been with me since the beginning so it’s really emotional for me. I’m just thankful for all the time and effort she has put in for this program.”

Lewis said it was an easy choice to become a Patriot.

“The campus is beautiful and when I took a tour, it was easy to see that everyone that you encountered was happy to be on the campus,” she said. “The coaching staff and players were so welcoming. When I went to practice and started with prayer, that’s when I knew Cumberland was the place I wanted to be for the next four years.”

Lewis said being a part of a program where you have to work and earn playing time was where she wanted to be.

“I wanted to go to a school where I wasn’t treated like just another number and had a chance to compete for a national championship,” she said.

Lewis said constant contact with the UC coaching staff was very important throughout the recruiting process.

“The conversations with the coaching staff was something I really looked forward to. They always made it a priority to check up on me to see how I was doing and how my family was doing, which was very important to me,” said Lewis. “They just made it very apparent that they wanted me to come to UC.”

Lewis’ father, Keith Lewis, was emotional talking about his daughter and the journey she took to becoming a collegiate athlete.

“I would just like to thank everybody for the support that they’ve given Channing since she was little. She’s been playing basketball for a long time,” he said. “She’s always put in a whole lot of work so everything she’s gotten, she’s earned. This year, she rededicated her life to God and just watching her grow has been amazing the last few years. I’m just really proud of her.”

Lewis plans on majoring in business with a minor in communications.