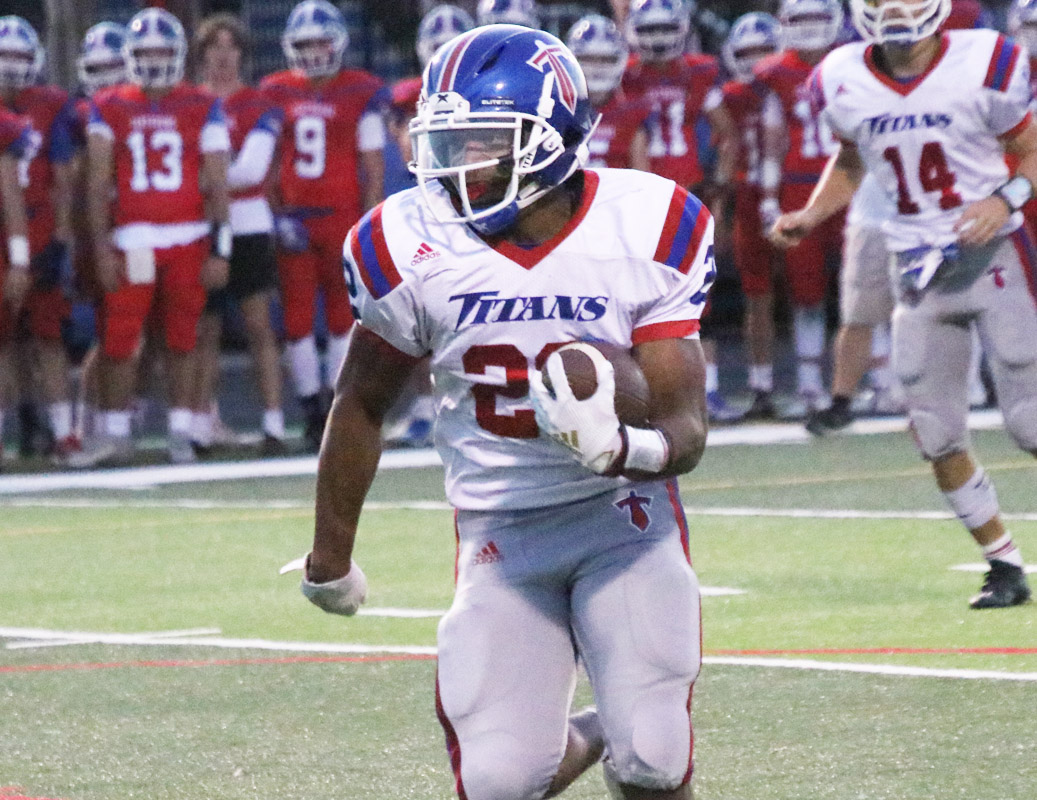 senior Malachi Yulee takes the hand-off from senior Kaelin Drakeford (14) on his way to one of his three rushing touchdowns against CAL on Friday, Sept. 27. (photo by Arpan Dixit)

Mercer County football (5-1) picked up their fifth win in their first six games with a 45-42 road victory over the Christian Academy of Louisville Centurions (3-3) on Friday, Sept. 27.

This is the best start the Titans have had in Head Coach David Buchanan’s five years at the helm.

The stat of the night came on the ground for Mercer County, totaling 420 rushing yards, led by senior Malachi Yulee’s 178 yards and three touchdowns on 13 carries. Sophomore Brayden Dunn was second on the team in yardage on the ground, with 84 yards on 14 carries. Senior Kaelin Drakeford ran it eight times for 64 yards and two goal line touchdowns. Senior Bryson Yeast carried the ball six times for 68 yards and senior Peyton Owens had eight carries for 26 yards.

Despite the running game being the topic of conversation after the game, Buchanan gave credit to his offensive lineman.

“We’ve got some good guys up front blocking for our running backs,” he said.

Yulee leads the team in rushing this season with 714 yards and eight touchdowns.

“Sometimes when things don’t click, his work in the weight room really pays off,” said Buchanan. “I think they’ve got some really good players, but I feel like we have better players and that’s what we have to hang our hat on is that we have a lot of good players and we have to use those guys and let them play to their strengths.”

The Titans got off to a good start. Senior Jamisen Lewis took the opening kick-off 52 yards to the CAL 35-yard line to set up Mercer County with great field position to start the game. After Drakeford picked up a first down on a keeper, Yulee took it six yards to the house for the first score of the game.

The Centurions saw what the Titans did to them on the first drive, and decided to do the same. CAL quarterback Anthony Sabatino completed a 62-yard pass to wide receiver Luke Leeper on the first play to set the Centurions up with first and goal from the 5-yard line. Sabatino ran it in from two yards out a few plays later. Senior Dillon Warren was able to block the extra point to maintain a 7-6 lead for the Titans.

After CAL forced a punt on Mercer County’s next possession, running back Brandt Babin scored on a seven yard run to make it 13-7 CAL, which would be the score at the end of the first quarter.

On the next Titan drive, Dunn broke off a 32-yard run down to the CAL 2-yard line, which led to a Drakeford rushing touchdown.

On the following kick-off, CAL’s Gage Geren took a squib kick 70 yards to the house to give CAL a 20-14 lead with just under 10 minutes left in the first half.

The next drive was Yeast’s turn to run the ball. He broke off a 39-yard run to the CAL one, which led to another Drakeford rushing touchdown from the 1-yard line to make the score 21-20 Mercer County.

The Titans kept that momentum on defense, forcing a fumble, which was recovered by junior Bryce Walton. On the following play, Yulee broke off a 74-yard run for the touchdown to give the Titans a 28-20 lead with 5:39 left in the first half.

On the following CAL drive, Drakeford intercepted Sabatino near midfield to set the Titans up with great field position again. Unfortunately, the drive ended with a Yulee fumble. CAL capitalized on the turnover, leading to a Sabatino to Leeper 44-yard score. The Centurions converted the two-point conversion to tie the game at 28.

Drakeford went 3-for-6 passing, for 90 yards and one touchdown.

The Titans took a 35-28 advantage to the locker room. That play was a big one because CAL received the second half kick-off and scored on a Sabatino 28-yard scamper to tie the game at 35.

The next Titan drive led to a 25-yard field goal by junior Noah Davis to give the Titans a 38-35 lead heading into the fourth quarter.

After the Titans jumped offside to give CAL an automatic first down on third and five, Yulee got rushed into the backfield and sacked Sabatino for a six-yard loss on the next set of downs. CAL went for it on fourth and 11, but Walton came up with another big defensive play, intercepting Sabatino to give the Titans the ball at the 35-yard line.

Yulee had two 20-plus yard runs on the next drive and ran it in from one yard out, his third rushing score of the game, to make the score 45-35 with 2:09 to play.

The game was far from over. Geron hauled in a 31-yard dart from Sabatino to cut the Titan lead to three, 45-42.

The Centurions went for the onside kick, but it was recovered by Dunn.

The Titans took a knee and improved their record to 5-1, earning a big district win on the road.

If there are defensive MVPs, Walton took home the honors, leading the team with 12 tackles and two takeaways.

The Titans will be back on the field this Friday, Oct. 4, when they host the Western Hills Wolverines at 7:30 p.m., for homecoming.

Homecoming night is extra special this year in Mercer County. The first coin that was tossed at the first Mercer County High School football game will be presented back to the school before the game by the class of ‘62. 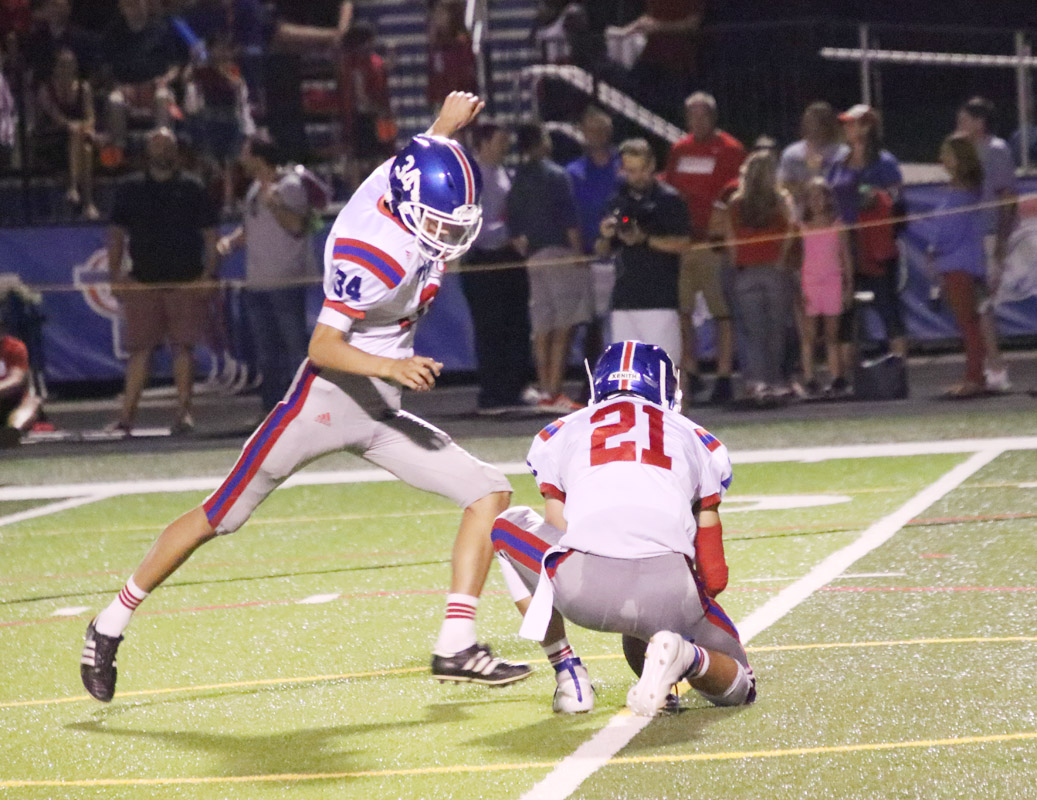 Junior Noah Davis (34) connects on a 25-yard field goal to give the Titans the lead in the second half. Senior Dillon Warren (21) was the holder. (photo by Arpan Dixit) 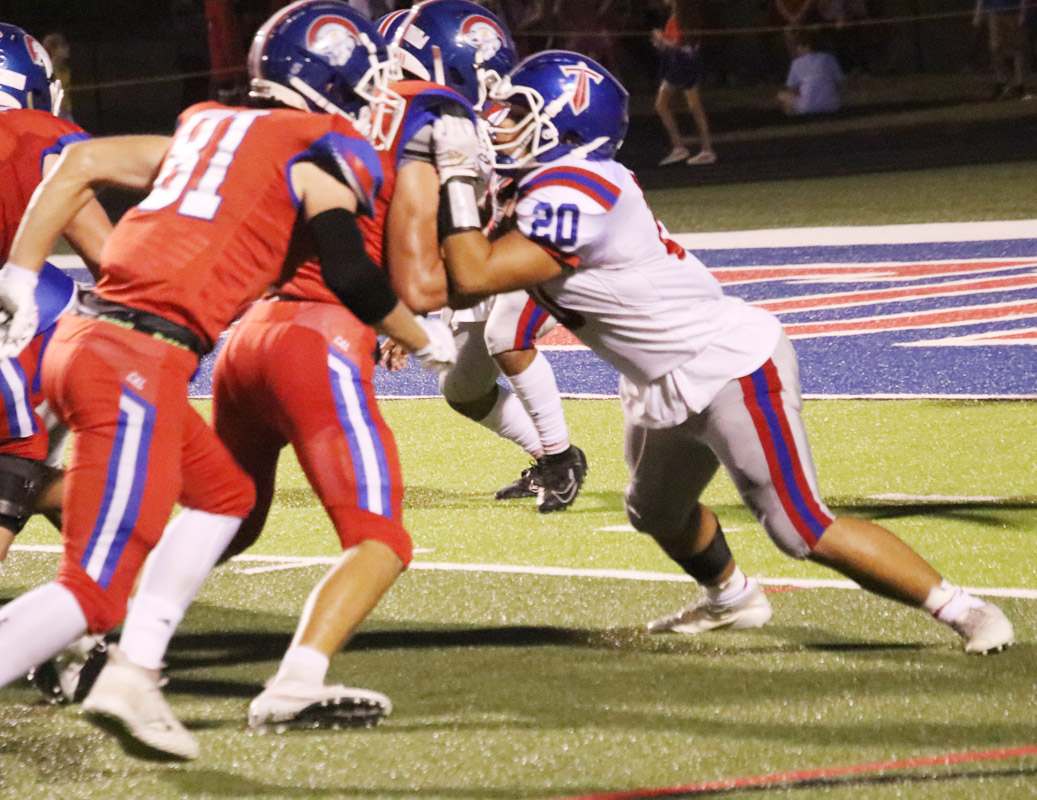 Senior Peyton Owens (20) holds his own on the defensive line against CAL on Friday, Sept. 27. (photo by Arpan Dixit)