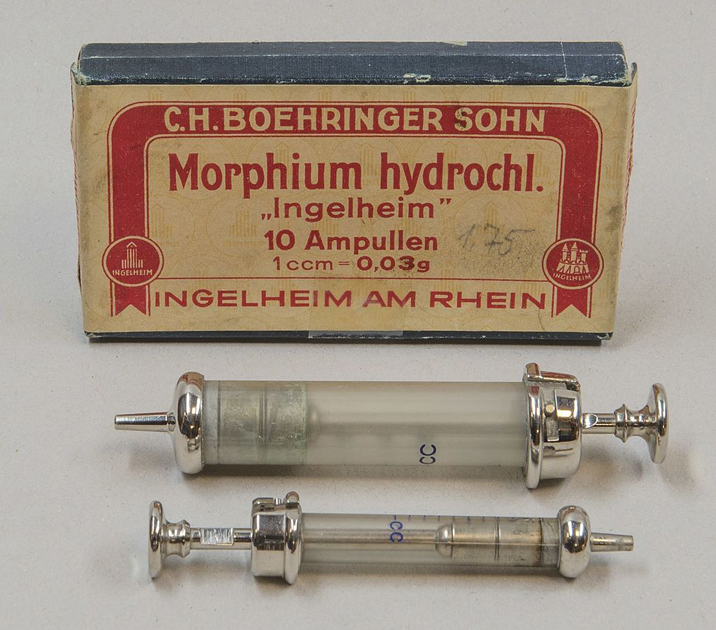 A morphium syringe dating back to the 1950s. Photo credit: Hannes Grobe (wikimediacommons.org).

“It’s been a long three years,” said Kathy Crown-Weber, director of the Mercer County Health Department, which runs the needle exchange. Crown-Weber said the program averages 25 exchanges a week. Since its creation, the exchange has dispensed 66,309 syringes, paid for with tobacco settlement money provided by the Kentucky Agency for Substance Abuse Policy, among other grants, not taxpayer dollars. No local funds have been used to pay for the program.

Participants have returned 46,981 syringes. The majority of them come from here in Mercer County, which was one of the first in Kentucky to create a needle exchange, which has served as a model for other counties. But there have been participants from as far away as Indiana, according to figures provided by the health department.

“Most of our folks are 31-40,” Crown-Weber said. There are two participants who are older than 61, both Vietnam vets, she said.

Crown-Weber said the University of Kentucky will run the exchange and will pay the health department to use their facilities.

The exchange has dispensed 140 Narcan kits, which are supplied by the state department of public health. This is one of the steps taken by state, federal and local governments which led to a reduction in deaths by overdose last year, the first decline in the number of deaths by overdose since 2013, according to the Kentucky Office of Drug Control Policy.

‘This has always been a harm reduction program,” Crown-Weber said.

Last week, they released a report showing that 1,333 people died from drug overdoses in 2018, down nearly 15-percent from a record 1,566 deaths in 2017. In 2018, the most dangerous drug was fentanyl, but the report also showed an increase in deaths attributed to methamphetamine.

Crown-Weber said she has seen an increase in methamphetamine usage among participants, who also abuse heroin, suboxone and cocaine. She said 150 have tested positive for hepatitis C, and have been referred to treatment at UK.

Sheriff Ernie Kelty said his office gets fewer calls about syringes, but it still happens. Kelty said he thinks people throwing out dirty syringes should be charged with wanton endangerment. The sheriff said dirty needles are frequently found in parking lots, public parks, subdivisions, along the road and in ditches.

“We find them just about anywhere you can think of,” Kelty said.

The next meeting of the Mercer County Fiscal Court will be Tuesday, Aug. 13, at 10 a.m.

About The Harm Reduction Syringe Exchange

Anonymous participants are given a code name and are eligible to exchange syringes, receive harm reduction counseling and referrals and free tests for HIV and Hepatitis C. Participants request confidential services—pregnancy testing, HIV and Hepatitis C confirmation testing, immunizations and other STD testing—must register with a name, address, phone number, and insurance information, among other information All participants must verbally agree to Rights and Responsibilities Statement which provides the guidelines for exchanging syringes, acceptable behavior at the health department and the health department’s obligation to call 911 if warranted.

Statistics as of June 28, 2019provided by the Mercer County Health Department.