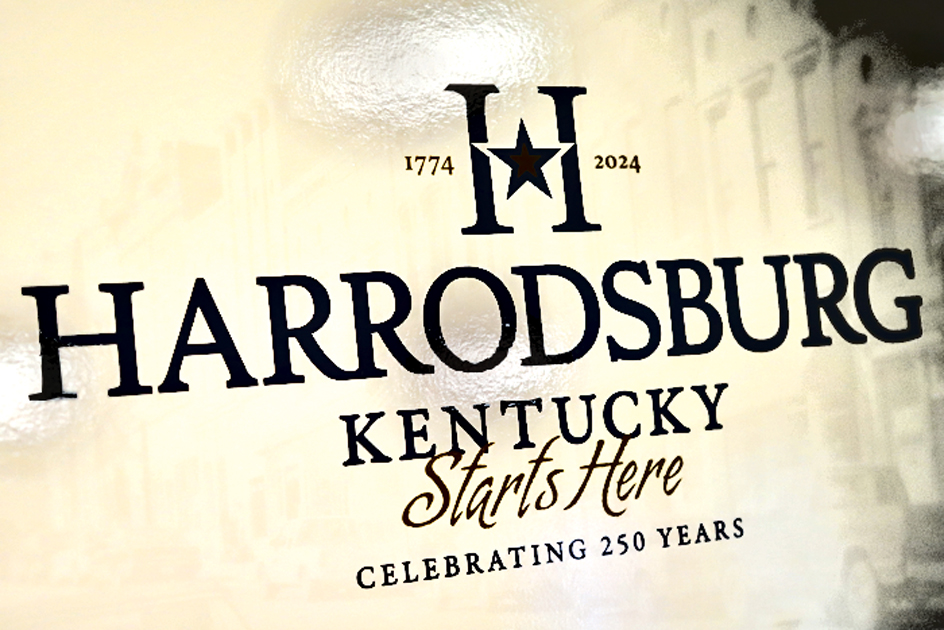 The Harrodsburg City Commission approved a new logo and slogan for the city on Monday night.

The City of Harrodsburg is rebranding itself.

Tony Dunbar, chairman of the Harrodsburg’s 250th birthday committee, presented the board of commissioners with a new logo and slogan at their meeting on Monday night.

“This is going to be one of the biggest things to hit Harrodsburg,” Dunbar said.

The committee was created back in April. “We saw an opportunity,” Dunbar said, “to put a whole new face on the City of Harrodsburg and the surrounding community.”

The committee asked Austin Dunbar of Durham Brand and Company in Covington, to create the logo. Austin Dunbar is Tony Dunbar’s son. He also works on branding for Budweiser, Fat Tire and Proctor and Gamble, among others.

While Austin Dunbar designed the logo, the slogan “Kentucky Starts Here” was dreamed up by local accountant Noel Turner.

Tony Dunbar said the anniversary committee presented the marketing plan to the Kentucky Tourism, Arts and Heritage Cabinet. Dunbar said the commonwealth, which will celebrate the 250th anniversary of its founding two years after Harrodsburg, is planning to piggyback off the city’s celebration. He said they will ask the governor to officially unveil the logo and slogan.

Referring back to the economic development plan recently compiled by Terri Bradshaw, which stresses the need for a unified marketing strategy for the community, Dunbar said it is key to start presenting a unified message. They’d like to plaster the new logo and slogan on police cars, water towers, street signs, t-shirts and whiskey bottles.

“This is going to take a community effort to pull off,” Dunbar said. “We’ve got to have the support of the entire community.”

“This is a good looking logo and it says what needs to be said,” Mayor Art Freeman said. Freeman said the city currently has six different logos. The mayor, who also attended a meeting of the Harrodsburg-Mercer County Tourist Commission to talk about the rebranding, said it was key for the city to move first. “We want the tourist commission to buy into this and they probably won’t buy into this until we do.”

The commissioners moved unanimously to approve the new logo. It is hoped Gov. Matt Bevin will officially roll out the new logo.

Dunbar said the anniversary committee is still working to acquire nonprofit status and are seeking support from the state as well as local industries in order to hold a solid year of celebrations, starting with the county fair in 2023 and working towards June 15-16 2024 with major events every month. “Five years seems like a long time but there’s so much work to do between now and then,” Dunbar said. “We’re going to showcase Harrodsburg like you wouldn’t believe.”

The next meeting will be Monday, Aug. 12, at 6 p.m. For more info on the 250th birthday celebration, email Harrodsburg250th@gmail.com.