At the last fiscal court meeting, Magistrate Tim Darland objected to the jail portion of the budget. Darland said he supported a 50-cent raise to jail staff on top of a 50-cent raise already approved in January, but he opposed giving a nearly $10,000 raise to Chief Dep. Chad Holderman.

Darland said several taxpayers had asked him about the raise and he asked Wofford about it.

Wofford justified the raise by saying the duties for the chief deputy jailer had expanded by adding duties formerly performed by Holderman when he served as the human resources officer. Wofford said Holderman was the only officer qualified to handle both jobs.

“He’s doing the job of two people and we only raised him 20-percent,” Wofford said. “That’s why his salary is where it’s at.” 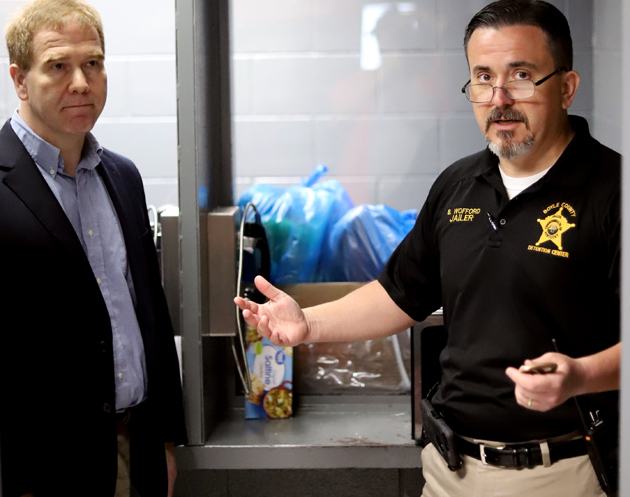 Mercer County Attorney Ted Dean and other officials were recently taken on a guided tour of the Boyle County Detention Center by Boyle Jailer Brian Wofford. Wofford appeared before the Mercer County Fiscal Court on Tuesday to discuss the regional jail’s budget.

He said Mercer’s percentage of the raise comes to $2,400. Wofford said if Holderman hadn’t received the raise, they would still pay him that much in overtime. Wofford said Holderman, who has extensive experience in corrections as well as the private sector, saves the counties money by aggressively pursuing discounts with vendors.

“He’s saved us a lot of money,” Wofford said. “He just saved us $1,100 on a washing machine and doubled the warranty.”

Magistrate Wayne Jackson, who, with Darland, voted against the budget at the last fiscal court hearing, asked if Boyle County has looked for state assistance or thought to institute a step program for all county employees. Mercer is currently working with Bluegrass Area Development District on a similar program.

Wofford said they are performing an employee review and are looking at training. He said they are working on a salary schedule for jail employees. But Boyle County’s fiscal court would have to approve it first, he said.

The jailer said it is hard to compete with Northpoint Training Center, which pays $15 an hour and hazardous pay and Aldi, which pays $12.50 an hour.

“That’s a problem all across law enforcement,” Kelty said, noting his office has had issues hiring and retaining bailiffs to work at the Mercer County Judicial Center.

Wofford also spoke about the expanded mental health services. He said 64-percent of inmates are taking a prescribed psychiatric medication when they entered jail.

Wofford is looking to hire a caseworker to make sure released inmates are getting help. He said much of the money to fund the initiative is coming from the canteen fund. In addition, Boyle is one of 16 counties receiving funds from an $87-million grant from the National Institutes of Health.

The jailer also stressed the potential savings of the initiative.

“If we lower our recidivism rate by 5-percent we’re saving money. If we break 10-percent, we’re making money,” Wofford said.

Mental health care will also be provided to state inmates, who have other avenues to get help. “I’m not going to refuse them,” said Wofford, who said county inmates come first. Keeping state inmates, who can be used for work details, will benefit both counties, he said.

He said the jail’s phone provider would pay $105,000 a year starting with the next budget year. Wofford said that is a $30,000 increase over what the jail was paid previously.

In addition, the fiscal court approved renewing the contract with Southern Health Partners for inmate medical services. The contract is based on having 270 inmates or less.

Wofford said the contract would save both counties money. He said his staff will begin tracking to make sure all positions are filled on holidays.

“If we’re paying for them, I expect them to be there,” Wofford said.

In other business, the Mercer County Fiscal Court announced James Whisenhunt of Bluegrass ADD will attend the next fiscal court meeting to address any questions on 911 address changes.

As many as 982 Mercer homes will have their 911 street addresses changed according to research conducted by Whisenhunt.

The change has been recommended by local first responders, who say it can be difficult responding to emergencies because many addresses do not correlate to their actual location on the street.

The next Mercer County Fiscal Court meeting will be on Tuesday, June 11, at 10 a.m.