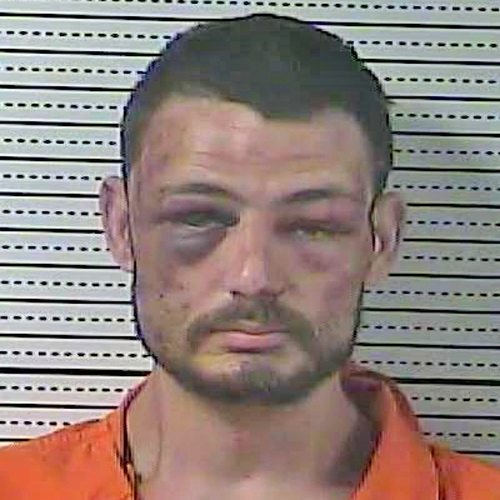 No officers were injured when a self-styled mixed martial artist decided to get an early start on celebrating Memorial Day. And in the end, Kenneth Burrows spent his three-day weekend in jail.

On Friday, May 24, at 9:14 a.m., the Harrodsburg Police Department received a complaint from Apple Market about a man riding a bike who appeared to be intoxicated. According to the uniform citation, when Patrolman Andrew Lay located the man, subsequently identified as Kenneth Alan Burrows, 30, of Harrodsburg, Burrows took off on his bike towards Larue Street, then headed back towards College Street. According to the citation, Burrows pedaled into oncoming traffic on College, causing cars to swerve in order to miss him, before turning down West Office Street, where Lay pulled in front of him.

At that point, Patrolman Aaron Steele deployed his Taser, knocking Burrows from his bike but not knocking the fight out of him.

According to the citation, Burrows, who is a mixed martial arts fighter, advanced towards Steele “in an aggressive manner.”

Both Lay and Steele tried to grab Burrows and all three fell to the ground, according to the citation. Burrows repeatedly struck both officers in the face and body, and Lay’s glasses were broken in the scuffle. According to the citation, Burrows also spit on Lay before the officers were able to subdue him, with additional assistance from Dep. Wes Gaddis of the Mercer County Sheriff’s Office, who arrived on the scene.

This is not Burrows’ first run in with local law enforcement. In March, it took nine people at Boyle County Detention Center to restrain Burrows, who was already handcuffed and had been Tasered twice.

Jail officials believe Burrows swallowed drugs while in custody. He also destroyed a hospital bed when he was taken for medical treatment and ended up being placed on life support, officials said.

While Patrolmen Lay and Steele were struck repeatedly, neither officer was seriously injured, according to Harrodsburg Police Chief Brian Allen.

Lay is the arresting officer, with assistance from Steele and Gaddis.