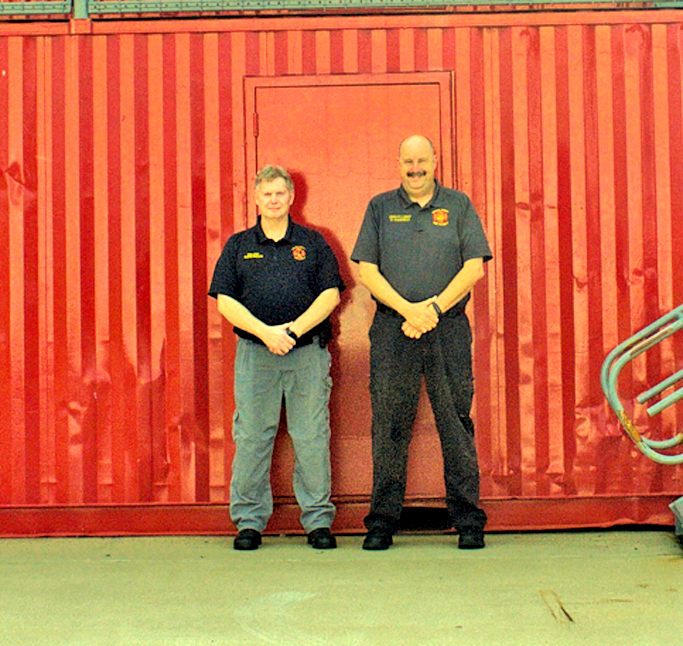 The Mercer County Fire Protection District was organized in 1986 and is governed by a seven-member board of trustees. The district operates eight fire stations located in Burgin, Cornishville, Harrodsburg, Salvisa, Dixville, Terrapin, McAfee and Shakertown.

“We have 145 volunteer firefighters who operate 30 pieces of fire and rescue apparatus,” he said. “In addition to providing essential firefighting services, our members also respond to vehicle accidents, medical emergencies, complex and high-angle rescues and hazardous materials spills.

A native of Mercer County and a former chief of Harrodsburg Fire Department, Phillips has been helping keep the county safe from fire since 1983. But he said medical issues are forcing him to step down.

“I will be limiting my role to advisory and administrative this June due to medical issues,” Phillips said.

No replacement has been named, said Deputy Chief Ric Maxfield.

“We have a lot of personnel in house qualified for the position of chief. Our board will decide, but the process won’t even start until June,” said Maxfield. “We will also announce the position for out of house applicants.”

Despite the changes in administration, Phillips and Maxfield still have goals for the district.

“I would like to see the insurance service office (ISO) fire score to go down to a four. Right now we are at a five-ten split,” said Phillips. “In order to get to a four we will have to increase training, get more equipment and improve our response time.”

In 2014, the district brought the county’s ISO score down to a five-ten split from a seven-ten split.

“We did our first audit in 20 years and our fellows worked extremely hard to drop those two points,” he said. “It is a very complicated process that took a lot of effort but in the end we saved homeowners hundreds of dollars.”

In order to improve the score, Phillips said it would be necessary to add at least one more station.

“We acquired some land out by Bruner’s Chapel Church,” Phillips said. “If we are able to put a sub station there it would give the county a 96-percent coverage rate.”

He hopes to see the new station up and working within two years.

In addition, Maxfield said he wanted to improve how district wide policies.

“I want to update, upgrade and improve our policies,” said Maxfield, who started with the station in Salvisa back in 1995. Also a former chief of the Harrodsburg Fire Department, he retired after 20 years of service. “I would like to see a policy in place fore every foreseeable situation to increase efficiency.”

Since 1986 a lot has changed, but both Phillips and Maxfield agreed the district’s top accomplishment was adding the training center located in McAfee.

“I cannot heap enough praise on the people who came together to build the training center,” said Phillips.

“The training center not only provides operational advancement and training for our firefighters, but it’s existence brings us closer to an ISO score of four,” said Maxfield.

Another major accomplishment was the merging of six independent stations in 2006.

“By merging the stations together we qualified for larger grant funds,” Phillips said. “I had a goal for $1 million in grants and to date I have reached over $900,000.”

“The merger was 13 years ago and we really have come a long,” said Maxfield. “Communications have improved so much. Dispatch, radios and meetings have put the groundwork in place to be effective in our communications and in turn it makes Mercer County safer.”

Phillips praised communication not only between stations but between all of Mercer’s agencies.

“It would be impossible to do what we do without all the agencies working together to provide a safe county,” said Phillips. “We are extremely proud of our health department. They are the best.”

Phillips said Mercer is unique in its effective communication between agencies.

“We really have the best group of people here working for the betterment of the community,” said Phillips. “Our board is amazing as well. They are genuinely concerned about what is best for the county.”

“We are always seeking volunteers,” he said Phillips.