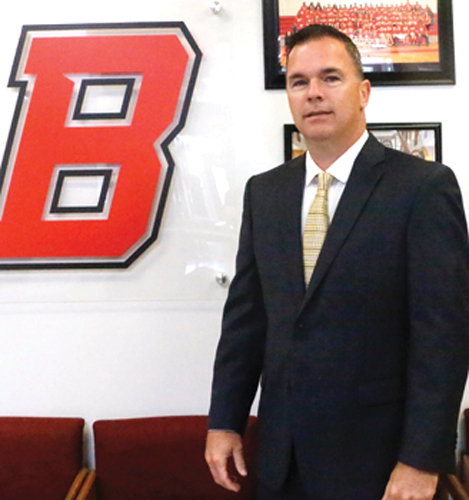 Burgin Independent Superintendent Will Begley praises the support the school receives from the community. “The parental support in this community is unmatched,” Begley said.

Will Begley has been superintendent of Burgin Independent School for two years. Originally from Lancaster, Begley has lived in Mercer County for 24 years.

“This is a great community.  I have always called Mercer County home,” said Begley.  “I have been lucky that I have been able to go after positions in the surrounding area, and not have to move.”

“This is a great time to be a bulldog,” said Begley. “We have accomplished so much here and are still going.”

Begley said the school has achieved many facility upgrades over the last two years and plans are in the works for an 11,000 square foot addition.

The addition will be placed on the west side of the school attached to the gym.

“The plans go to the board for approval this week,” said Begley. “We hope to hold a community show and tell of sorts as soon as they are approved.”

Begley said he hopes to break ground on the addition this coming fall.

“The parental support in this community is unmatched,” said Begley. “We have parents who completely revamped the baseball facilities. They received material funding from the board but all the labor was done by parents.”

Currently, there are plans for the University of Kentucky softball team to help Burgin’s softball field this summer due to a parent and Begley said the school’s new soccer team is also a parent-led initiative. Upgrades and reorganization have helped the school feel and look better, said Begley.

“The school has also  renovated a 1,500 square foot area to house a weight room,” the superintendent said. “We have our stage back and have been making big plans for graduation.”

Begley said this year’s graduation will be student focused.

“We want the ceremony to be about the students,” said Begley. “This year all of our graduates will be placed on the stage.”

Begley hopes the stage will also promote performing arts at Burgin next year. As for goals, Begley said he has two major initiatives planned for the 2019-2020 school year.

“We will be starting a financial incentive program for teachers based on student achievements,” said Begley.  “We hope it will help students achieve growth and meet their goals. The incentive program will be above their regular salary.”

The second goal is in conjunction with the new graduation requirements handed down from the state.

“We are creating the profile of a  Burgin graduate,” said Begley. “It will incorporate the graduation requirements in a new and user friendly manner.”

Begley said the new requirements are only half of the profile.

“We want to include public speaking, community service, financial literacy and resume building as Burgin requirements,” said Begley. “We want our kids to be prepared for both the workforce and college when they graduate.”

“I plan to stay as long as they will have me,” he said. “I like the closeknit, family atmosphere at Burgin. I think it allows for deeper relationships between students and staff.”