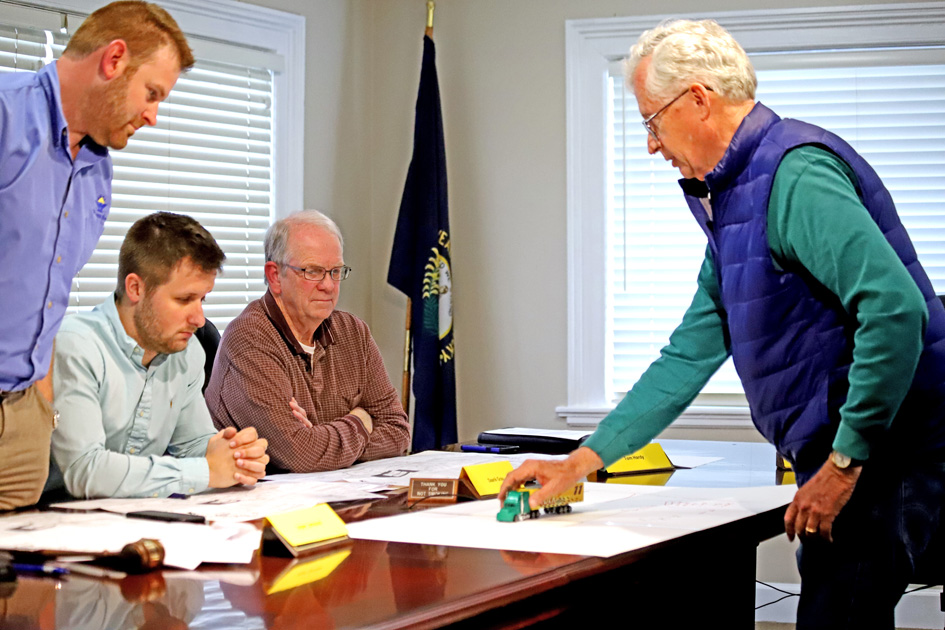 It’s round three for the lakeside Dollar General.

The Mercer County Joint Planning and Zoning Commission will hold a special called meeting on Tuesday, May 7, at 4 p.m. to discuss—for the third time—the rezoning of 2.33 acres in order to build a 9,100 square foot Dollar General Store.

The commission has considered the rezoning twice before, in March and April. Last month, they failed to either approve or deny a map amendment that would allow the store—which is located on property owned by Paul and Linda Barnes and is located at the intersection of Ashley Camp and Chimney Rock Roads—to be built.

Planning and zoning meetings are generally sparsely attended, but at the first meeting in March, over a dozen people spoke, mostly in opposition to the store. Many of them are residents of the nearby Glades development. Many of the same people showed up last month as well, but no public comments were allowed.

At next week’s meeting, only commissioner discussion will be allowed, but it is almost certainly guaranteed to be standing room only once again.

According to Shawn Moore, executive director of planning and zoning, state law requires the commission to table any discussion for 30 days after a split vote. At next week’s meeting, they will again either vote to recommend the rezoning, to not recommend the rezoning or to not make any recommendation at all.

This is the second controversial project that has been left in limbo over the past few months, and the fourth one over the past year.

In March, the Mercer County Joint Board of Adjustments failed to either approve or deny a conditional use permit for a second Isaiah House drug treatment facility for women on Bohon Road.

On Monday, Isaiah House founder and CEO Mark LaPalme said the treatment facility has made an offer to purchase the former Trim Master’s property as the new location for their corporate offices, which would include billing, human resources and executive staff. LaPalme said they were trying to work out with the city some way to proceed with the second treatment facility.

The widespread opposition to new development leaves county officials in a peculiar predicament. Voters say they want more growth locally. Yet, in every case over the last year where someone wanted to build or modify an existing structure to house a new business—a clinic on South College Street, a drug rehab facility at the former Harrodsburg High School building, the Isaiah House expansion and the Dollar General by Herrington Lake—dozens of people have showed up to voice their opposition.

In most cases, opponents cite the same concerns, including traffic and community safety. But one of the biggest concerns may be property values. At the hearing for the Isaiah House expansion, opponents cited studies showing that opium addiction treatment centers reduce surrounding property values by up to 18 percent. Many of the those who spoke against the Dollar General in March raised similar concerns.

“I can’t make myself believe this is going to help our property values at all,” said Betty Moffitt, who lives nearby the planned development.

But residents may need to consider another factor that can impact property values: abandoned houses.

Durham said he had no idea how many empty buildings there were in Mercer County.

“There are more than a few,” he said.

The opposition to the Dollar General leaves the property’s owner, Paul Barnes, confused. Barnes said earlier this month that 95-percent of the people he’s asked want the store built.

“It’s not going to create more traffic,” he said. “They act like people in Burgin are going to come down here to get a gallon of milk.”

Barnes, who also owns the Chimney Rock Marina, said the store would ease traffic, not increase it. He said it would be convenient for visitors, who would no longer have to travel to either Burgin or Bryantsville in Garrard County to buy groceries.

“It’s a whole lot better to be a Dollar General store than for me to put in a residential development,” Barnes said.

Terri Bradshaw, the new economic development director for the City of Harrodsburg, is currently gathering information from 15 groups. In April, Bradshaw met with members of the planning and zoning commission, the board of appeals, the Mercer County Fiscal Court and the Harrodsburg City Commission.

Many of the those present expressed frustration with being pressured to jump start the local economy while being lobbied by voters to make sure the development didn’t happen next to their homes.

“This community is resistant to change,” said one official. “Everybody wants new businesses, but not in their backyard.”

Bradshaw said sometimes leaders have to make hard decisions, even in the face of what can seem like massive opposition.

The Mercer County Joint Planning and Zoning Commission will hold a special called meeting on Tuesday, May 7, at 4 p.m. on the second floor of Harrodsburg City Hall (109 Short Street).