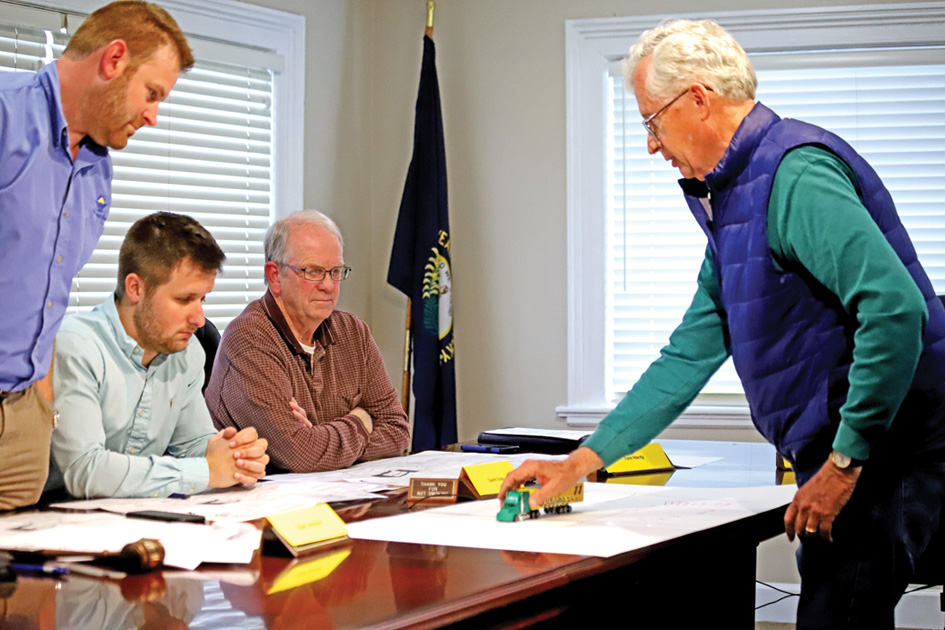 It was standing room only at last week’s meeting of the Mercer County Joint Planning and Zoning Commission.

The majority of the audience were there to voice their opposition to the proposed building of a Dollar General store at the intersection of Ashley Camp and Chimney Rock Roads.

Paul Barnes, owner of the Chimney Rock Marina, is asking for 2.33 acres of property he owns to be rezoned from residential to business.

Barnes’ attorney, Steven A. Dexter of Sheehan, Barnett, Dean, Pennington, Little and Dexter in Danville, said it was similar to a zoning change the committee had made to allow storage units nearby. Dexter said the property was no longer suitable for a private residence because of the commercial development nearby. He said the area, which also includes Boat Doctor, is becoming a rural commercial center.

Dexter called Kennedy Mill Bridge Road one of three major roadways in Mercer County and said additional traffic on Kentucky Route 152 should be anticipated as the county continues to grow. Dexter said the store would not change traffic and said residential use of the lot was not “feasible.”

Will Stevens with Vantage Engineering said the latest traffic study in 2017 showed 1,800 cars a day went through the area. Stevens said the 9,100 square foot store would have 30 parking spaces. In addition they plan to widen Ashley Camp Road four feet to provide more room for vehicles.

“There will never be a parking crunch there,” Stevens said.

He said they hope to hook into the new sewer system, but if they couldn’t there was room on the property for a system.

“If this is improved, Dollar General has committed to a 15 year lease,” Stevens told the board.

Several residents spoke for the proposed store, including Sue Prather, who said it would be more convenient for some residents who lacked transportation to travel to either Burgin or Bryantsville in Garrard County, which both have Dollar General Stores.

“It it would be a positive thing,” Prather said.

But the vast majority in attendance—many of them residents of the nearby residential development—spoke against the rezoning.

Tim Meadows said he’d lived on Persimmon Way for 15 years. He called the intersection unsafe. Meadows and several others complained about the design of the lot, especially that traffic entered from Ashley Camp Road.

Paul Barnes said it was hard to see from the left on Chimney Rock driving onto 152.

“From Ashley Camp, you can see all the traffic,” Barnes said. “I think it would be better suited where it’s at.”

Judy Pinalto, who also lives on Persimmon Lane, worried about delivery trucks ending up in her neighborhood. “They’re going to wind up on our private road,” Pinalta. “We’re going to have accidents.”

“I can’t make myself believe this is going to help our property values at all,” said Betty Moffitt.  Moffitt said the store would serve mainly lake visitors but that she lived on the lake all year long.

Chad Powell, a former assistant chief of the Harrodsburg Police Department who lives on Ashley Camp Road, worried about the lack of police protection and presented a petition to the board.

Greg Hunter, who lives on Carmichael Road, said it would be impossible for delivery trucks, especially semis, to turn around.

“I bought a house out in the country,” Hunter said. “I don’t want to live near a business.”

“I really don’t feel we need another commercial business,” said Robert Clark, whose family has owned property in the area since 1883. Clark said he could fill up a five gallon bucket with all the beer bottles and beer cans he finds on his property.

While he said he could say nothing bad about Dollar General, he called changing the zoning a mistake. “I don’t think this is a prime location for that type of operation,” Clark said.

Under planning and zoning regulations, the applicant is allowed to have the final word. Dexter said a lot of important concerns had been brought up. They would be appropriate if a site plan was being submitted, but Barnes was only seeking a zoning change.

Dexter said the proposed use was complementary to the residential resort area.

“You already have a centralized rural commercial district, whether you like it or not,” he said.

He said he didn’t know if there was a deed restriction, but called it irrelevant. He said the storage units were part of the same tract.

“It should be of no concern at a zone change hearing,” said Dexter, who called the deed restriction a part of the due diligence for a potential owner.

A resident rose to argue with Dexter, but planning and zoning Chairman Adam Johnson instructed him to remain seated. He told the crowd there would be two votes, one for the zoning change, and another to approve the site plan. Then Johnson asked Shawn Moore, executive director of planning and zoning, for his recommendation.

Moore said the lot was located within 500 yards of mixed-use commercial and recommended the application be approved.

However, board member Mike Harden moved to postpone the vote until he looked at the comprehensive plan.

“My gut tells me it’s not compatible,” Harden said. The board voted to reconsider the application at their next meeting on Tuesday, April 9, at 5:30 p.m.

The next meeting of the Mercer County Joint Planning and Zoning Commission will be on Tuesday, April 9, at 5:30 p.m.