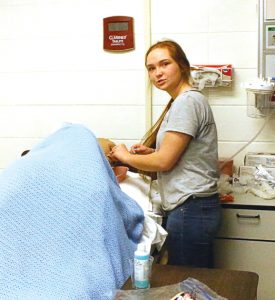 Makinsey Hurst takes part in her registered nurses aid class Monday at the Trailblazer Academy, in which school districts work together to provide more pathways than any school could provide alone.

The Hughes-Jones Harrodsburg Area Technology Center has been undergoing changes for the last year as the institution transforms into the Trailblazer Early College and Career Academy. The technology center, which is located on Tapp Road will is getting a new name and possibly a new partner.

The building will remain the Hugh-Jones building but  will officially be known as the Trailblazer Career Academy with over 15 pathways, under six core subjects, the name change  is just the beginning of growth for Trailblazer with the combined resources of three counties.

The counties of Mercer, Boyle and Anderson currently participate in the programs that started in August and the addition of Franklin County is anticipated for the next school year according to administrators.

HATC principal, Tony Webb said he is looking forward to the growth and expanded by saying, “pooling resources helps every student find what works for them.”

Webb said he has ordered the new sign for the facility and he is excited for the transition to be completed.

“Another big aspect of this is the teamwork from all campuses,” said Webb. “We have businesses, different personnel and staff all working together for the good of the kids.”

The Trailblazer planning committees have held forums for business and industry input on what they would like to see. They are planning another forum in mid March.

“Adding businesses to the planning phase helped the committees know what employers are looking for in an employee,” said Webb. “It took a lot of work by numerous people to just sync the class schedules.” 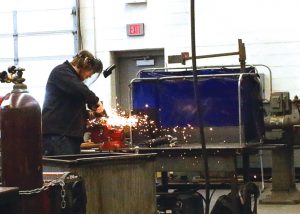 Webb was referring to conforming to a six period day and a semester system. Anderson County originally worked in a trimester and Mercer County schools had a seven period day.

“Logistics and transportation have caused a few ah ha moments in our first year,” said Webb. “We have also included an eighth grade hour rotation to prepare students.”

Webb said for Anderson County eighth graders, senior students travel every week to present pathway opportunities since the transportation was unrealistic for only an hour of course work.

Including the eighth graders to prepare them for joining the academy is just part of the plan said Steve Rinehart, Vice Chairman of the Trailblazer Academy Steering Committee.

“This academy has a four year implementation plan,” said Rinehart. “We are serving students in parallel with implementing new policies.”

Rinehart said the ultimate goal is for juniors and seniors to be able to stay at the Trailblazer campus all day. In order to do that core classes must be incorporated into the programs. Rinehart also said soft skills and basic work ethics are also part of the programs. Duel credit and college courses through Bluegrass Community and Technical College are already available and will be more accessible after Danville finishes their new manufacturing facility that is currently being built.

“We want to move from a push system to a pull system,” said Rinehart. “Instead of us pushing kids out and hoping they will find employment we want businesses pulling kids into pathways so they can be hired after graduation.”

Rinehart said the inclusion of businesses in the planning phase will help transition the academy to the pull system.

“Each school system is overcoming barriers and pooling resources to offer students opportunities,” said Will Begley, superintendent of Burgin Independent School. “Frankfort will hopefully contribute their aviation and aerospace pathways when they join.”

The collaborative effort to bring more duel credit courses, career pathways and resources to students is increasing the number of students being both college and career ready.

“There were two main barriers for the school systems to create new opportunities for students,” said Begley. “To get them to leave the comfort of their main campus and overcoming the stigma of vocational school.”

All three administrators agreed they would eventually like to see businesses take ownership of pathways and contribute significantly to education planning to produce the employees they want.

The administrators also said they would like to mention the hard work of campus counselors in pulling the four different schools together. It was agreed it wouldn’t have been possible without their dedication and effort.

For more information on the Trailblazer Early College and Career Academy contact any school guidance counselor.