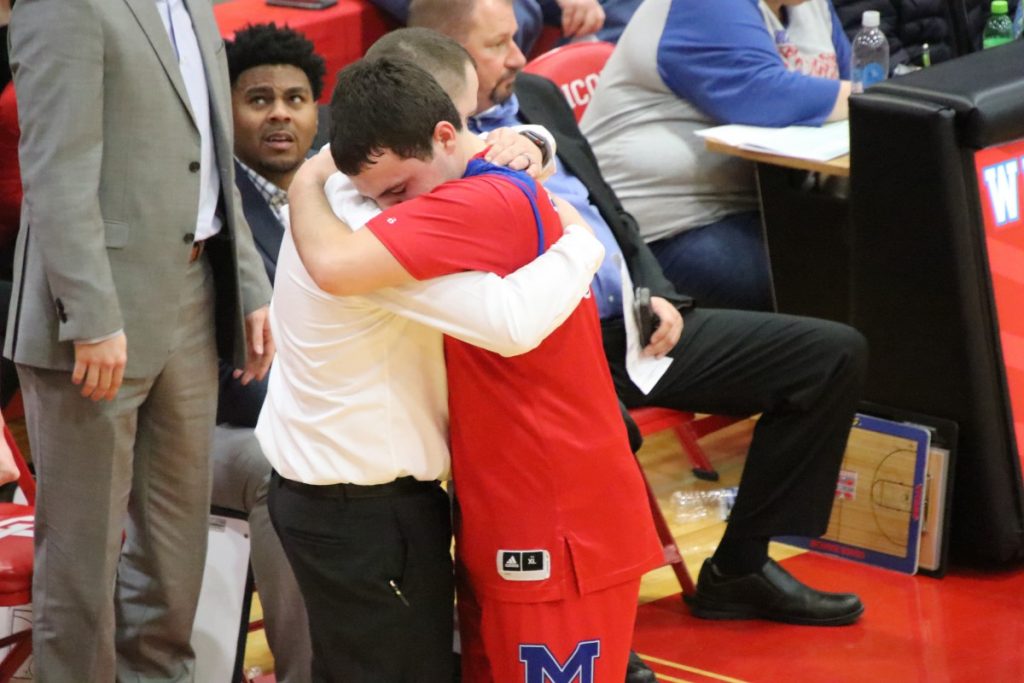 Mercer County Head Coach Josh Hamlin embraces senior Nathan Tatum after the final high school game of his career against Lincoln County in the first round of the 12th Region Tournament on Tuesday, Feb. 26. (Photo by Arpan Dixit)

It’s not how the Mercer County Titans (18-12) wanted to end their season, but the region tournament is always full of surprises. Lincoln County’s Baylor Mattingly scored 18 points (6/10 from 3) in his first varsity start to lead the Patriots (21-12) over the Titans by a final score of 56-46 in the first round of the 12th Region Tournament on Tuesday, Feb. 26, at Lincoln County High School.

Mattingly started in place of freshman Jaxon Smith, who was battling the flu. The sophomore hit five of his six threes in the second half to help the Patriots gain a 15-point lead late in the second half and advance to the semifinals to take on Wayne County on Friday, March 1.

Wayne County defeated Somerset prior to the Mercer/Lincoln tip.

“He gave them a different element tonight. We found out Jaxon Smith wasn’t playing, but the way our game plan was structured and set up, Smith is more of a driver than a shooter,” said Mercer County Head Coach Josh Hamlin. “Mattingly gives them that option to space the floor. We left him in the corner a couple times and credit goes to him. A kid who didn’t get a lot of minutes throughout the season, stepped up tonight and we just have to tip our cap to him. He was ready for his moment. Our guys battled, and sometimes you get beat by the best player and sometimes you get beat by the role players, and tonight we got beat on the three ball. You live and you learn.”

Despite Lincoln only hit one more three compared to Mercer, it was the timeliness of those threes that proved to hurt the Titans.

Mercer County junior Kaelin Drakeford had a big game. He scored a game-high 18 points and hauled in 16 rebounds. He scored 13 of those points in the second half to keep the Titans in the game. Senior Carter Baughman was held in check for most of the game, but still scored 14 points and dished out a team-high three assists. They were the only Titans in double figures.

Junior Jamisen Lewis started off the game strong with five points in the first half, but didn’t score in the second.

The Patriots played catch-up in the first half until the final seconds of the second quarter. Darius Napier’s three cut the Titan lead to one and Blake Smith’s two free throws gave Lincoln a 19-18 lead at the half.

The Patriots started the third quarter on a 7-0 run and never trailed again. After Mattingly drained two triples late in the third, that gave Lincoln their first double digit lead at 34-24. The Titans made a run of their own to end the third after Nathan Tatum’s back-to-back triples to end the quarter at 34-30.

Mattingly was a key part in another run, 16-8, for the Patriots in the middle of the fourth quarter. He nailed his final three triples when it mattered most.

After the game, Hamlin spoke about his seniors, whom he embraced at the end of the game.

“They are just an outstanding senior class,” said Hamlin. “They are outstanding young men who come from great parents. Being a young father and having my son around the program every single day, and to see the way those kids go out of their way to embrace my son, to make him feel special and apart of the program is something you can’t emulate. That’s not fake. That just shows the type of people they are and that’s what I’ll always remember about them.” 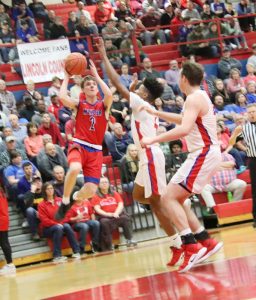 Senior Carter Baughman drives baseline for a floater in the first half. 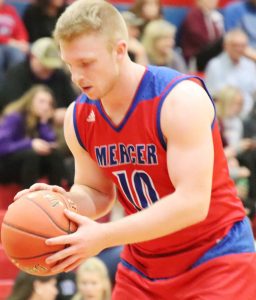 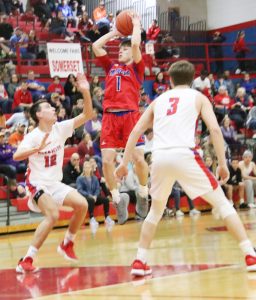 Junior Jamisen Lewis pulls up for a free-throw line jumper in the first half. 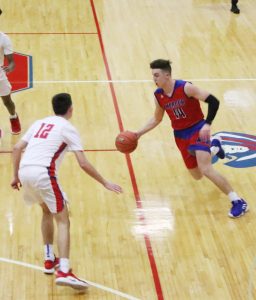 Junior Kaelin Drakeford leads the fast break in the second half against Lincoln County. 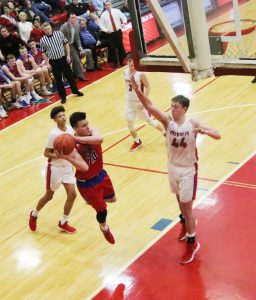 Junior Trey Price drives baseline and looks for an open teammate late in the second half.