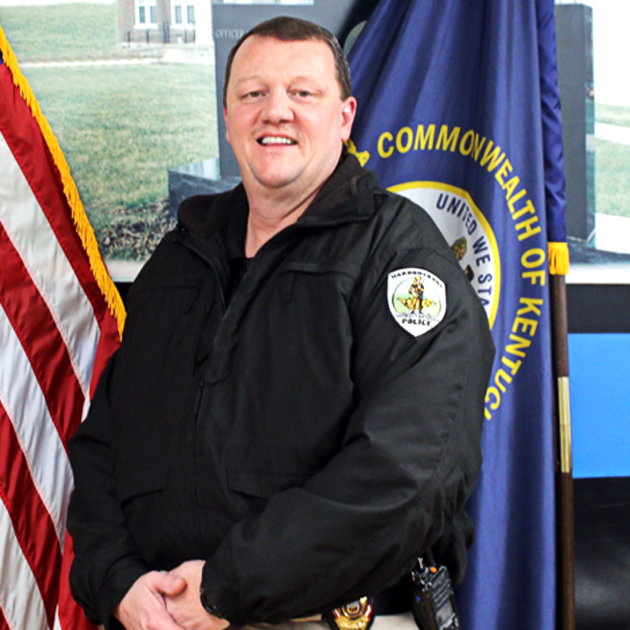 Chief Brian Allen joined the Harrodsburg Police Department in 2005. “I am proud of being part of the evolution of this department,” said Allen. “We have come a long way.”

Harrodsburg Police Chief Brian Allen began his career as a patrolman in Magoffin County in 2002. He joined the Harrodsburg Police Department in 2005, working his way up to chief when he took the position in May 2018.

“I am proud of being part of the evolution of this department,” said Allen. “We have come a long way.”

Allen is referring not only to the amount of officers but the increased technology the department has acquired. He said his big goal is to maintain the officers he has and keep them employed with the department as long as possible.

“The commissioner and mayor have been very supportive of our department,” said Allen. “We have 21 officers now and that is the most this department has ever had.”

In addition to more officers, Allen said the department has advanced in technology including body cameras for every patrolman, new computers for the cars and half the fleet has car cameras. Allen expects the other half of the fleet to be updated with cameras in the next year or so.

“The new computers help keep officers in the field,” said Allen. “They can do citations and reports from their car.”

The Harrodsburg Police Department is set to move to their new location on U.S. 127 in March.

“The new facility will be a state of the art showroom for public safety,” said Allen. “It should increase our response time as well.”

Allen said communications will continue to be run out of their current facility.

The department has been praised for two major drug busts in January but Allen says busts are never enough to combat the drug epidemic.

“Drug enforcement is a never ending battle. We respond to every tip and do everything we can but it is constant,” said Allen. “It is a cycle and we try to stay in front of it the best we can.”

Allen said that the Harrodsburg Police Department is community oriented and their main purpose is to investigate crime but he wants more.

“We also want to improve the quality of life in our community,” said Allen. “We want to have open communication with businesses, churches and community centers so that we can know how to better serve the community.”

Allen said with better communication the department can be more proactive in the epidemics facing our community.

“It takes us all to improve our community,” said Allen. “This community has always treated me like I was a native and I am honored the citizens have given me an opportunity to serve.”

Allen said the Harrodsburg Police Department is always open and willing to listen to citizens. He believes that is the key to improving the quality of life.

“This is my home, I am always available and I want to know how to help,” said Allen. “I am here to work for the citizens.”