Imagine A Cold That Never Ends 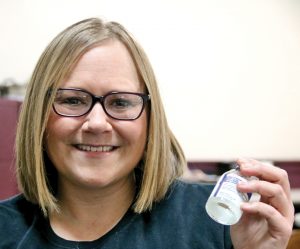 Krissy Goodlett holds up a bottle of the plasma used to treat common variable immune deficiency. Goodlett is trying to get the word out about CVID, which can lead to complications—including early death—if left untreated.

A Mercer County woman is trying to get out the word about common variable immune deficiency. While CVID, which causes an increased susceptibility to infection, only strikes one in 25,000 people, Krissy Goodlett thinks there might be a lot more people out there suffering from it.

Goodlett should know. She was diagnosed with CVID six years ago, but she said she’s been suffering from the immunodeficiency for most of her life and didn’t know it.

Imagine having a cold that never ends. That’s what life was like for Goodlett, who said she suffered from constant sinus infections.

For CVID sufferers, the most common types of recurrent infections involve the ears, sinuses, nose, bronchi and lungs, according to the American Academy of Allergy, Asthma and Immunology.

The problem started when she was in the eighth grade. Goodlett contracted idiopathic thrombocytopenic purpura (ITP), an immune disorder which prevents the blood from clotting normally. Doctors were successful in treating the disease, but Goodlett said she’s never really felt well since.

“Ever since then I’ve been sick,” she said.

While CVID is thought to be due to genetic defects, the exact cause of the disorder is unknown in the large majority of cases. Goodlett said 90-percent of the people who’ve been diagnosed with CVID also had ITP when they were younger.

“I’m the only one in my family who’s had it,” Goodlett said.

All she knew was that she was sick, but when she went to doctors, she would be told she only had a cold. A cold that lasted for decades.

According to the American Academy of Allergy, Asthma and Immunology, adults and children who suffer from constant infections such as pneumonia, sinusitis, ear infections and gastrointestinal infections—especially those who have contacted ITP, should be tested for CVID.

The problem, Goodlett said, is that even though CVID is a relatively common immunodeficiency, most doctors don’t know anything about it. While there is a test, few doctors ever order it.

“Who’s to say how many people have it and don’t know it?” Goodlett said. “People are going undiagnosed.”

CVID can be found by measuring either immunoglobulin levels or the number of B cells in the blood. Goodlett thinks if more doctors ordered tests for CVID, it could help people like her get treatment earlier.

By the time doctors had figured out what was wrong, her lungs were irreparably scarred, she said.

Since 2017, she has been undergoing immunoglobulin replacement therapy— plasma infusions—as well as antibiotics to treat infections.

“I have to stick needles in my stomach every week,” Goodlett said.

Even with treatment, CVID patients are still susceptible to infections.

“A cold can kill us,” Goodlet said.

That’s why Goodlett is  trying to get the word out.