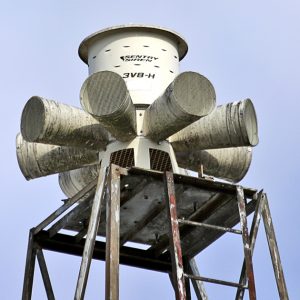 On Tuesday, the Mercer County Fiscal Court approved installing a weather siren—like this one, which sits on top of the post office—on Herrington Lake. County officials hope to have the siren up and running by the spring.

Homeowners along Herrington Lake will soon be in the loop.

Over a year ago, lake residents came before the fiscal court and asked for a siren to warn them about extreme weather events.

The county applied for and received a $22,000 federal grant from the Department of Homeland Security to install the siren.

Judge-Executive Milward Dedman said he had spoken with Paul Barnes, owner of Chimney Rock Marina and Restaurant, who seemed amenable to installing the siren on his property.

The fiscal court agreed to pay $501.20 in excess of the federal grant for an electric siren project, which was recommended by the director of the Mercer County Emergency Management Agency over a battery-powered option.

Judge Dedman said they hoped to have the siren installed by the spring.

Sheriff Ernie Kelty asked the fiscal court about the equipment request made by the Mercer County Sheriff’s Office at the last meeting.

The sheriff’s office wants  to use the excess fees from 2018 to buy 10 Microsoft Surface Pro notebooks, which can be used in the office or in patrol cars.

Judge Dedman said the sheriff’s office has to turn in the excess fees, then the fiscal court will have to pass a budget amendment.

The sheriff said his office is in the process of ordering a new truck.

In other business, Judge Dedman said there will be a joint meeting of the Mercer County Fiscal Court and the Harrodsburg City Commission on Thursday, Feb. 21, at 5:30 p.m. A site has not yet been determined, Dedman said.

The next meeting of the Mercer County Fiscal Court will be on Tuesday, Feb. 12.