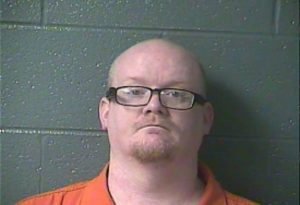 A convicted sex offender is back in jail after police say he made lewd and sexual comments to a juvenile female on social media.

Larry Ray Coffman, 35, of Harrodsburg, was arrested on Saturday, Jan. 26, at his place of employment without incident, according to a press release from the Mercer County Sheriff’s Office.

Coffman used Facebook Messenger to try to induce a minor into performing a sex act on him, according to the arrest citation. He also sent the victim a “provocative picture.”

Coffman was convicted of 2nd-degree rape and 2nd-degree sodomy back in 2005. According to the court records, the victim was 11 years old.

He has been charged with 1st-degree unlawful transaction with a minor under the age of 18 and is being held at Boyle County Detention Center on a $15,000 bond.

Capt. Scott Elder of the Mercer County Sheriff’s Office made the arrest.

According to the sheriff’s office, the case remains open with additional charges and arrests possible.